Mystery Jets: “We only listen to Dark Side Of The Moon once a week” – Interview 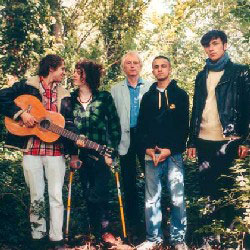 Of all the bands hoping to make it big in 2006, it’s unlikely that you’ll find anyone else quite like Eel Pie Island’s Mystery Jets.

For starters, their founding member is a 55-year-old architect called Henry Harrison, who decided to form a band with his son Blaine and his childhood pals – an anomaly, you might say, especially in the current musical climate.

Musically, it’s also like nothing else at the moment – a bizarre mixture of kitchen utensil instrumentation, Beach Boys melody and Pink Floydian otherworldliness – amongst many other things, of course. They play gigs with a backdrop of Turkish rugs, and a picture of a youthful Syd Barrett watches over them, almost like a guiding spirit.

But if you think this sounds a little too left field for comfort, think again – the Jets are set to be one of this year’s biggest hits, and have an opening slot on the annual NME Brats tour and an album due out in March on 679 to prove it. musicOMH took the plunge and decided to delve a little bit more into their mystical world when the tour hit Nottingham recently…

In a makeshift cafeteria in Rock City’s neighbouring venue The Rig, I’m sat at a table with Henry, guitarist Will Rees and drummer Kapil Trivedi. They’re in jovial mood, gearing up for yet another show. I begin with the obvious query as to how it all started, hoping for a concise, myth-busting response.

Kapil, assuming the role of band historian, pipes up: “Henry made Blaine (lead vocals) play music…well he didn’t make him play music, he encouraged him to play music because he knew Blaine was going to be…different, a misfit. And then one by one, members started to join. Will joined very early on…”

“Will was there from the beginning” interjects Henry, keeping things in check. Kapil continues: “Kai (Fish, bass) joined about six years ago, and then I joined about three years ago.”

“We only listen to Dark Side Of The Moon once a week!”
– Mystery Jets are slowing starting to take in new influences…

Moving on to influences and inspirations – who exactly are the groups and musicians that have possessed them to make the bizarre but hugely compelling racket that they do?

What about Pink Floyd? Those psychedelic, all engulfing sounds didn’t come from nowhere, I venture. “Pink Floyd was like a founding influence on us, I don’t think we listen to Pink Floyd anymore,” responds Will. “We only listen to Dark Side Of The Moon once a week!” Henry adds.

And are their traces of Messrs Barrett and Gilmour in their music? “In the longer songs, yes, I mean it’s not so evident in the shorter songs,” Henry suggests.

Whatever the case, it’s clear that their sound is about a million times removed from the relatively simplistic arrangements of garage rock, ’80s revivalism or Britpop – the latter being quite a dirty word in this camp.

Henry shakes his head and scowls at the very mention of bands like Blur and Supergrass. Will elaborates: “If you listen to those records like Parklife and (What’s The Story) Morning Glory ?, they’ve dated, they remind me so much of ’94/’95, and I’d rather not be reminded of those years frankly.”

Quite apart from this unconventional noise, their lyrics hardly speak of the everyday grind that many other bands are content on immortalising into songs. You won’t find any tales of cash machines or twenty two grand jobs here – their breakthrough single of last year, in fact, was about a man called Dennis, and its follow up concerned a transvestite called Agnes.

“We had this series of free gigs, and the last one there were 600 people there, and the noise police turned up and shut us down” – On how the residents of Eel Pie Island pulled the plug on their party.

Explains Henry: “Dennis was my accountant. He got motor neurone disease, and died in about nine months. Will wrote the music, and it’s a meeting of a very optimistic musical refrain with actually quite dark lyrics – I think that’s part of our sound.”

And how would they describe this sound to the casual listener? “Multi pronged?” suggests Henry. “There are layers of meaning, definitely,” agrees Will. “There’s an accessible layer at the top, then it gets darker as you go down,” offers Henry.

He continues, explaining the perfectionist ethos that he’s helped to enshrine into this group: “We do hate repeating ourselves, if the song threatens to go into the same groove as the previous one, we tear it up and start again.”

Says Will: “We hate starting songs in the same way, we always try and start a song in a different way – like Zoo Time’s got the chant in it, and On My Feet’s got that kind of rhythm and Dennis has got this minimalist loop with harmonica on it.”

This mish mash of noise, although starting to make waves around the UK, is no longer welcome at their home of Eel Pie Island, I’m informed – somewhere they’ve been playing for many years. Despite its great musical tradition (The Eel Pie Hotel was the scene of legendary performances by The Stones and The Who), the local residents have decided to pull the plug on their party.

“We had this series of free gigs, and the last one there were 600 people there, and the noise police turned up and shut us down and threatened us with fines. That was the last gig we held, that was back in June of last year,” laments Henry.

Nevertheless, they still managed to commit their songs to record on the island itself, a process that they assure me was a vastly enjoyable one.

“There was just something very special about working with this producer James Ford and all of us being in a really positive frame of mind. We just set up in our studio on Eel Pie Island, and it just all came out. It was weird how it happened, it was such a creative and open minded time, and we were working late into the night, and just experimenting with stuff. It’s the best way we could have made our album,” recalls Will fondly.

“It was such a creative and open minded time, and we were working late into the night” – On recording their debut album Making Dens.

And it’s likely these songs of which they speak will find their way into many a household come its release in March, something which the illustrious opening slot on the NME tour – a position held by Franz Ferdinand and Kaiser Chiefs in recent years – should help precipitate. But with the massive success of these bands before them, is it all a bit daunting to follow?

“I don’t feel like anyone can really compare us to those two bands,” retorts Will, “Because they’re bands that make pop songs, really, and they’re also bands that write one type of song.”

He goes on: “You watch Franz Ferdinand, it’s obvious who they make music for, and it’s obvious they’re going to be successful – and they were hugely successful, and still are. I think whether we make it big is much more hit and miss, and probably more likely miss, but we shall see!”

Indeed we shall, but whatever their fate, rest assured that Mystery Jets will always be doing things their own way, free of rock ‘n’ roll clichés – and in doing so providing a musical antithesis to anything at all dull or mediocre. It’s a journey well worth tailing them on.