Natacha Atlas: “I’ll listen to Moby and it’ll just make me think of something” – Interview 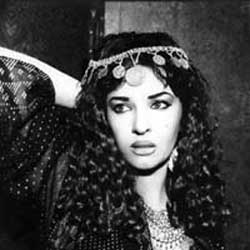 Natacha Atlas is rather good at challenging assumptions. It may help to explain why the belly-dancing multi-lingual singer-songwriter is now a UN Goodwill Ambassador.

She’s recorded with Transglobal Underground and as a solo artist, yet is famed as much for her interpretation of traditional Arabic song structure as her live speciality – belly-dancing. And now she’s following in the footsteps of… Geri Halliwell?

musicOMH decided all this necessitated a chat in her dressing room, as she supped a lemon drink and applied her make-up…

“I’m supposed to be doing some project with children in Morocco,” the diminuitive lady says of her recent appointment as a UN Goodwill Ambassador. Mary Robinson, UN High Commissioner for Human Rights, was supposed to have made a speech in support of tonight’s gig, at which Natacha is supported again by Transglobal Underground.

“What’s happening with Mary Robinson?” asks Natacha of her manager, who enters bearing tea. “She got busy,” comes the response. What with everything happening in Afghanistan it is, I supposed, hardly surprising. “But it is precisely now that some goodwill is needed,” reasons our hostess. She acknowledges that, like with almost all governmental organisations anywhere, getting the UN to do anything is often a challenge, but for all that she was pleased to be asked to do the job, whether Ms Halliwell enjoys the same title or not.

We’re on the subject of politics, so I ask what she makes of the Afghanistan crisis and, more specifically, the Taleban’s interpretation of Islam in regard to their treatment of women. “I think something positive can come out of it. An acknowledgement needs to be made generally that there is a clear distinction between faith and people using religion for a political agenda. What the Taleban did was blasphemous and totally un-Islamic,” she intones in an increasingly passionate voice. It is clear that as far as that regime’s treatment of women goes, she holds no respect for the Taleban’s philosophies.

“An acknowledgement needs to be made generally that there is a clear distinction between faith and people using religion for a political agenda.” – Natacha Atlas

The Taleban would have a job trying to subdue this lady anyway, if rumours are even slightly founded in fact. Didn’t she once go at Transglobal Underground member Count Dubullah with a knife?! “Oh, that was a joke,” she says airily. What of those who say she has a Jah Wobble-esque temper? She shakes her head slowly. It seems that she is still in touch with erstwhile collaborator Wobble too. Recently, she entered the studio with him again for “some low budget ambient thing” he was working on. Not his recent collaboration with Bill Laswell, Radioaxiom? “I don’t know. I’ve not heard it. All I know is I went into a studio, he was there and I sang,” she says enigmatically.

Well, we seem to have come in a roundabout way to her music. She tells me that Nitin Sawhney is involved in co-writing her next album which “will be much more ambient, more western”. Recorded in Greece and mixed in Rome, the new album is already being played by DJs apparently. She’s been circulating demos… “It’s seriously, seriously chilled out. It’s the sort of thing you could do yoga to – maybe even fall asleep to. There are beats on only two tracks.” Is she going to join Goldfrapp on Cafe Del Mar compilations? “It’s probably too chilled out for that…”

The new album is expected out on Mantra, the label Natacha Atlas has been signed to since leaving Nation Records. I was curious about why she switched companies and she was happy to explain. The licencee, the label and the artist were all in the UK so it didn’t make sense to have a licensee, which is what Nation was. And besides, Mantra was doling out the cash, she says, before giggling and beginning to apply make-up.

“It has a rawness, a… ‘cocquettishness’, in culture, language and mentality.”
– Natacha Atlas on belly-dancing

Her relationship with the music industry fits well with her self-confessed duality. She was once quoted as describing herself as “a human Gaza strip”, her ethnic make-up including Jewish and Arabic elements warring with each other to cause her something of an identity crisis – but she’s over that now. “That was 10 years ago,” she points out. “I don’t feel like that any more.” What does she feel like now? Citing her recent album Ayeshteni, she says she feels more exhausted than anything else now, having worked solidly for the last eight years. “I sometimes feel like I’ve got nothing left to say, and it’s very hard to write when you’re in a mood like that. Everything’s been said so many times that we’re just not learning anything. But sometimes music itself will make me write something, like, I’ll listen to Moby and it’ll just make me think of something.”

With her legendary belly-dancing routines and outlandish costumes, Natacha Atlas is a visual feast live. Yet she often starts gigs looking nervous, leading me to wonder what she makes of her audiences. She cites by way of explanation a gig at Olympia, Paris, at which the promoters had told the crowd she was to appear at eight when she was in fact to appear at 10, after several other acts. The French public appreciated a Syrian collective, whose music went well with her own Arabic style, but the label then added two more acts, “against my advice”, one of which was Natasha King. The crowd were horrible to them. “They weren’t playing Arabic music, so the crowd went ‘BOO!’,” she snorts. “There was chaos backstage because the first act was late and everything just got steadily more chaotic.” So much so that, by the time she finally took to the stage, she faced a very hostile audience. “I got a standing ovation at the end, but I worked my ass off for that and I don’t like having to work that hard. You lose the buzz.”

If she does appear nervous when she first takes to a stage, she soon loses the nerves when she gets her belly out. She agrees that the belly-dancing routines do relax her. “I really enjoy that, locking in with the accents and the rhythms. It focuses and is slightly meditational.” Anyone keen to emulate her example and belly-dance their way to notoriety can now choose from a selection of good schools, but for Natacha Atlas belly-dancing is simply part of her.

“I learned it by watching old Arabic films from an early age. I was only taught for about a month. It has a rawness, a… ‘cocquettishness’, in culture, language and mentality.” She returns to the subject of women in Islamic countries. “Women can’t really say what they mean outwardly because the language isn’t there for it, which is something European women don’t often realise. So the belly-dance is more… raw within Arabic culture. European dancers who’ve learned it tend to be more balletic.”

Tarred with the ‘world music fusion’ brush throughout her recording career, Natacha would like to somehow transcend that barrier. “The world music fusion thing goes round and round in circles and doesn’t get anywhere. The music industry is still… prioritised around unit sales, hype and backscratching, bullshit.”

Asked what her New Year’s Wish would be, she continues the theme. “That’d be my selfish New Year’s wish, that I could cut through all that. But the bigger one would be that a new world order could be started, where people take responsibility for what they do.” There’s a pause and, just when I think she’s finished, she pipes up again. “I have a third wish, but that’s too personal to tell.” Suddenly, having been serious about the music business and politics, she giggles, sighs, and carries on with her make-up.