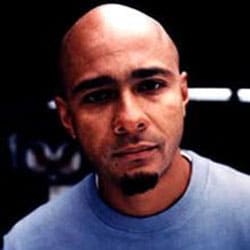 Mention the name Nightmares On Wax and onename heads the queue of musicians who’ve contributedover the years, the driving force GeorgeEvelyn.

Contrary to popular misconception Evelynisn’t a Sheffield boy – the Nightmares are from Leeds.And they’re an outfit that have built up a formidable15 years’ service to music, electronic andotherwise.

In A Space Outta Sound is the latest opus,and musicOMH wants Evelyn’s opinion on its worth.
He’s a friendly, slightly gregarious man whoimmediately sounds at ease, talking for minuteswithout need for intervention. And when he talks aboutmusic, and his role in it, there’s no stopping him.So, the new album?

“I just think it’s all about makingtwenty plus tracks and choosing the best of the bunch,and hopefully that leaves a bit of wanting at the endof it, and I try to do that. It’s not an easy thing todo though! I feel like the sound’s matured, and I feellike I’ve found myself more on this album.

“I think theessence has always been there, the elements, and Ikind of feel like I’m gonna make music for ever now! Iknow what my sound is, what my feel is, I know whatI’m into. It’s me going deeper into my musicalupbringing and trying to exaggerate that. Actually Ibelieve that I just exaggerate all of my musicalinspirations.

The implication is that Evelyn is happy to leavegenre aside and just do what comes naturally. “Yeah,because I think trends end, that’s what they do. Ijust don’t think making music is about that. Yourealize that when you look at your mentors, they’vejust done their own thing, and it’s the self indulgenttypes that hit the nail on the head, they create theirown bubble and their spirits are unquestioned tothemselves, to anything. It’s all about being contentwith yourself when you’re being creative.”

Deep thoughts indeed. But Evelyn never gives theimpression he’s about to vanish into his own privateuniverse. That is abundantly clear when he talks abouthis recruitment policy for guest vocalists. “We kindof find each other, I never seem to have to look toofar. China B worked on the last album, but used towork behind a bar. I didn’t even know she was asinger! She’s a great lyricist, great with melodiestoo.”

Evelyn clearly has fond memories of a sharedexperience that inspired the album track Flip Ya Lid,with vocalist Ricky Rankin. “When we were doingfestivals and stuff, we just got on. We’d bump intoeach other a few times that summer in 2005, and in theend he came up to do a chorus on a track for me, anddid it so quick that we said ‘oh we’ve got loads oftime here, let’s do something else’.

“So in betweenthat he wanted to get a bit of weed, and it was prettylate at night, so when we got to the perimeter therewere loads of riot police about, and he was a bitfreaked out by it, and this van pulled up at the sideof my car with all these riot police in it, shiningthe torch into my car! So it freaked him out a bit -and this was a guy that lived in Brixton! So we jumpedback in the car, and started knocking a beat together,and he started freestyling, and it worked – and thatwhole song is just about people flipping their lid,and they just need to calm down. It was just borne outof that element of what’s round you at the time.”

Warming to his task, he moves on. “And then there’sMoses, who I’ve known for about ten, twelve years, andwe were trying to write the track Damn. I couldimagine a kind of gospel choir on it, and he’s anex-church man, so he’s got contacts. He did theproduction on the gospel choir, and I produced sometracks to his album.”

Are all his collaborations so successful?”Sometimes when you get people into the studio itnever comes off, you try and force the issue. I’ve hadclashes of characters, it’s like fucking hell there’ssome egos in the studio! I think the most importantthing about those scenarios is how good a producer areyou, and how do you manage that situation? At the endof the day it’s all about what you can get out of thattime.”

Nightmares on Wax remain on the Warp label, one ofthe first to sign to the Sheffield imprint. Evelyn,characteristically, is at ease with their positionwith the company. “I used to go through years of pressand promo where people would say, ‘what’s it feel likebeing on a techno label and you’re not techno?’ andit’s like a lot of people think we all sleep togetheror summat! Now I have, ‘what does it feel like beingon the label and there’s loads of guitar bands onthere?’ It’s just a record label. You’ve got to givethem credit, they’ve built themselves up off the genreoff the beginning but they’ve expanded that, they’vehad a long vision, the ambition’s there and thehunger’s there. I’m the same when it comes to puttingthings out.”

Quite a contrast from some of Evelyn’scontemporaries who’ve been harmed by opting for themajor label route. “I know so many amazing musicianswho’ve done the grandiose thing but now they’refucked, they don’t even know who they are any more,they can’t recapture that thing that was special aboutthem.”

Evelyn has successfully toured the album this year.”The best way to represent this album is on a soundsystem, we’ve used probably the best sound system inthe country, it represents where Nightmares on Waxcome from. It’s not like watching a DJ set, as we’vegot the vocals. Though there’ll be a few rewinds onFlip Ya Lid, I’m sure!”

The new album isn’t the only body of music tobenefit. “When you do the back catalogue you realizewhat gems you’ve got and you imagine them on the soundsystem. With what I’m doing I’ve got a scratch DJ aswell, and we’re trying to create a journey, with theDJ box set up in red, loads of smoke all over theplace. It’s really enjoyable!”

For the rest of the year, Evelyn’s brief has beento “quietly launch my record label, which is Wax OnRecords. It’s for people who are doing stuff that justdon’t have the opportunity to be heard, and I’ve got aplatform, so why not explore that? That’s the reasonwhy the label was launched, so I’m pretty excitedabout that.

“We’ve also had the three limited editionEPs, just as a special treat for the headstrong, andthere’s talk in the pipeline of doing a classic albumset. I know that the Smoker’s Delight album traveledthrough word of mouth all the way over the world, andI’d have to say yes if someone asked me if it was acult album. It just won’t go away, there’s alwayssomething coming up every year with it. But it’s justhard to make that comment about yourself, you knowwhat I mean?”