Nils Frahm: “Playing piano helps me to clean up my heart” – Interview 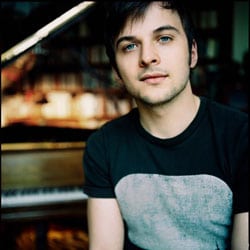 Earlier this year Berlin based composer-pianist Nils Frahm released his second full length album Felt to widespread acclaim. It is a collection of evocative piano-based pieces that has helped cement his position as one of modern classical’s leading figures.

It also contributed to an impressive year for Erased Tapes, who have already released the debut album by A Winged Victory For The Sullen (the collaborative project of Dustin O’Halloran and Adam Wiltzie from Stars Of The Lid) and will also release a new album by Peter Broderick in November.

Frahm has collaborated with several other musicians and runs a successful recording studio in Berlin. He kindly agreed to answer some of our questions.

musicOMH: How did the writing and recording process differ for Felt? It feels as though no sounds have been excluded from the album.
Nils Frahm: The recording process was very different indeed, it was all born out of sonic experiments. I had no straight concept, just a personal affection for closed miced piano sounds. It all lead to Felt and it felt right in the end. I recorded the album at home, which meant that I had all the time I wanted. My last album “the bells” was recorded in two days and I didn’t want to go for that kind of setup again. In order to make my little piano at home sound special, I developed some pretty interesting recording techniques. The sounds I captured lead to the compositions.

OMH: How do you write your music? Is it mostly done in the studio or do you find yourself coming up with ideas in other places?
NF: Most of my pieces come through improvisations, maybe half of the titles on ‘Felt’ are improvised. I also carry a little tape recorde with me all the time. When I play different pianos on tour I get different ideas, since every piano tells a different story.

OMH: You currently live in Berlin. Does the city influence your music in any way?
NF: Hmmm, the atmosphere doesn’t matter too much to me. It is more the exchange of thoughts with all my friends there, like Peter Broderick, Dustin O’Halloran, Greg Haines, Erik Skodvin, Monique Recknagel… to just name a few. It is a wonderful city, but in general I probably would like to live somewhere in nature at some point.

OMH: What else influences your music? Are there any other non-musical factors?
NF: Music is its own little magical place, I don’t know where my ideas come from, but some days I wake up and I can write three songs, then other days I am better at cleaning my bathroom and answering my emails. Life On Earth feels like a challenge to me and I can’t deny that certain things make me pretty mad and sad at times, all these feelings find their way out of my system in a peaceful way by playing my piano. I think playing piano is not about writing songs, it just helps me to clean up my heart.

OMH: The genre of modern classical seems to have really flourished over recent years with yourself and composers such as Jóhann Jóhannsson, Max Richter, Peter Broderick emerging. Do you ever consciously feel part of a group of like-minded musicians or as part of a scene/movement?
NF: Yes, for sure. We are lucky enough to receive such great appreciation, no doubt. Actually I don’t really care what people call my music, but I also know that I wouldn’t fit too well in an academical jazz or classic scene, so it is quite brilliant to have this corner where I can just play the music I want to play and get some attention at the same time.

OMH: Could you ever see a situation where modern classical music created by artists like yourself is viewed in similar ways to traditional/established classical music?
NF: That is hard to tell. I think time will answer the question better than my estimations, but I hope that my music is timeless enough to matter also in a few years from now.

OMH: You have recently recorded collaborations with Anne Mller and FS Blumm. How did these projects come about?
NF: I am a big fan of FS Blumm’s music since I was a teenager, he really changed the way I composed music. So it was a great honour when he asked me to work on an album together and great fun too. I met Anne Müller when I moved to Berlin and I knew that she’s a fantastic cello player. She just heard my earlier electronic work and really liked them, so we decided to marry the computer with some wood and bow.

OMH: Your collaboration with Anne Müller in particular really showed a different side to your music. Could you see yourself releasing more non-piano based music?
NF: Oh yeah, I would love to make some non piano music in the future, I just need to find more time to work some other sounds out. I love the computer as an instrument as well, but in the end I always end up loving the piano the most. It expresses my feelings in the most immediate way.

OMH: Is there anyone else you would like to collaborate with?
NF: I would love to work with many other musicians, like David Darling, Mark Hollis, Thom Yorke, Beth Gibbons and many many others…

OMH: Your music is quite cinematic. Would writing film scores be something you’d be interested in?
NF: Hmm, I usually answer this question with yes and no as being a film composer seems very stressful to me. I also love music when it creates the pictures just by itself, when it doesn’t need the actual picture, but if the right project comes up then I would love to try it. I would insist to work in an unconventional way though, as all these midi string arrangements in Hollywood movies make me want to hide in a dark place and cry for a long time.

OMH: Your live shows seem very intense, personal affairs. Is playing live particularly important to you? Do you approach each show in different ways?
NF: Playing live is very scary, but also rewarding as you meet your fans and you sharpen your artistic knife at the same time. Being in the studio makes you lazy in a way as you always have a cup of coffee in your hands and re-record the same take a million times until you think you did it well enough. When you play live you better do it right at the first shot that is a great way to perform music and since I do it a lot I think I have grown stronger as an artist but also seen the world and met many many wonderful people.

OMH: Will your live shows promoting Felt involve anything different?
NF: One more piano, an old synthesizer and obscure old FX boxes. I will work a little more with processed piano sounds.

OMH: Do you listen to much music these days and if so is there anything you have particularly enjoyed recently?
NF: I would love to listen to more music but what I have been really liking lately is old dub music. Never been a big fan of it, but now I am totally addicted. Pretty weird.

OMH: Were there any composers/artists that were important to you when you were younger?
NF: Many, many. I think the first 4hero album was a life changer and also Dummy from Portishead. My father’s record collection contained music such as Keith Jarrett, Ralph Towner, Miles Davis, Dave Brubeck, Arvo Pärt and so on, all the good stuff.

OMH: Are there any other projects you are currently working on?
NF: I will work with Peter Broderick in a collaboration and many other things which I would rather talk about when they are done. I believe in karma. But for now I will get back to work. There are many nice things on my plate.

Nils Frahm’s album Felt is out on 10th October 2011 through Erased Tapes. He plays London’s Cafe OTO on 12th November 2011. Questions were posed by Steven Johnson.