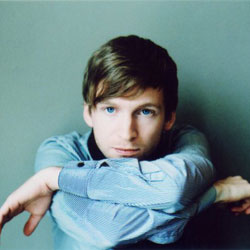 For his second album …and they have escaped the weight of darkness, cinematic ivory-tinkler Ólafur Arnalds has ever-so-slightly broadened his instrumental palette, expanding beyond the piano-and-strings set-up of ballet collaboration Dyad 1909, the recorded-in-a-week collection Found Songs and his earlier material.

Still only 23, his next foray is – inevitably perhaps, given his sparse, evocative music’s atmospherics – into film scores. Compared to contemporaries Jøhann Jøhannsson and Max Richter on the one hand and – to his chagrin – Sigur Rós on the other, he’s gradually amassing a dedicated fanbase.

As he prepared for a concert earlier this summer at Manchester’s Bridgewater Hall, we sat him in front of a camera and asked him some questions. An interview in two parts follows, with an encore of Erla’s Waltz, from the new album, performed solo on piano.

Part 1: Good feelings, metaphors, influences, the curious divide of classical music from the rest of the world, and the state of Iceland

Ólafur Arnalds’ album …and they have escaped the weight of darkness is out now through Erased Tapes.

Video captions, filming and editing for this interview are the work of Peter Harte.