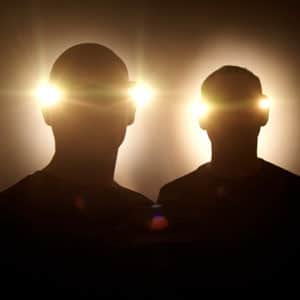 The brothers Phil and Paul Hartnoll are hardly fashionable these days, but as Orbital they are rightly talked about as amongst the very pioneers of dance music as we know it. A decade on from the seminal Chime and, with two new albums coming out within weeks of each other, Orbital are to embark on scoring soundtracks.

And it seems they’ve got gigs coming up too. We chatted with Phil about Orbital’s audience, inspiring weather conditions, Hammer horror, a famous brother-in-law and Fatboy Slim…

Two albums at the same time? Apparently so, as Orbital’s erstwhile record label London Records release a retrospective of their last six albums with the label and the brothers release their Back To Mine compilation of other artists’ work.

We wondered what ended their time with London Records. “Our contract’s run out with them,” explains Phil, “and we decided not to continue with them, hence the retrospective being put out”.

Years ago, a song called ‘Chime’ did rather well in the charts. But that was years ago. What’s made them continue for all this time, while the genre of music they helped to invent has changed almost beyond recognition? “There’s no formula for it,” says Phil. “We do our own thing and see what happens when we release it.”

And they have unfinished business too. “My most unrealised ambition is to come up with the ultimate track,” states Phil. “There’s always some disappointment with what you do to keep you making something else new (after it). And I still listen to stuff out there – there’s enough out there to still inspire me.”

But taking the resolutely indie way to sell records means Orbital’s gigs are particularly important to them.

“Our live stuff helps us because we don’t get a lot of radio play due to not fitting into the normal conveyor belt of the pop world,” he says.

“We’re not a couple of amazing studs who rip our clothes off or anything like that!” Exclusive – and you heard it here first – Orbital are not a boy band. “Yeah, we’re the only band that isn’t a boy band!” laughs Phil.

“Playing live is our format of getting our music out there to people. And we’ve not gone to the dizzy heights of people like Fatboy Slim. We quietly bubble along underneath, and we’ve reached a nice little plateau where enough people like what we do to keep us going.”

The film industry seems to be amongst those people. Orbital are starting work on a film soundtrack – something they’ve said for some years that they’d like to do. As for the film…

But this unexpected step sideways does not spell the end for the band’s touring. “We’ve got five gigs on this year,” he continues. “We’re not going to do any more than that because there’s usually a touring year then a composing year – and it’s nice to sit back and do a film score. Hopefully by the end of the year we’ll have some more stuff. Just because we’re not signed to London doesn’t mean we won’t be carrying on.”

“We’re the only band that isn’t a boy band!”
– Phil Hartnoll

What can their audience expect at these gigs? Phil offers some pointers. “We’ll have projections, lovely screens, flashing lights,” he laughs, “and videos are prepared for each track. There’s lighting production too, to enhance each track. That’s a really enjoyable part of playing live for me, doing all of that. Gigs need to be more of a theatrical experience, especially with a couple of bods on stage twiddling knobs, which we are!”

Long-time fans can rest assured that their trademark headlamps will be making an appearance… but where do they get them from? “I’ve got to make some more torch glasses, actually,” recalls the tech guru. “I lost some at the last gig. They’re custom built for each gig, ’cause they come with nasty little lights that hardly last two minutes, so I have to cut out all the innards and put in Mag-lites.”

Mag-lites?! They must be heavy! “You have to have them strapped to your head,” reveals Phil, “or you’ll topple over after a few drinks! They come from the heady days of acid clubs and smoke and strobes and that sort of thing where you just need to see what you’re doing.”

Yes, but where do they get the original material? “We found them in Spaceage Gifts in Manhattan – one of those shops that sells mud and things like that. They double up as your eyes and work as a communications device,” he continues. “The audience think they can see where you’re looking, but in actual fact you’ve got your eyes shut and you’re thinking, ‘oh my god, there’re all these people out there!'”

So is he scared of his fans? “No,” he laughs, “’cause nobody knows what we look like – I have these blinding lights stuck to my face!”

Orbital’s fanbase has changed over the years to the point where Phil isn’t sure what kind of audience they’ll get at any given gig.

“At the last few gigs I didn’t know who would be turning up, but we find our fans do tend to stick with us once they’re in. But at those gigs there were loads of 18 year olds, which is great – but I was thinking they were eight years old when I started my career. Six, even! But our audience’s age range varies, really. We still do gigs early so the older ones can get to bed by 12…”

He advises new fans should check out ‘The Brown Album’ if they’re looking for an easy road into Orbital’s music, oddly ignoring the opportunity to plug the forthcoming retrospective album. “‘The Brown Album’ is a good favourite and has continuity,” he says. “I’d recommend they listened to that. Or they should buy the back catalogue. Or get their dads to buy it all for them!”

Playing live involves more preparation than audiences might think. “We have to convert all of our songs so we can perform them live. We use basic sequencers live, but the stuff gets written on computer so it has to be condensed and made more basic. It’s a very boring process and it takes three weeks when you’re not really doing any music.”

As for the next album proper, “We decided to come up with a record first and then see who wants it, says Phil. “We could sign to someone now and then have them say when the record comes out, ‘oh, it’s not what we were expecting’, but we want to avoid all that. We want people to sign it for what it is and I’m sure they’d agree that’d be the best way to do it. We could just release it ourselves and get a distribution deal. All the live stuff is our own company anyway, so it’s really a formality.”

“We haven’t really lost much with not being with a record company anyway,” he continues. “It’s actually quite liberating.”

On Orbital’s last album, a special guest appeared. As radio stations are known to prefer tracks with vocals, one could be forgiven for wondering whether David Gray‘s participation meant A Big Marketing Opportunity.

“He’s my brother in law,” corrects Phil. “He’s a laugh, and it’s all very casual. It wasn’t done because it’d be good for marketing, it was just a laugh. But then he became David Gray writ large…” Unlike The Chemical Brothers, then, Orbital won’t be resorting to indie blokes for their future records.

“I decided we shouldn’t stay there much longer, with lightning ten feet away…”
– Phil Hartnoll

One thing Orbital do a great deal is sample. Some people are not convinced that sampling is any different to ripping off. “What we normally do is take a tiny snippet or a loop from something rather than a whole riff,” says Phil. “You’ll listen to something and a light will just go on and you’ll think ‘I like that’. Something will just stick out and you’ll think that’ll be a great sound source to synthesise and twist and turn. The sampler is a creative tool with a whole synthesised section to it. You can take a chord from a record with a guitar on it and twist it so much that it has nothing to do with the original. That’s a creative way of using a sampler.”

“Or,” he continues, somewhat mischieviously, “you can just take a huge chunk, like Fatboy Slim. I’m coming from a world of hip-hop, with three decks, where two are running at the same time and you’re creating a third thing. If you’re taking a big chunk, you have to ask, are you bringing anything to the party?”

The interview’s nearly over, and Phil is asked to describe his most memorable Orbital gig. “One of the most bizarre gigs we’ve ever played was up a big tower in Germany,” he begins. “We were asked to play on the top of this flume tower, on a metal platform. There were about 10 people and thunder and lightening and we did a track called ‘The Box’ as a Hammer house of horror version and it was so appropriate! All this lightning coming down… it was fantastic.”

“But then I came to my senses,” he continues, “and decided we shouldn’t stay there any longer on the top of a tower when I could see lightning ten feet away from me…! So I just scarpered, but my brother was so pissed he just stayed there and played like a madman! It was quite an experience.”

Audiences at Orbital’s forthcoming gigs shouldn’t expect the Hartnoll brothers to conjure appropriate weather systems, but Orbital can magic up a fine live experience. Even now, Phil Hartnoll will be building up his neck muscles to take the strain of those Mag-lites…