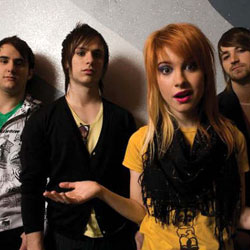 Headlining tours on either side of the pond, festival appearances in Germany, the US and the UK, and constant media frenzy at nearly every turn have seen the young foursome emerge as a band to watch in 2007. And with new record Riot! looming ever-larger on the horizon, the hysteria’s set to go only one way.

musicOMH caught up with vocalist Hayley Williams and drummer Zac Farro at Atlantic Records HQ in London to discuss the new album, festival fears, and a certain little magazine article…
To know Paramore is to love Paramore. Or so it’d seem. You certainly can’t hate them, they’re just too nice. In fact, it’s barely comprehendible that these kids have just got back from a 200-mile round journey to Birmingham, so full of life as they are.

Whether it be the gleaming tooth-filled smile that adorns vocalist Hayley Williams throughout, or the respectable honesty that fills their answers, there’s a foreboding sense that Paramore really love what they do.

Ask the band how they formed and you’ll doubtless hear something that resembles close to a meeting of the minds. “I fell in love with the idea of being able to write and create music with my friends,” explains 18-year old vocalist Hayley Williams. “I’d always liked the idea of being part of a band because I don’t like the idea of being by myself and all that stuff, so I was just praying for the day that they (Zac and Josh Farro, the band’s drummer/lead guitarist duo) would ask me to sing with them and write with them.” Eventually it happened, and the rest as they say, is history.

Enforcing her dedication to the word ‘band’ is something Williams is all too quick to do, and with the press all too quick to dub Paramore as nothing more than ‘The Hayley Williams Show’, who can blame her. “I enjoy being part of a band and doing what we do, but I don’t mind doing stuff by myself. Like I do interviews by myself and obviously there’s pictures, photo-shoots out there of me by myself, but I want people to see us as a band and hopefully they will.”

The follow-up to their 2005 debut All We Know Is Falling, upcoming sophomore album Riot!, set for release by Fueled By Ramen, is everything the band wanted it to be. Explains Zac: “I think our goal was to put more energy into this, to put more youth into this record, but at the same time to show how much we’ve grown, and to show what we can do if we spend time on a record.”

It’s a glowing testament firmly backed up by Williams, who explains emphatically her belief that this is the bands best yet. “I think our intention for the first record would have been for it to be everything that Riot! is, but there wasn’t any time to make that record back then. We weren’t the same people, the same musicians, the same writers that we are now, and we felt that now is the perfect time to come out with a record like Riot!. We’re ready for it and we feel confident about it.”

“I think our intention for the first record would have been for it to be everything that Riot! is…”
– Hayley Williams on why Riot! is Paramore’s defining release

With the record itself having already been released Stateside – as well as garnering a much unneeded leak to the internet – early fan opinions seem decidedly split on the bands latest offering. Explains Williams; “I for one would much rather people love and hate rather than just not care, so I’m pretty excited to hear both responses. I mean of course you want to hear all good feedback, but that’s just human nature.” “We knew a lot of kids would be stuck on the last record” enthuses Zac, “…but even some that said they hated the record have come back a week later saying they like it.”

Of late the band have been busy promoting the imminent release of Riot! to audiences on both sides of the Atlantic, culminating in a debut showing at last weekends Download Festival. Ear-to-ear grins grace the faces of both Williams and Farro when recounting their first Donington Park experience. “It was awesome”, explains Zac. “From the very first Download conversation we had we were like ‘sweet, Hayley’s gonna be carried off stage in a hospital bed’.”

He continues enthusiastically: “We talked about it all day, and then we got to the stage and the band that were playing before us (Porcupine Tree) were jamming heavy-metal, and we were like ‘woah, we’re about to go play some Pressure for you guys’.” Yet whilst the duo’s fears were far from realised, there remained the odd moment of crowd idiocy. Whilst Zac explains that there was “the odd bottle or two”, Hayley seems more intent on telling us all how to deal with such problems. “The bottles did almost hit us, but it’s ok ’cause I threw it back out at them”. If only we were all so brave.

“The bottles did almost hit us, but it’s ok ’cause I threw it back out at them…” – Hayley Williams, bottle-wielder extraordinaire

Away from promoting the album, issues have been slightly more contentious for the band though, with a certain mainstream UK music magazine running an article that did little to please neither the band nor their extremely close fan base. “If we wanna be a successful band and make music that tons of people can enjoy then it’s not all gonna be great you know”, explains Williams. “We’ve gotta take some hits along the way, and that was probably the first real hit that we’ve ever had.”

She shrugs it off in the manner of someone who’s been there and done it before, and of someone that knows they’re going to have to do it again. “The thing that was funniest was that pretty much all of our fans that read the article wrote complaints, and not one of them got printed. But oh well, the point was still made,” she says with a wry smile.

In fact, it’s only when you get close to the band that you begin to realise just how much their fans mean to them. “It’s so awesome [Williams, in reference to their fans rabid defence]. It just shows us like the fan base that we’ve built and that a lot of the work that we’ve done has just paid off. We wouldn’t trade our fans for the world, they’re just so cool and passionate.” Continues Zac, “They’re the craziest fans and they know so much about us.”

“We’ve gotta take some hits along the way, and that was probably the first real hit we’ve ever had…”
– Hayley Williams on feeling the nasty wrath of the press

As to whether Riot! signals Paramore’s breakthrough to the big leagues is something that’ll only be decided in time, but regardless of what happens, this is a band keeping their feet well and truly grounded. “Our job right now I think is to show people that we’re the same band, we’re just better,” emphasises Williams. “I feel like we’re much better than we were back then, and hopefully people will start to agree with us, and agree that Riot! is definitely a better record than All We Know Is Falling.”

“We just hope it does well,” muses Zac. “And even if it doesn’t, we’ve still got the fans that bought the last record and the fans that’ll buy this record.” So there you are then: Paramore expect. Get ordering.