Patrick Watson: “We want to plant a seed here that can grow” – Interview 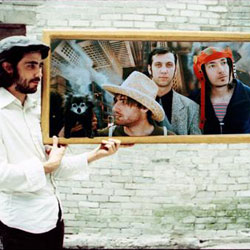 Montrealers Patrick Watson are more than the one man they’re named after. In Canada, their album Close To Paradise has been Polaris-nominated. The UK is about to hear why as it reaches these shores.

Ahead of that, musicOMH met up with their lead singer, sometime Cinematic Orchestra collaborator and the man who lends his name to the band for a natter about the band’s music, the Montreal “scene”, and how he came to record a single while drunk on vodka, and wearing a cowboy hat and boots…

While his band’s album is a musically-complex, serious affair, Patrick Watson comes across as a jolly, smiley, friendly fellow. Sporting an unkempt beard (as are his bandmates who come in and out of the room but don’t really get involved in the interview) he seems raring to talk. When asked to tell readers who may be unfamiliar with the band about who they are, he is keen to clarify how the band came about and how it ended up taking his name.

“So we as a band are called Patrick Watson. How it started was that originally, some years ago, we were asked to do some music to accompany a book of photography. Having built a CD to go with all these images we thought it would be fun to do it live and it worked really well and people freaked. We didn’t really think we were gonna be a band at that point but over a period of five or six years we got to a point where it became very difficult to change the name. It was difficult to find a name that suited us especially as we had such an eclectic music style. The second album was a kind of middle point, and now here we are at this third album which is much more song orientated.”

When it’s suggested that perhaps the two songs were chosen to showcase two different sides of the band, he agrees. “Luscious Life is I guess more of a pop song. It’s funny though – The Storm doesn’t really work in England when we play it live. We try to add a country feel to it – a bit of a Johnny Cash feel, and I don’t know if that really goes down that well over here. Yeah – I think that’s a weird choice. I would’ve released Luscious Life with maybe The Great Escape, or even a more simple song like Man Under The Sea. When we recorded The Storm we didn’t have a label and we kind of thought we should have a label and we should be touring. It was like a stormy road and I just knew there was a shit storm to come. It was a premonition that something was coming. When we recorded the second half of the song, as a joke I wore a cowboy hat and boots, and did it half-naked and super-hammered on vodka. I think someone drew a picture, but it got lost.”

As for the album and the current European tour, “well, the album’s not officially out here yet… (although is available to download) “but it’s been out in Canada for a while. The time seemed right now because we have such a good team behind us helping to put it out here. We’ve been playing Europe a lot and are building a buzz now. We want to plant a seed here that can grow…”

But his home country is where things have really taken off. “Canada has been hectic, especially in Quebec. We’d also like to develop a following in France and Belgium as we speak French. But really I just have simple expectations. I know we can play shows and we can sell records. I just don’t know how many.”

As one of so many critically acclaimed bands emerging from Canada at the moment, and in particular from Montreal, is there a scene and how does he feel about it?

“Well it’s not really a scene because no-one sounds alike and none of us really have that similarity. It’s more of a scene in that we all see each other and we’re all close friends. I guess I’m closest to The Besnard Lakes as we recorded the album with Jace (Lasek), their singer, but really everyone gets on well.”

When he talks about artists he’s been listening to, the names Sufjan Stevens, Beirut and American band Rachel’s come up. He’s also been listening to a lot of classical music as well as British acts The Beatles, Pink Floyd and Nick Drake and anyone who’s heard the album won’t find any of those influences surprising.

As for what’s next for the band “well, we still have lots of Europe to do. We’ve got to get our seeds planted over here and our feet on the ground. And we’ve started working on the next record. We’ll start doing some improv sessions and then we’ll start bringing in the new sound. The next record will sound different – very percussive. A little less layered but with a little more detail. A little bit more energy though. Maybe we’ll find a new band name for the next record. There must be something that conjures our sound. I would have liked it to be called Cinematic Orchestra. I thought that was a great name for a band, but they stole it.”

“It’s also important that people know we’re not a singer/songwriter project. That’s probably the furthest thing from it. The band doesn’t have that vibe. When people hear our title, that’s probably what they think we are, but we really aren’t. We’re all studied musicians and when we were younger we’d always see bands that played for five years and would never really play again. So we were always afraid of being a band because we want a musical career for the rest of our lives.”

Watson is a young, amiable musician and his band have made one of the most impressive albums of the year. Just remember that it’s definitely not the work of a singer/songwriter.