Patrick Wolf: “I’m a little bit more of a master and not so much a train wreck” – Interview 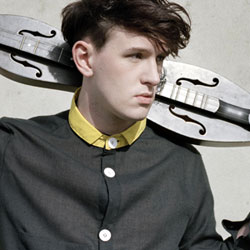 On this misty morning Patrick Wolf, complete in a very suave looking purple suit, has a noticeable spring in his step. His eagerness to talk about Lupercalia, his fifth record, is striking, and he comes across as a completely different person to the one portrayed in tabloid tales around the release of The Magic Position in 2007, where he was, as he admits himself, ‘a wreck’.

“I really hope that I have worked out things like treating my voice correctly, warming up,” he says. “When I first started the last thing I thought about was warming up but about coming out of the show alive. I’ve really had to look after myself and look after my energy. At 27 I like to think I’m a little bit more of a master and not so much a train wreck.”

Since then he has unleashed all the angst and troubled feelings on The Bachelor, an epic and, at points, unashamedly over-the-top LP. This new release is certainly not a direct continuation; more concise, very clean and incredibly upbeat with a totally different selection of sounds. It’s out with the loud guitars and in with harps and other tender instrumentation, as showcased on songs like Bermondsey Street and Slow Motion.

“An album ago I would have done that melody on the harp on… a harpsichord maybe,” he says of the latter. “The last record was really heavy on guitar and was very noisy. This is about love, intimacy and romance, and I grew up playing the harp as well. I’ve tried electric bass lines for the first time, which I hadn’t before. Also in the ballads, rather than doing a time signature of 6/8, I wanted to work in 3/4, so that they are kind of waltzes.”

“I looked into the sadness of troubled times with The Bachelor… this one is very much not wanting to sink the Titanic, you know?” – Patrick Wolf on the sense of ‘anti recession’ evident in the writing of Lupercalia

One of the standouts on the record is Together, which also dates as one of the oldest songs and is, as it turns out, a favourite of its creator. Recorded in Berlin with old collaborator Alec Empire during sessions for The Bachelor, it didn’t fit with the angst and melodrama. “I immediately knew that I didn’t want to put it on The Bachelor, I didn’t want anything to do with that album and I wanted to start a new album around it, but I had a lot of pressure at the time like ‘Patrick, you’ve got to put that on the album.’ and I think I had to state that this was the first seed of the new album.”

Incredibly uplifting and optimistic, Lupercalia goes against the current tide. In this political and social climate of cuts, protests, anger, war and uprisings it would seem perfectly normal to expect a more melancholic, angry or fiery musical landscape. The fact that Wolf’s fifth album isn’t any of these almost makes it ‘anti recession’. Presented with this theory, he offers a very diplomatic and considered response.

“I looked into the sadness of troubled times with The Bachelor and related what was going on in the world, and how a lot of my friends were losing their homes and had stalled careers because they couldn’t get any jobs. This one is very much not wanting to sink the Titanic, you know? I make my own boat to survive and to enjoy life and not to sink and be miserable. It’s not ignoring the current economic downturn and cultural recession, it’s about maybe trying to find the thing that does get you through it and, for me, that’s love and optimism. In a way it’s quite rebellious, this album, I think, but in a different way than putting on leather boots and screaming and shouting at the audience like I did for a long time.”

Once again there are many guests – Sky Larkin‘s Katie Harkin (“with Katie, I’d just met her in the car park of the studio I was working in and she had a big red bus and I had a big red bicycle and we started talking”), Thomas White, harpist Serafina Steer and even his sister. Wolf has firmly decided to move away from the thing that brought him attention in the first place with 2003’s Lycanthropy, his debut. “I’d wanted to move away from folk music and instrumentation. I think most people would agree there’s not much folk to the record, and I was quite certain on focusing not on that because I think I’d be repeating myself.

This comes in part from his own self governance. “I leave a lot to chance and that’s one of the great things about being a solo artist – you have no rules. My record label gave me no rules for this album and they just said ‘Patrick, you’re on album five, do what you want’. So that’s one of my favourite things about being solo, because I really can say ‘I’m going to do an album of…one tuba and a beat box! That’ll be my next album”. He laughs. “So I can be as exploratory or as conservative as I want to be, and it’s great”.

“It’s more important that I’m communicating as a songwriter and that’s what this album is to me. I couldn’t give a shit about the image to tell the truth!” – Patrick Wolf on his renewed musical focus

Unlike his last effort, where he experimented with a now deceased fan-funded service called Bandstocks, Lupercalia is released under his own label, Hideout. When asked about his reflections on the experience, he has both positive and negative memories. “I spent a lot of energy in the creative aspect – being there 100% for the photography, the artwork, the production, the songs, everything – and I was doing the label as well with my two managers. That all took one and a half to two years, and I think it showed in my live performances that I was very tired and” – he tails off briefly – “it was just a lot of plates to spin and that’s the thing. You’re going to start dropping plates and start going a bit mental.”

“I think it’s a wonderful model, and that it will become easier to do. Because Bandstocks was in its infancy, the founding of it and the closeness I developed with my audience was amazing, and I’ll take it to my grave with me because The Bachelor would never have been made without that. Anything that makes an artist more self-sufficient and gives them the power to increase the control of their work is always a good thing”.

A recurring theme in our conversation is style. The singer-songwriter has, in the past, been known as much for his flamboyant look and presentation as he is for his music. This is something that he is very keen to move away from, instead letting his artistic work do the talking. “With the publicity for The Magic Position it was about acid and colours and fairgrounds, and it was very playful. Before that was Wind In The Wires,” his second album, “where I spent three years touring with just a stripped down sound and a drummer and it was very much about the music. No image, no show, just about music. Sometimes you have the right to, as a musician, say ‘fuck image, I don’t really care about it’. It’s more important that I’m communicating as a songwriter and that’s what this album is to me. I couldn’t give a shit about the image to tell the truth!”

As our time runs out he confirms plans for summer festivals and more UK shows in the autumn, alongside his upcoming jaunt in March. Whether you believe him or not when he says he doesn’t care about image, you can’t deny that this will be his best chance to date to put all of that behind me and make people listen. It’s a new battle in his career, one he is determined to win.

Patrick Wolf’s fifth studio album Lupercalia is due for release through Hideout on 30th May 2011. The single The City is out now. His UK tour begins in Oran Mor in Glasgow on 23rd March, running through to the 29th at London’s KOKO. Further details can be found at his website.