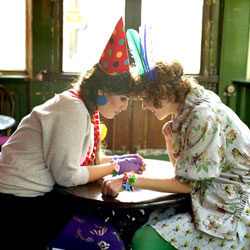 But the confusion doesn’t end there – they’re relentless giggers and have supported everyone from The Maccabees to Archie Bronson Outfit and Kate Nash to Mumford And Sons, yet couldn’t be lumped in with any of them. Neither do they sound anything like Buddy Holly.

“I think we’re where we want to be now!” laughs half of the band’s vocal duo, Rosa Slade. They’ve been toiling away for some five years, but in the last 12 months things seem to be finally falling into place, thanks in no small part to the arrival of drummer Olly Joyce. “Olly’s been with us for about 18 months now. He’s changed things massively. Before, we were so desperate to get drums in our sound that we’d set them up on stage and play them ourselves. It just felt like the next step musically – it’s totally changed our sound, progressed it. Also, it’s nice to have a third person around, you know? I’ve known Katy for years, and when you spend so much time with someone it’s just good to have someone else around. And, of course, being a drummer he’s got different musical influences.”

Their debut album, Fossils And Other Phantoms, is just out. Fans of their previous singles and EPs will notice the progression to a stronger, more sincere sound. They sound self-assured and ready for the fight with a lurch into a murky, brooding yet kooky take on Americana. The jingly-jangly DIY feel of their earlier efforts is banished and a new, epic Peggy Sue has been born. Rosa and Katy’s vocal duel sees them grasp their way through a darker world than they’ve explored before.

“It’s really exciting – the feedback from Wichita is that it’s going really well,” says Slade. “We were quite nervous about it because before, with the EPs, we sort of worked really quickly and intensely, but when you’re recording an album, it obviously takes longer. But we were conscious that we wanted to put out some current, new songs that represent where we’re at now. All the EPs definitely felt like we’d put a lot of work into them, but it’s a completely different experience to making an album. The EPs often had themes – the album doesn’t, but it feels more cohesive.”

Previously they’d relied on a little help from some friends. “We’ve always been pulling in favours,” says Slade. “The first (track) was recorded in a bedroom, and another was in our friend Ben’s barn in Devon. But this time, we decided to remove ourselves from everyday life. We spent three weeks working from 3pm to 4am in a studio in New York, working with incredible producers (Alex Newport and John Askew). We worked really, really hard. It was great though – we sub-let an apartment from Olive Juice, the anti-folk label. It came with a cat and it was just incredible, being associated with all this music we’ve loved. We’ve said that next time we want to record in a house in France – that’s our wish list!”

“I think we’re where we want to be now!”
– Peggy Sue’s Rosa Slade

Slade should be careful what she wishes for, because her dreams have a habit of coming true. Next month she plays at the Royal Albert Hall, a far cry from some of her earlier live experiences. “We did a tour on the Megabus once! I was supposed to be writing my dissertation but we thought ‘oh let’s go and do some gigs’, so we went off, just us and our guitars. It took forever! You rarely make money on tour, but it was so cheap we made loads on that one. It’s the way forward.”

Her favourite gig to date was supporting The Maccabees at Brixton Academy. “It was huge and it was a really big deal for them. I just hid behind a big hat for most of it.” They’re not a band you’d necessarily associate with The Maccabees. “I suppose not – we seem to play with all sorts of bands. I think we’ve always made an effort to not be pigeonholed – we want people to listen to our music because they like it. We’re not hip or anything. As a band we listen to so many different types of music it’s ridiculous, and I think that really comes across in the album. We listen to everything – old blues, Americana, folk, there’s some serious old r ‘n’ b history in there… and even rock and grunge. Narrowing it down to even 10 bands would be impossible.”

From Megabus to Brixton Academy and the Royal Albert Hall – it’s quite a step. “Well, downstairs at the Albert Hall!” she laughs. “But it’s the Albert Hall still, isn’t it. We can’t wait – it’s going to be really special.”

Peggy Sue play the Royal Albert Hall’s Elgar Room on 12 May 2010 and Brighton’s The Great Escape Festival on 14 May. Peggy Sue’s album Fossils And Other Phantoms is out now through Wichita.