Queens Of The Stone Age: “You can tell it’s creating emotion. That’s the way people used to record” – Interview 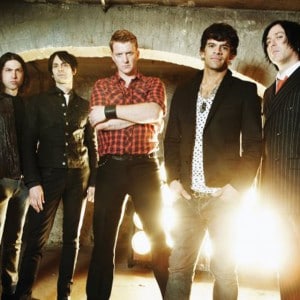 Queens Of The Stone Age

Another album, another band line-up change for Queens Of The Stone Age. The band’s revolving door brings Mark Lanegan back, but that nude bassist has departed – perhaps for a naturist beach.

Josh Homme has just been diagnosed with bronchitis. “I was awful last night,” he says of his performance of the previous evening in Paris. No, I assure him, we thought it was the smoke or the dry ice making him cough. He certainly seemed in top shape and, flanked by his fellow Queens Of The Stone Age, ruled the stage. The band performed old tracks, including some from their now-cult album Songs For The Deaf, as well as new ones from the just released Lullabies To Paralyze. Not quite lullabies, but their sheer energy does rip into the guts and paralyze us into awe – so this is how rock ‘n roll sounded like back in its heydays.

While Homme is sprawled in a leather armchair in the hotel library, just a day before flying back home to recover, Nick Oliveri replacement Dan Druff and occasional band member and former Screaming Trees frontman Mark Lanegan are having tea in the lobby.

Mark, having left QOTSA, surprised every rock journalist by recently rejoining the band on stage in Milan. “I just snuck back in,” he says. Even though his participation on Lullabies has been minimal, he’s here to stay. For now that is, until his next solo album. “It’s always been come and go.”

According to him, his part-time status in Queens was never a problem for the others, even though he had to announce his pseudo-departure. “I was just accompanying the band and I wanted to work on a solo record. And to do that, I had to publicly say at one point that I’m not going to do this or that, he says. This is my favourite band. I’m more of a fan than a member of it, like a mascot.”

Also joining the latest incarnation of the band is Dan Druff who replaces the frequently naked Nick Oliveri on bass. He is an old timer who Mark says “has been around longer than anybody, except Josh. He’s one of the most in-demand guitar techs in all of LA and very important to the sound.”

“I’m more of a fan than a member of it, like a mascot.” – Mark Lanegan on his place in QOTSA.

Turning to Dan, he continues, “You’re like a teacher in a way, a spiritual advisor in some others.” Yet for the former guitar tech, replacing Nick was not an easy job to accept. “I understand that Nick’s not here,” says Dan, “but someone needs to be. And I’m not trying to be Nick and I would never try to be him, ’cause he’s too awesome!”

The awesome Nick, who toured with Mark in December, was more than happy to help Dan, Mark says. “The first thing he did was offer to show him how to play the parts.”

So there are no hard feelings between Nick and Queens? Oliveri’s much-publicised, surprise departure provided much fodder for music magazines, and speculations still linger. But Dan assures us that no one acted like a drama queen of the stone age. These things just, well, happen.

“Josh and Nick have been playing music together for a long time. They’re both amazing musicians, both have strong personalities,” he says. “Sometimes, it doesn’t work. I don’t think it was the music that didn’t work. It was personalities, situations and all that. I’m friends with Nick, Josh is friends with Nick. People want to create some kind of drama that’s not there.”

“Josh Homme is such a superstar, you know?” – Shirley Manson on QOTSA’s main man.

Dramatic, however, could describe the sonic effects of Lullabies, Homme’s most ambitious album to date. It’s pure, unadulterated and sleazy rock’n’roll. Josh Homme is a sonic visionary who delivers bombastic rock, where venomous guitars spit their poison onto the world, often in the midst of the long sessions he so favours.

Someone’s In The Wolf and The Blood Is Love jam away, monster riff after riff. And if you’ve ever wondered what ‘music aesthetics’ meant, check this out. “On this record, pretty much everything was recorded live,” explains technical Dan. “It was people playing together in the same room. And when you listen to it, you can tell it’s creating emotion. That’s the way people used to record.”

The album also has some guest appearances. Dave Grohl isn’t pounding away on the drums this time, but Mark does lend a vocal or two, as does Billy Gibbons of ZZ Top on Burn The Witch, while Brody Dalle of The Distillers, also known as Josh’s girlfriend, teams up with Shirley Manson on the slinky You Got A Killer Scene.

And what did the Scots singer make of her time with QOTSA? “It’s hugely flattering that I was even asked to come in and sing on that record,” gushes Shirley. “But I don’t want to mislead anybody. You can hardly hear me on it. I really love the band. The new record’s fantastic – an insane guitar-driven record. Josh Homme is such a superstar, you know?”

Queens Of The Stone Age’s Lullabies To Paralyze is out now through. Tour dates and further information can be found here.