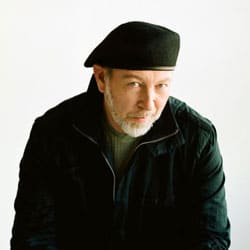 Richard Thompson is a man who refuses to slow down. He is that rare artist who reliably churns out an album every two years, whilst maintaining stringent quality control and pushing himself to move in new directions. In a career that now spans over 40 years, he has written more than 500 songs, an achievement for which he has just been awarded an OBE.

Although he returns to the UK regularly, the Fairport Convention founder has mainly resided in the United States for many years now. Does it feel different to be coming back to Britain with this new accolade? “Well it is an honour and I’m very grateful,” Thompson says, “but I’m very musically focused and it doesn’t change anything.” In fact, throughout our brief discussion, Thompson comes across as incredibly driven, with a burning passion for writing and performing musician that remains undiminished.

Thompson’s latest album, Dream Attic, his 13th under his own name (not including the duo albums with ex-wife Linda Thompson or the unrelated bassist Danny Thompson), is a prime example of his creative motivation. The album is a set of completely new songs recorded live in concert, the first time Thompson has attempted such a method of recording a new album in his long career. “I must have been losing my mind,” he says when pondering why he chose not to record these songs in the studio. “I’m always looking for ways to do things differently and people often tell me that whilst they like my albums, they prefer the sound of the band live. Things can be much more exciting live, and I wanted to capture that. It was a little experiment really – to see if we can capture the energy of the audience.” The comment about the audience is perhaps surprising, as the sound of the audience doesn’t really intrude on proceedings at all. “It was a conscious production choice to edit out as much of the sound of the audience as we could. The aim was really to capture the energy of a live performance without the listener necessarily being aware that it’s a ‘live album’.”

The songs for Dream Attic were written in an intense burst of creativity, with everything finished in just two months. Thompson is certainly a prolific artist, but is it usual for the process to be so effortless for him? “Well I do stare at the wall sometimes,” he admits, “but these songs came together incredibly quickly. I wasn’t initially intending to put them all on the album but in the end they all went on. The album covers a range of themes but there seemed to be an overlap in terms of tone and feel.”

“I have a lingering feeling of dissatisfaction – that I haven’t quite got there yet.”
– Richard Thompson

Thompson is right to suggest that the album is thematically varied, from the personal narratives of A Brother Slips Away and Crime Scene, to the character parody of Here Comes Geordie. One of the most striking songs, all the more so because it opens the album, is The Money Shuffle, seemingly an attack on the banking sector. Does Thompson share the sense of anger felt by many in the current climate? “Oh yes,” he affirms without hesitation. “The whole banking sector is kind of useless really. It’s grown disproportionately and has become a world of greed and corruption. It is sickening to see the kind of numbers that people get when there’s no real end product.”

Whilst Thompson has never shied away from a political angle in his songs (Dad’s Gonna Kill Me from Sweet Warrior dealt with the Iraq War and working conditions have long been a theme), he is perhaps not necessarily seen as a political songwriter. Does he see it as part of the role of an artist to comment on society? “Yes, absolutely. You should comment on social issues if you have the tools to do so. Popular music is grown-up these days, so it’s completely acceptable to do this.” The comment about popular music being grown-up is particularly interesting given Thompson’s extraordinarily broad definition of the term in his 100 Years of Popular Music show. “Well, of course, you can find political songs right the way through and popular music has often been an arena for that kind of comment. The 1930s was a particularly fertile time for this – there’s Brother, Can You Spare A Dime? which is an exceptional piece of social commentary. There was a period when music got blander, particularly in the 1940s, perhaps due to the war, when people wanted more escapist, sentimental themes.”

Perhaps more than for his politics specifically, Thompson is known for being a storyteller. His best songs (Beeswing, 1952 Vincent Black Lightning, The Poor Ditching Boy) tend to come in the form of sprawling narratives with vivid characters and life changing events. “A lot of songs are story songs really, but you’re not necessarily aware of it. There’s a more cinematic technique in a lot of pop music where a song just jumps to the middle of the action. Stories are really important in my songs and that’s really the influence of folk music and traditional music.” Out of all these stories, does Thompson have a particular favourite? “Perhaps today there’ll be a favourite and tomorrow it will be something different,” he says. “You’ve got to be slightly strange to listen to your own music. I know a few musicians who do and I don’t really think very much of their music. There’s something very ego driven about it. I might listen to see how I can make improvements for the next record but I certainly don’t listen for fun.”

Does Thompson feel that he continues to improve, in spite of the weight of all that he has already achieved? “I hope I will get better,” he says, with genuine humility. “I have a lingering feeling of dissatisfaction – that I haven’t quite got there yet. Music is an exploratory process for me. Just around the corner there will always be something different”. Perhaps this knowledge makes for a different Thompson from the teenager starting out in the mid-1960s. “I think I do feel differently about music now,” he agrees. “Some of the excitement has worn off. I do still feel some adrenaline on stage, but not in that 18-year old, nervous as hell way. I’m not saying that it feels like a job now, it’s nothing like that at all. It’s just that the relationship with the audience is deeper, and I’m now much more aware of that communication”.

There seems to be a great deal of mutual respect between Thompson and his audience, and he seems to have weathered the storms of the notoriously fickle music industry. “I think that’s something to do with not having massively successful records. That can put a tremendous amount of pressure on artists. Every five years there’s a new generation of audience, and it’s much better to build an audience slowly through live performance. That kind of audience is much more likely to stick with you.”

Recently, Thompson has been taking advantage of his loyal audience through some successful extra-curricular projects. He curated last year’s Meltdown Festival in London’s South Bank venues. “It was a lot of fun,” he says. It certainly showcased a wide range of music, some of which people might not readily associate with Thompson. “Actually, it wasn’t quite as broad as I would have liked. We wanted more world music particularly but various budgetary and practical reasons got in the way.” What were the highlights of the performers he did secure? “Well the Kate McGarrigle tribute was very special – people are still talking about that now. We had a night of classical string quartets that I just thought was absolutely unbelievable”. The festival featured a performance of Thompson’s theatre piece Cabaret of Souls. “That was good, but it was really just a read through. We really took it to another level recently on the West Coast of the US, where we performed it in full costume and make up. I’m hoping we can bring it back and do some runs in theatres. That would really be great. My stage crew all call it Cabinet of Stools, which is a delightful image.”

Richard Thompson comes across as very serious, not in a dour sense, but more in the absolute conviction and commitment he brings to every aspect of his work. A genuine passion for music and an unshakeable work ethic are both very much in evidence. Yet he used the word ‘fun’ more than once during the course of the interview. “Oh dear, you’re going to think I’m some sort of debauched lothario, aren’t you?” Really, nothing could be further from the truth.

Richard Thompson tours the UK in January and February 2011, beginning at Salford’s Lowry on 17th January. Further details can be found at his website.