Yes’s Rick Wakeman and Jon Anderson: “The best thing that ever happened to me was ear plugs” – Interview 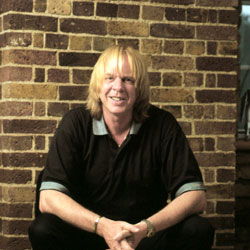 He’s halfway through a rehearsal for his acoustic tour with longtime, on-off musical partner and fellow sometime Yes member Jon Anderson, and is painstakingly copying music onto manuscript paper with a pencil.

Now and then mild admonishments spring forth, muttered along the lines of “Wakeman, you pillock”, followed by intense sessions of rubbing out.

“It’s the way we write,” he says, “I send him bits of music and he picks out the ones he likes, and sometimes I have to put them back together in a different order. It’s the best way to do it, and you’ll have to excuse me but if I don’t do it now, I’ll lose where I am.”

Several dominant 11th chords later, and he’s done, seemingly satisfied with his morning’s work. Anderson, meanwhile, sits out in the open studio, dreamy acoustic guitar riffs and snatches of vocal drifting through the control room monitors, taking him far away from a rainy Surrey afternoon.

Anderson’s health has not been good of late, with sinus problems confining him to hospital at times, but the eyes still sparkle and the mid-Atlantic twang talks enthusiastically of the material the pair are currently working on. “We started off by doing small acoustic sets in the middle of all the other stuff, and they became popular so we expanded them, sometimes even to an hour. This tour is an extension of that, with Rick just playing piano, and me on guitar. We’ve got four new songs plus all the other pieces.”

His keyboard cohort is particularly enthusiastic about the new arrangement. “I like revisiting, and sometimes it’s difficult to do that within a band format. There isn’t one piece we perform in the same way (“there’s a reggae version of Time And A Word”chimes in Jon), and everything has been revisited togive it a proper acoustic feel. There are moments of head explosion though, and there are some songs where verses have been cut, with some of them will reappearing unexpectedly…”

Warming to his task, Wakeman notes that “What’s pointless is doing acoustic versions of the song.”Anderson nods in agreement. “As a band that’s OK, we heard each other very well, but when you get on stage everyone’s on 11. Acoustic is good, with me and Rick going through the songs, it’s a lovely dance.” Rick takes over, the two duetting now as if in performance: “You’re not just rearranging, it’s like taking a book, which can become a stage play, a radio play. That’s what we’ve been doing with this.”

“If I had a choice, I’d just play piano, but it’s far more difficult than playing keyboards. It’s one of the ultimate forms of musical expression.” – Rick Wakeman

Whilst Wakeman made his name playing electric keyboards, his first love remains the piano. “If I had a choice, I’d just play piano, but it’s far more difficult than playing keyboards. It’s one of the ultimate forms of musical expression.”

Anderson’s challenge, meanwhile, has been to keep his instantly recognisable voice fresh. “I’ve just been lucky over the years, with not so much screaming. The best thing that ever happened to me was ear plugs, I don’t have to push the voice so much. I sing at home every day.”

Classical music continues to exert a strong influence on the pair. “As you grow older you tend to listen more to the structure of how things are created” says Jon. “I’m listening to the Rite Of Spring at the moment, it’s just amazing.” This is clearly something close to Wakeman’s heart – after all, he was groomed on classical piano. “All the Eastern European composers were absolutely amazing, what they were doing was clever, and in a lot of their music they would hide what they really thought. Tchaikovsky got a lot of his real feelings poured out in the music. Benjamin Britten’s another classic example, it was a way of releasing the inner self. I think there was a period from the turn of the century to the mid 1950s where there was this outpouring. We never had that – we had Harold Wilson!” “I guess our revolutionaries were The Beatles and Bob Dylan,” adds Anderson, the more thoughtful of the two today.

The talk turns towards the newer bands around, andWakeman takes up the baton. “I championed Muse six or seven years ago, when the first album appeared it was absolutely brilliant. I love Muse, Air, Tool, the Mars Volta too. To their credit you listen to a track and then you have to go outside and say ‘what the fuck is this?!’ My daughter went to see them and they basically did a jam for an hour! There’s so many different types of progressive rock, there always have been.” “It’s cross-pollenisation,” adds Anderson, “we always listened to Buffalo Springfield and were learning from Vanilla Fudge.”

Wakeman has a few concerns about the industry climate these bands find themselves in however, not to mention the plight of Yes artists and their contemporaries. “People didn’t expect there to be rockers in their 50s, 60s and 70s. Back in the ’70s there wasn’t any of that. Most record companies were run by music fans, and now it’s a lot more corporate – you can’t blame them for that though. The problem is the vice-presidents are 35 or so, they don’t know about us!”

“There’s two jobs I’d like actually, one is to be an MEP, the other would be to manage the seniors PGA within a record company.” – Rick Wakeman

Rick’s mind is on permanent overdrive. At the moment he has two ideas in his head. “In golf, people found that the players were no longer physically able to compete but were still very good, and so they created the seniors tour. I think there should be something like that in rock music. There’s two jobs I’d like actually, one is to be an MEP, the other would be to manage the seniors PGA within a record company. In 10, 20 years’ time there’s gonna be another batch of 50, 60-somethings. But the young musicians will always be evolving; they’ve started to realise now that they can make good business by giving their own stuff away.”

Rick, in demand as an after dinner speaker, can switch to anecdotes at the drop of a hat, and while draining an instant coffee recalls an amusing incident with Elton John. “We had this chat where he was saying to me, ‘I’ve always wanted to write a piece of music that’s really substantial, like a big piece, and I thought I’d cracked it – and it clocked in at three and a half minutes.’ To which I responded, ‘Well I’ve always wanted to write something that’s a really good three minute pop song, and I thought I’d cracked it – but it was 11 minutes 10!'”

He reflects on his new found popularity as a grouch. “Sometimes because of Grumpy Old Men they just want me to go along and moan. But in reality I’m thoroughly boring now, I have six girls and two boys, both of whom are musical – Oscar’s a drummer. I’ve calmed down a lot over the years, but I am getting married for the fourth time early next year – I like the cake, you know.”

And now there are photos to be posed for and numbers to be rehearsed. As we part, the enduring image is of Anderson giving a cheery wave, while Wakeman gets expansive on the piano. The two seem blissfully happy with their lot – a musical married couple.

More on Rick Wakeman
Rick Wakeman: “If you’ve got good melodies you can do absolutely anything with them” – Interview
Yes’s Rick Wakeman and Jon Anderson: “The best thing that ever happened to me was ear plugs” – Interview