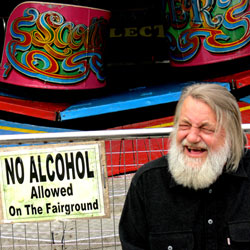 My musical love affair with Robert Wyatt began as a teenager when a friend lent me Soft Machine‘s albums Volume 1 and Volume 2. I was, and still am, entranced by their free form psychedelic jazz sounds and Robert Wyatt’s beautiful, soft and emotive vocal. My friend asked for the albums back many times, but I, in turns, couldn’t find them (they were on my record shelf!) had lent them out (no way, not ever!) and needed to tape them before returning them (well, I did need to, but had no intention of doing so – I had the records!).

In fact, to my shame, I invented just about any excuse to avoid giving them back. My friend always acquiesced, so I kept those albums for 10 happy years. But it wasn’t until I heard, and became engrossed in, Wyatt’s 1974 album Rock Bottom, that I found true musical nirvana and one of my all-time favourite albums.

So it was that we met at London’s Royal Festival Hall to chat about his new album Comicopera, I was thrilled. Wyatt looked as relaxed and was as charming as I felt nervous and clumsy. But when he suggested a sneaky cigarette, nerves dissipated. As we smoked we chatted, about his life in Lincolnshire, his nerves when performing, and about his London roots.

Wyatt comes from a musical family. “My father played piano, and even made a few records, so he was a musical chap. My big brother Mark also had a huge record collection of jazz of the ’50s, and I was completely blown away by them,” he recalls.

Wyatt’s early musical jazz leanings led him to form Soft Machine in 1966, a band in which he sang and played drums. Members included Hugh Hopper, Gong‘s Daevid Allen and Kevin Ayers. Together they made up the Canterbury set, Wyatt explains: “I went to school in Canterbury and there was a guy called Hugh Hopper. We cobbled a set that we could play and found ourselves playing at places where playing new stuff was welcome, places like Middle Earth and the Roundhouse. We realized that you could incorporate jazz and other stuff and put them through the beat group sausage machine and see what came out the other end.”

“I had to invent a new way of working. It was very good for me in hospital as it gave me something urgent to do when I came out.”
– Robert Wyatt on life-changing consequences of falling three storeys

Soft Machine made three hugely influential albums with Wyatt but, following an acrimonious split, Wyatt went onto to form Matching Mole. And then, in 1973, disaster struck. The story of how Wyatt broke his back in a drunken fall from a third-floor window at a party is well known. He’s been in a wheelchair ever since.

He released his seminal solo album Rock Bottom the year after. It’s a mesmerising and mournful soundtrack to pain and loss, written largely in hospital following the accident. “I realised when I was in hospital I wasn’t going to be in a group anymore, let alone play the drums. So I had to invent a new way of working. It was very good for me in hospital as it gave me something urgent to do when I came out.”

Rock Bottom is beauty incarnate. Some tracks are almost too painful to listen to. Little Red Riding Hood Hits The Road sounds like a scream into the ether. “The whole thing about the situation I was in was rather dreamlike,” recalls Wyatt. “How I get by is, everything turns into a dream for me. I’m dreaming all the time. They’re not logical or analytical but the emotional states will filter through. It was all written in a trance, all that record, I didn’t really know what I was writing, it just came out like that.”

Subsequent album Ruth Is Stranger Than Richard is growth explored, freer in its splintered jazz expression. And others, Dondestan, Shleep, and the Mercury nominated Cuckooland, have touching moments of supremacy. Wyatt’s songwriting is unique: “I have two ways of writing songs. One is the karaoke system! I play really nice records and when the record’s over I keep playing, and of course I can’t play the tune so I come up with something else, and that’s my tune. Another way is around trying to remember tunes and getting them wrong in your head. Little things nag away and I’m scared of forgetting them – I can’t write music. I work in a very distinctive way, it’s so buried in something I don’t have intellectual access to. It feels right and I just to do it.”

“How I get by is, everything turns into a dream for me. I’m dreaming all the time.”
– Robert Wyatt on the power of thought

Comicopera, Wyatt’s latest album, is a beautiful collection, as generous and kind as we’ve come to expect from him. The album is divided into three parts. He explains: “The first part, Lost In Noise, is about loss and relationships. The second, The Here And Now, is more objective, about things I like, don’t like, don’t understand, like religion (“I really envy Christians, I envy Muslims too,” he says playfully in Be Serious) and do understand, like nice cosmopolitan music in a town square.” There’s a contrasting track named On The Town Square too.

For Wyatt however, the personal has long equated the political: “Side 3 is, you know what? I’m fed up with English speaking people. I’m going to go away with the fairies. I sing in Italian and I do a bit of surrealism, free improvisation, and end up with a romantic revolutionary song of the ’60s, a hymn to Ch Guevara. Just to say, that’s my generation, the kind of hope that kept us going. I’m not saying it worked or didn’t, but without these little dreams and hopes, I couldn’t survive.” It’s this portion of the album that contains the most surprises for Wyatt fans – all of them pleasant.

If Robert Wyatt inhabits dreams, hopes and, I suspect, fun and love, then we should be thankful. Those dreams and the music they inspire envelop and touch others deeply. As I leave my meeting with this charmingly chatty legend of his time, I’m smiling, deeply.