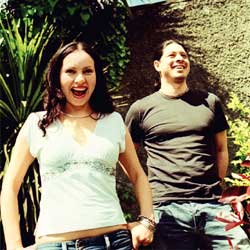 Making the transition from unknown Mexican metal band to winning over the European public with a unique brand of contemporary classical guitar work might seem a more than momentous task.

“Well the live album was released here (Ireland being their adopted home) in June and now it’s in 9th place in the charts, so it’s really amazing to see that, you know? It’s the first instrumental to ever do that so yeah, that’s pretty cool!”

No doubt a unique selling point for Rodrigo and Gabriela is the fact that they weren’t created by anyone other than themselves. This stems from a very colourful musical background, which starts when Rodrigo was a mere youngster:

“When I was growing up, my older brother was a real influence on me so whatever he was listening to, I was listening to. He was into glam rock at first, like Motley Crue, Skid Row and all that, but then he discovered Metallica and he was like “Woah, this is the shit!” (utters a reminiscent laugh!) So when he brought home Kill ‘Em All, everything changed! I’m glad that he guided me like that because still today most of the CDs on my shelf are Metal too and I still really love that music.”

“When my brother brought home Kill ‘Em All, everything changed.” – Rodrigo on the musical education bestowed on him by James Hetfield and company.

So Mr Hetfield and co gained another loyal follower way back in the 80’s, but were they also responsible for Rodrigo picking up his first guitar?

“Well yeah, after we heard Metallica we started playing together and when we were older teenagers we hooked up with a drummer and the metal band formed. We released our first album in 1991 and then Gabriela joined in ’94 to replace one of the guitarists.”

“The band went well, and lasted 8 years, and although Mexico has a huge metal scene, it is mainly for the well known bands like Megadeth, Metallica etc rather than for the native bands, so for us it was very hard you know? We just got very tired and in ’98 we gave up because the band wasn’t really going anywhere.”

Having given it a better shot than most, plenty of musicians would’ve forsaken their dreams of ‘making it’ at this point and laid down their six strings in preparation for the 9-5 rat race. Thankfully, two young dreamers stuck at their vision

“Mexico has a huge metal scene, but mainly for the more well-known bands” – Rodrigo explains why his band’s first incarnation didn’t do too well.

“After the band broke up, Gabriela and me were busking and playing cover versions in hotels and restaurants but we quickly got really tired of that bossanova shit, so we started to compose and the mix we have now just came out naturally.”

Natural it certainly is. As anyone who has been seen the delightful concoction that these two deliver will attest to, their live shows are truly unique, amazing experiences, where Metal covers are interspersed with original material which features the percussive use of the guitar body, electric finger work, and a barrage of relentless melodies. Unfortunately, this is not something the pair managed to capture authentically on their first British release Re-Foc.

“Yeah, the energy was something that we lacked from the first album. It was completely different in the studio, we really didn’t get it quite right, but with the new album we wanted to do something closer to how we are live, you know? I think it really captures more of that, and the whole idea of what we are.”

With hugely popular musical tributes to both Dave Mustaine and Metallica already present in the couple’s back catalogue, it seems a natural progression that they are set to release an EP consisting solely of Metallica medleys:

“We lacked the energy in the studio that we had on stage”
– Rodrigo on why the first Rodrigo Y Gabriela was seen as a disappointment.

“We are really excited about this project, the songs are in pre production now, and the idea is to do it with the percussive elements of the guitar that we use already. Gabriela is working a lot on Lars’parts you know, so that’s pretty tricky to find what sounds better on songs like Battery.”

But wait sir, If there’s one thing Metallica are more famous than their music for, it’s for protecting their music on an anally retentive scale. Are the Godfathers of modern metal cool with this ‘unplugged’ release?

“Ha, ha, well you know, our company talked to theirs, and as long as they get the money they’re owed from royalties they’ll be happy! Anyways, we are still small, so even if it sells 5 or 10,000, I’m sure they won’t be too worried, they’ll still be making money!”

With cover material already featuring heavily in their live performances, and not one but two versions of Metallica’s epic opus One on their latest release, it seems the pair are seeking to display some of the true technical musicianship common to many metal artists, albeit at a slightly lower volume:

“Absolutely! Ha, yeah that’s the whole idea, ‘cos when some young kid wearing a Metallica shirt and looking scary, sometimes they take their parents along to a concert and they are surprised and go; ‘Oh, I never knew Metallica would sound like THIS!’. A lot of people have stereotypes about Metal music you know, so that’s what were trying to do, after all I started playing guitar because of heavy metal so it’s what I want to do.

So dear reader, if you still think that metal contains about as much art as the Tate Modern, you might want to let these two bend your ear (and your preconceptions!).