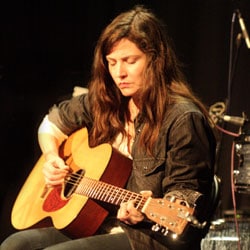 Sarabeth Tucek is seemingly most well known on these shores for having appeared in Dig!, the movie about the rivalry between Dandy Warhols and Brian Jonestown Massacre. There’s also the little matter of a Bob Dylan support slot. Following the release of her second album, the amazing Get Well Soon, earlier in 2011, it’s surely only a matter of time until she becomes well known on her own terms rather than by associations with his Bobness or the wacky world of Anton Newcombe.

We meet Sarabeth in Bath on the penultimate date of her current UK tour. Tucked away in the Chapel Arts Centre, despite the name it’s not quite the church that Sarabeth envisaged. “Originally I wanted to do all churches on this tour, and then we only got two set up. Suddenly it became bars. Last tour we played at Union Chapel in London and it was so” her demeanour suggests that the word she’s looking for is beautiful. “For what I do when you don’t have a band and you’re playing acoustic there’s nothing better than those old churches, the acoustics are amazing, because it’s so hollow and spacious. So I wanted to the whole tour in churches.”

There’s no altar wine here, just a few Pepsis and boxes of lager stewn on a table in the green room a store room next to the venue’s conveniences. Various members of the other bands on the bill tonight stroll in to pick at the boxes throughout the interview. “I can’t drink any of those things before I perform,” Sarabeth says, smiling.

Churches might well offer better acoustics, but considering the subject matter of Get Well Soon, a more appropriate venue is hard to envisage. Her second album was written, for the most part, as a reaction to the death of her father and at times takes on the form of a eulogy. Writing about such an emotive subject must have been difficult, and making a decision to write about a loved one’s death cant have been taken lightly.

“I think that when I write, it’s about problem solving for me. Things that I can’t seem to wrap my mind around or reckon with, that kind of bother me year after year after year – that was sort of an issue I felt was an elephant in the room. I was writing about all kinds of things but that was the main issue around which all other issues orbited. So a friend of mine said ‘Why don’t you write about that, you write about other parts of your life?’ So I kind of wrote one song (The Doctor) and I thought, ‘This seems right’. Also, I didn’t really have a chance to say goodbye to my father because he died very suddenly, so I felt that it would be a really nice thing to do for myself and also for him. To memorialise him a little bit. But I didn’t want it to be a daddy album.”

Sarabeth needn’t have worried; Get Well Soon, is not a daddy album, but it is rumination on a common experience, and the details make it seem incredibly personal. “It is personal, but it’s not literal. I just wanted to make something from that experience,” she says. At times it can be a hard album to listen to because the subject matter feels so emotionally raw. Is it posslble to consider the album a little voyeuristic at times? “I don’t know where that comes from. It’s not out of my diary. Art, if you do it the way I think you’re supposed to do it, shouldnt be like that. I guess everyone has a different reason for writing.” So it shouldn’t be voyeuristic? Sarabeth laughs, “Well not unless it was someone talking about a sexual experience…”

Sarabeth has been touring the UK for sometime now, back in May she was here for a month, and this latest jaunt has taken the best part of three weeks and will conclude in Barnstaple the day after this interview facilitating a cab ride at 3am from the west country to Heathrow in order to catch the flight back to the US. Clearly touring is tiring at the best of times, but surely especially so when you’re inhabiting songs as emotionally involved as these. “I’ve had some other people ask me that question, and I’ve said no. But the truth is that now I’m getting to the end of the tour, I have less and less emotional steam. I realise that it is draining. There are a couple of songs that do take me in, where everything else disappears. It can be difficult, but for me performing is always difficult regardless of the material. It’s just hard to be in front of people.”

Of course, those people are for the most part there to see Sarabeth and hear these amazing songs. Apart from being emotionally resonant, Get Well Soon is beautifully written and performed. When she plays tonight, the perfection of her voice and performance is stunning. However, there are always occasional audience members on hand to drive her to distraction. “Did you see that girl shoving her feet in her friend’s face?” she asks later. If the audiences are sometimes too ignorant to pay attention, then that’s their loss. “I’ve played some gigs where people are giggling when I’m playing these songs it’s so frustrating. It’s not like punk gigs where if you hear people talking you can just go up to them and tell them to FUCK OFF!”

Idiot audience members aside, Get Well Soon has made a strong impression on those who’ve heard it, understood it and perhaps found solace in it. Clearly it was a way to deal with issues on a personal level, but was it ever intended to be heard and affect a wider audience? “I think people have had maybe a deeper connection with it. I think a lot of people have talked to me about experiences and their loss. There was one woman who wrote to me and told me her husband had passed away. She had an experience where shortly after he passed away, some gardeners came and were cutting down some trees out back and she said she felt like it was physically hurting her. She couldn’t stand for them to do that. So she went out there and asked them to stop. And I thought that was an amazing story.”

“The other day I was listening to Queens Of The Stone Age and I thought I just want to do really heavy stoner rock.”
– Sarabeth Tucek

This episode (or one quite like it) is elegantly spoken about in the title track of the album; it’s also the song that offers the most explicit call of hope and a sense of shared experience. “I think that in grief you can feel isolated. I know when my father passed away; I didn’t have any friends who’d lost a parent yet, so I felt very isolated in my experience. And even though my friends were trying to be supportive, I could sense that they felt awkward and they didn’t really know how to deal with it, or talk to me about it. So I think that this has naturally opened up a dialogue that now I can share an experience with somebody who went same through the same thing that I did, which is very healing. I think that’s the best thing about art. You can find yourself in someone else’s experience, something that they’ve created from an experience, and some part of you can feel joined and not so alone.”

So with the tour coming to an end, and a return to the States beckoning, where does Sarabeth go next? It’ll be hard to follow an album like Get Well Soon, its emotional impact and beautiful songs could well be a defining moment. “I think I want to do something that’s less guitar driven,” she says. “I think I might try to do some stuff that kind of experiments, soundscapes… I don’t know. I’m not quite sure yet, I kind of go back and forth between a couple of ideas. The other day I was listening to Queens Of The Stone Age and I thought I just want to do really heavy stoner rock.” That would be quite a step away from what’s she done before, although it would certainly be interesting to see Sarabeth pounding away on a drop-C tuned guitar, creating vast expanses of desert tinged drones. “There’s just so many different sounds. Maybe it’s because I’m in a perpetual identity crisis,” she laughs, “but I’m always disgruntled by how I’m described because I never want to be put in one genre. I listen to lots of different types of music, and I always get put in with Folk and I don’t really have much of an affinity for it. I mean I like Woody Guthrie and stuff, I like old blues, but I don’t get put in that category. I get put the folkie lady category. I don’t think I’m a folk lady.”

The folk genre definition is always a danger for anyone who straps on an acoustic guitar, isn’t it? “I think they can’t help but put women in the folk category at different times they just can’t resist. You have to be labelled ‘folk’, and at some point you have to be compared to Cat Power. I mean, I like Cat Power… I read reviews of people that sound nothing like her and they’ll still just say it. I think, ‘Did you listen to that really?'”

For what it’s worth, Sarabeth Tucek doesn’t sound like Cat Power. She doesn’t even sound like a folk artist at the gig tonight, just someone who happens to be using an acoustic guitar as instrumentation. Then there are those songs. The Fireman is jaw dropping, and Get Well Soon is utterly heartbreaking but optimistic too. Her voice is also phenomenal, hardly showing any signs of having been subjected to touring and performing for the last three weeks. What is clear tonight is that with Get Well Soon, Sarabeth Tucek has found her own voice, and it doesn’t sound like anyone else. Art the way Sarabeth Tucek thinks art should be done is a successful approach. And we’re looking forward to that stoner rock band.

Sarabeth Tucek’s album Get Well Soon is out now through Sonic Cathedral. A special edition double CD version was released on 12th September 2011, featuring the In My Room Demos.