Sarah Nixey: “I wanted to play around with the idea that I’d be singing on this record, rather than whispering” – Interview 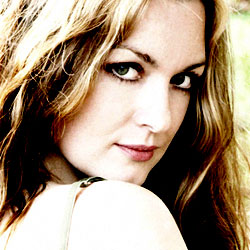 Top of the Pops has, down the years, produced many a memorable sight. Nirvana‘s Kurt Cobain blatantly miming Smells Like Teen Spirit; All About Eve‘s technical difficulties; Chaka Khan‘s big black bird costume.

Right up there with them was the incongruous manifestation, in 2000, of misanthropic Auteurs lynchpin Luke Haines, a serial nearly-hit wonder, and sometime Jesus & Mary Chain member and absinthe importer John Moore, in the Top 20 as Black Box Recorder with a little ditty about the birds and the bees called The Facts Of Life. On vocals, whispering about pubescent boys and girls in relationship dramas was a quintessential English waif – Sarah Nixey.

That was the dawn of a new millennium. Half a decade later, Nixey is emerging from the creative chrysalis of Black Box Recorder as a fully fledged solo artist. It’s been a while. What’s she been up to?

To discover this I meet Sarah in the salubrious surrounds of The Kilburn pub, prior to her first solo London show, upstairs at the Luminaire. My new fangled digital recording device picks up the sound of people drinking, talking and scraping chairs about, but doesn’t pick up my questions at all. Yet through all the racket, Sarah’s distinctive, cut-glass tones are precise and recorded in their entirety.

“I had all these messages on my website asking where I’d been, saying that I’d not been around for ages, saying I’d been a real dark horse – which I quite like,” offers Sarah. “I’ve been hibernating.”

While in hibernation she’s been penning her own material. “The songs are very different to Black Box Recorder,” she enthuses. Joining her in hibernation was producer James Banbury, latterly keyboardist for Black Box Recorder and cellist with The Auteurs. For her solo material, Banbury’s role is well defined. “I write the songs and give them to James, and he fleshes them out.”

In her erstwhile ‘pop collective’ Haines and Moore were the writers. Sarah explains her playful approach to Black Box Recorder’s beginnings: “John seemed interesting, playing the saw… I knew he had a history with The Jesus & Mary Chain, and I found him quite appealing,” says the band’s self-styled Trojan horse. “Luke and John really hit it off, but it was a pure chance meeting that led to something happening between the three of us. They sent me a fax saying, sing a song for us, we’ve got a studio on hold for this weekend, it’s called Girl Singing In The Wreckage, it’s not as dark as it seems, and we’ll make you famous, they said. I thought it was really funny.”

“We kind of look like Abba. There are two guys and two girls and a glitterball above our heads.” – Sarah Nixey, in a moment of hilarity, describes her live stage act…

Their first album, England Made Me, was followed by The Facts Of Life within a couple of years. The title track made the top 20. “The intention behind The Facts Of Life was to have a hit single and they succeeded very well,” recalls Sarah. “I’m sure there were some people who bought that single and then bought the record and… weren’t really expecting that! Luke and John were enjoying every minute of it.”

By the release of the band’s fourth and last record, 2003’s Passionoia, Sarah had started to write her own songs. “When you’ve got two really good songwriters writing for you you become quite lazy,” says Sarah. And they really were writing about her. “They were writing for me and about me, about my life,” she explains. “I felt like the songs belonged to me. They had the writing credits but I was singing them. On some level I was the muse. I would share some anecdotes with them and then they’d come back, rather embarrassingly, hiding their faces, with a song. I quite liked that.”

Black Box Recorder isn’t officially dead – instead their state of being is described as “comatose”. “There hasn’t been an official split, but I can’t see anything happening in the near future,” says Sarah. “After Passionoia things fell apart with the record company. Luke was off doing solo stuff and John was off doing a solo record and I felt that it was probably the right time to do my own thing as well. I knew James (from Black Box Recorder) and we recorded an album together.”

I ask her about the sound of her new material. What do her songs sound like? It’s a question well able to dismay many an artist, but Sarah’s response is swift. “They are pop songs. My vocal style is similar (to her Black Box Recorder output), but stronger I think. I wanted to play around with the idea that I’d be singing on this record, rather than whispering on it. It needs to be sung.”

“I wanted to play around with the idea that I’d be singing on this record, rather than whispering on it.” – Sarah Nixey on her new solo material…

There’s soon to be a debut album to demonstrate why. “It is finished,” says Sarah. “I’ve just got to work out exactly what to put on it, where things are going to go.” And is she excited? A measured response: “The exciting stuff has already happened – the writing and the recording is the bit that I really enjoy,” she says. “Now comes all the promotional stuff… but doing gigs is great, I love doing the live shows.”

She has a particular soft spot for the Luminaire, the north London venue opened in March 2005 that would, within 12 months, go on to be named Time Out Venue of the Year. “I really love this venue. I live around here – the sound is fantastic, and I can walk home! It’s becoming something because of the man who’s managing it. Andy Inglis has been working all hours getting it a good name, and now it has a good name, known for having the best sound in London as well.”

I ponder what her audience at the Luminaire should expect of her live act. “There are poppy moments, my disco anthem…” she says. “We kind of look like Abba! There are two guys and two girls and a glitterball above our heads.”

Black Box Recorder’s lyrical safe/horror juxtaposition, defining sometimes unpalatable aspects of Englishness yet always from an affectionate point of view, defined their songs. Do Sarah’s lyrics on her new material continue in a similar vein? “The subject matter is whatever I’m reading, whatever I’m watching on TV, mixed with autobiographical details,” she says. “I can never go away from English life. It’s where I live and I am very English.”

Her first (download only) single, The Collector, is about a boy who collects butterflies and then goes on to collect women. It was inspired by the novel of the same name by John Fowles, naturally enough a writer from the south-east of England. In the book an uneducated and withdrawn man collects butterflies before imprisoning an art student in his cellar as part of his collection. Sarah has a visual reminder of the book. “There’s a painting I have in my living room, of a boy holding a scalpel to a butterfly.” But hang on – didn’t she say she was making pop music? “It’s a fairly upbeat track, quite pop actually!” she insists, before dissolving into laughter.

“I’d like to do something quite fast, orchestral even.”
– Sarah Nixey’s musical future could head in any number of artistic directions…

I ask her which instruments she plays on her solo record. “I sing,” comes the response. “I play guitar really badly, which is how I write my songs, but I wouldn’t inflict that on anyone. I can just about string some chords together… I’m learning piano at the moment, but I like to go on stage and sing rather than strap a guitar on.”

As to musical influences, she’s happy to namedrop David Sylvian, front man of Japan, whose new project Nine Horses Sarah tells me she read about on musicOMH. She’d covered the Japan track Ghosts for Infantjoy‘s new record. James Banbury (him again) and talking head and music writer Paul Morley, the brains behind Infantjoy, are also behind the “boutique label” Service AV that put out The Collector digitally. “I love that track – it’s really the only Japan track I remember. They were a funny band,” she muses.

But when it comes to her music, Sarah Nixey is in charge. “There are no deadlines, which is quite liberating,” she tells me. “I’m not even being managed. It’s incredibly empowering and actually quite addictive.” And with her first album laid down, what might the future hold for her? “I’d like to do something quite fast, orchestral even,” he says. “Banbury can sort anything out. He’s an incredibly accomplished musician, produces, programs, is musical director.”

Her gig that evening consisted of a half hour set of glacial, almost pop music, with an edge to it. The Collector and Masquerade were amongst the memorable moments. Curiously, the stage was decked out with vertical flourescent tubes – reassuringly, her stage act for her first London gig resembled Abba not a jot. But a sense of a milestone passed in Sarah Nixey’s quest for artistic fulfilment was palpable.

More on Sarah Nixey
Sarah Nixey – Brave Tin Soldiers
Sarah Nixey – Sing, Memory
Sarah Nixey: “I wanted to play around with the idea that I’d be singing on this record, rather than whispering” – Interview