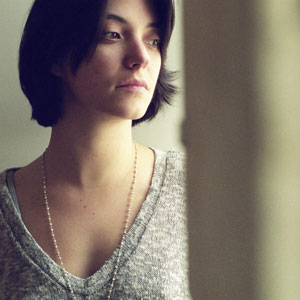 Enigmatic singer, songwriter and guitarist Sharon Van Etten was somewhere deep in the heart of Texas nearing the end of her American tour when she answered the phone. Since releasing her third album Tramp in February, with its cover art homage to John Cale, the 31-year-old has been out on the road with her band, missing Hurricane Sandy and feeling a bit guilty about not being on the East Coast with her family and her boyfriend.

She lives near Coney Island and clearly enjoys a good giggle. Which makes her keen to set the record straight on not being a “crazy, dark and depressed” person after many of her lyrics on Tramp detailed an abusive relationship, as she sings on Give Out: I loosen my grip from my palm and put it on your knee/ In my way, I say youre the reason why Ill move to the city/ Youre why Ill need to leave.

Ahead of her London date at the Shepherd’s Bush Empire, she declares herself to be a “goofball” and says working with Aaron Dressner of The National has helped her to become a better musician…

musicOMH: Youve been playing songs from your latest album Tramp on tour this year. Whats it like playing those, often quite personal, songs all over the world?
Sharon Van Etten: I have to say, its pretty surreal. Im still pinching myself. Its really hard to believe Ive got this far, you know? I mean, it feels like yesterday that I was living in my parents basement and recording songs on the internal mic of my laptop. I cant believe it. I feel really lucky that Im doing all this. I have an amazing band and we sound better than weve ever sounded. Weve been touring almost non-stop and while were looking forward to it coming to a close [she says with an exhausted giggle]; were really excited to have our Shepherds Bush gig be the last date for the year. Were really honoured that we get to play the Empire.

OMH: Those songs you recorded in your parents basement, were any included on Tramp?
SVE: Most of the songs from that time made it onto the first record, Because I Was In Love. But because of my parents encouragement and the fact they gave me a laptop to make the recordings I was able to move on from the old Texas Instruments tape recorder I was using. They were the first people who gave me something to help me record. And I used that same computer to record the demo versions of the Tramp songs.

OMH: After you released Tramp, were you bored to death with the questions about being depressed or being too introspective? Where you getting a reputation?
SVE: [Giggles] Yeah, I can tell people that if I didnt write the songs on Tramp I would probably have turned out that way. But singing those songs expelled those feelings from me. Tramp was my catharsis.

OMH: With the success of Tramp, you jumped from basement recordings to being in the limelight. Does that help your confidence when it comes to writing new songs or returning to the studio?
SVE: I cant wait to have a break and be able to write again. Right now, the tour is just a day-to-day struggle to keep the songs new for every show. But the support that Ive gotten on this record has given me the courage to try new things on the next record. Im really proud of Tramp and it was fun to collaborate with Aaron [Dressner of The National] and its made me want to work with more people. And also its made me want to try and write as a band for the next record. Thats something Ive never done before. Im just ready to try new stuff!

OMH: Do you come from a musical family?
SVE: My parents are huge fans of music and arts. My mom kinda played guitar. They have always encouraged me to take lessons, they always took me to concerts and the radio was always on in our house. My dad still has all of his records and we used to listen to music constantly in the house.

“The support that Ive gotten on this record has given me the courage to try new things on the next record.” – Sharon Van Etten

OMH: Any of those old records make an impression on you?
SVE: My dad is a big Kinks fan and a Neil Young fan. My mom is really into Joan Baez, Joni Mitchell and Carly Simon. So my dad was really into rock n roll and my mom was into folk and the oldies like doo wop. So I feel that Im a combination of both! They were both major influences on my tastes growing up.

OMH: Has the process of going on tour for the first time and choosing songs to play and getting more and more polished as a live band as you gain experience helped the way you will write and play in the future?
SVE: Definitely. I can still remember our first show when we were running through the songs for the first time we were all really nervous! Just being relaxed and playing helps you feel more carefree and makes it much more fun. When we first set out you are just nervous and you want to be perfect. But as the year has gone on we have pushed things and tried different effects and switched up instruments, tried songs sometimes faster or sometimes slower. We are much more naturally in tune with each other now we dont even have to say anything and we can feel where we are taking the music. Im still learning what it means to be in tune with my band. Im not even used to having a band! Its a very deep relationship. You go through so much together its one of the heaviest relationships Ive ever had. I can feel them when we are playing, which is a pretty amazing thing.

OMH: How much do you think all of the live gigs and touring has affected your guitar playing?
SVE: Well, its funny because all of the playing makes me want to let go of all of the strumming a bit more. And Ive finally mastered the few pedals that I have accumulated this year, which includes a tuner pedal that Doug my bass player made me get. Ive never used pedals before. And I was never into tuning before I had a band. But now Ive got the pedals down, I really want to tone back my guitar playing and make it more minimal but sing more. I want to figure out how not to rely on the strumming.

OMH: What did your parents think about Tramp and your newfound fame? Are they happy they bought you that laptop?
SVE: They are my biggest fans. And my mom does say to me that she hopes I write happy songs one day! They come to my shows whenever they can my mom is even coming to ATP!

OMH: So what would you say to tempt people to get them off their sofas and come hear you play?
SVE: [More giggling] Ah, well, we rock! That sounds so funny like something that my dad might say. We rock really hard! Umm, our sound is super stripped-down and raw. Were just a four-piece with no electronics. Were a proper band. And you know my voice is as strong as its ever been. Im still learning how to sing properly and take care of it on the road. But also, inbetween the songs, people can see a little bit more of me Im not this crazy, dark, depressed or angry person. Im actually a total goofball who likes talking to the audience and making jokes. Im just being myself a lot more so hopefully that balances out peoples perception of me.

OMH: When you start writing songs again, will you do it with the band in mind or just go back to it being a solitary process?
SVE: Its going to be a mixture of both, I think. I am still at the stage where I start writing songs by myself even if they are skeleton versions of the songs. But I have written and sent a few skeletons of new songs to my band Ive never done that before. So when we get home and sit down we have stuff to work on and finish together. But another thing Id like to do is meet up once a week and play just to play. No songs in mind, just playing. Because after being on tour for a year and playing the same songs over and over again, it would be nice to let go and see what happens.

OMH: When you finish touring, are you happy for the band to contribute ideas, riffs and thoughts to your new songs?
SVE: Totally! I like to work as a group. I am so used to being the only person, you know, as a songwriter and telling other people what to do. But Im not naturally a good dictator! I really do like sharing ideas. I have two songwriters in my band Doug Keith and Heather Woods Broderick who have an amazing sensibility and I really trust them. Ive never had an instance when Ive been working with people so closely and they understand and get me. They really come up with great ideas even in the 15 minutes before the soundcheck we like to jam while the sound guys finish setting up the mics. We just tool around but they have come up with some really great parts. I cant wait until we have more time together to just play. Were really ready to start afresh.

Sharon Van Etten plays the Shepherd’s Bush Empire on 3 December 2012. The deluxe edition of Tramp is out now through Jagjaguwar. In addition to the original album, it contains demo versions of each album track, plus the unreleased acoustic demo Tell Me. It also comes with liner notes from Sharons journals.