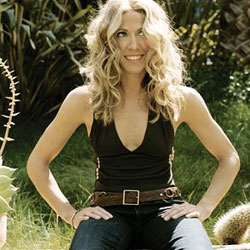 Far from being crippled, Sheryl Crow is back, and she’s sowing the seeds of melodies in her garden of Wildflower. She’s won nine Grammys, acted on the big screen and has notched up 14 years in the singer-songwriter business, hooking up with Lance Armstrong along the way.

What keeps a star like Sheryl interested and interesting for so long? Maybe the old adage is true after all – age shall not wither.

The singer-songwriter is surprised at how fast the music world has changed since her beginnings in the early ’90s, predicting short careers for them. She should know. There are singers who reign above the rest for a year, three max. There are those whom we forget as soon as we flip over the tabloid page. Then there are those who leave a lasting imprint on the history of music and go on to inspire a whole new generation of songstresses. Chrissie Hynde and Joni Mitchell have a spiritual lil’ sister named Sheryl Crow. No point in introducing her anymore (nor her fiancé, you-know-who). The nine-time Grammy winner started out as a backing vocalist for Michael Jackson before going solo and arguably gaining more credibility than her erstwhile employer.

“I’m like the mom of all these young chickadees!”
– Sheryl Crow, growing older and broodier.

After releasing a Best Of in 2003 and appearing in the Cole Porter biopic De-Lovely (“It’s over!” she says of her acting career), Sheryl Crow is back with a collection of melodies on her latest album Wildflower, influenced by her newfound maturity and Neil Young‘s epic album, Harvest.

“I know when it came out that it signaled the end of the first half of my creative life,” she says of her greatest hits album, “and I just thought that because it was successful, it gave me the opportunity to take a little time and write new songs that were slightly in a different direction, as opposed to just rewriting the same Soak Up The Sun. There was no pressure to get on the radio.”

With 11 heavily acoustic-drenched, piano-laden tracks, Wildflower is also the prospect of what maturity may bring as youth is shed. Not that she looks her fortysomething self or anything. In fact, Sheryl looks a lot better than her younger peers like “Britney Spears and these very young girls with big boobs!”

“I get the opportunity to give voice to some of the (world’s) confusion.”
– Sheryl Crow, on her role at a geopolitically uncertain time.

Maybe it’s because when she was starting out, “image was a curse. It was the one thing you didn’t want to be concentrating on ‘cos it made you look like you weren’t credible.” That gave her the “freedom to just write artistically,” but at one point, she didn’t know what to write about any more. Enter some advice from Chrissie Hynde while Sheryl was recording her C’mon C’mon album.

“I guess I couldn’t figure out any more how to finish a song, and I think part of it was that I was really exhausted and trying hard to make some sort of artistic statement. I needed to take a break, and she said, ‘You can stop, you can quit and come back to it, because music is not your life. It’s something that you do in your life.'”

Enter the Big Four-O and George Bush. “Now that I’ve taken time away and I’m older and the world is in such a chaotic state, I feel really lucky that I get the opportunity to give voice to some of the confusion.” According to Sheryl, getting older “informs what you’re writing,” even though Soak Up The Sun was a political song hidden behind some happy-poppy tune.

The record is stripped away from its pop, happy-go-lucky elements and tinged with strong socio-political content. Oh, and a certain champion bicyclerider. “A couple of major circumstances influenced this record, one of which was meeting Lance and starting a new relationship… compounded with what was going on in the world.” Spending a lot of time in Europe with Armstrong also proved to be an eye-opener. “In Europe, you’re getting the news and you’re getting a pretty good idea of what people in Europe think about the United States.”

America’s Bible Belt has also inspired Crow to ask questions that many would simply answer as an excuse for the quest for black oil. “Letter To God is influenced by this massive religious movement that’s going on in the States and how prevalent it’s become in dictating on policy. And really, the whole thing is about whose god is the right god… and then, in the middle of that, you have the greed factor with the oil.”

But the album is also hopeful enough to allow flowers to still grow. “The strongest theme on the record is that no matter how much chaos there is, there’s still beauty that grows, whether it’s life or my little relationship in the middle of this crazy chaos in the world, or whether it’s a flower growing in the crack of a sidewalk, that it is there and you just have to be conscious.”

“He manages to make you feel like he’s singing to you.”
– Sheryl Crow on Neil Young.

As for her musical influences on Wildflower, Sheryl cites Neil Young’s opus. “When I’m getting ready top make a record, I gravitate back to the tried-and-true singer-songwriters. He manages to make you feel like he’s singing to you,” she says of Young. “It’s really about his voice and hiswords and his melodies.” Her influences also range “all the way back to the’60s and even Willie Nelson.”

But it proved to be harder work than she realised. “A song that sounds simple is just not that easy to write. One of the objectives of this record was to try and write melodies that continue toresonate.” And when I tell her she reminds me of Joni Mitchell on this record, she is overcome. “Oh God, thank you! She’s royalty as far as songwriting goes.”

One of the few remaining female rock icons herself, Sheryl is surprised ather status. “I’ve only been making records since 1991, and when you look at the long-standing careers of people like Joni, it’s not very long. But if you look at the careers people are having today, it’s a lot. I’m like the mom of all these young chickadees!”

Sheryl Crow’s album Wildflower is out on 26 September 2005 through A&M. More at sherylcrow.com