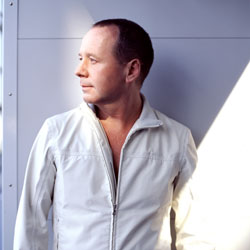 You can’t say you haven’t noticed it – bands of the 1980s, reforming with albums whose publicity boasts of being “the best thing since (insert name of biggest album, usually the first or second)”. Simple Minds, however, have always been around, despite shrinking away from the public eye in recent years. The band’s long association with Virgin ended with last year’s Silver Box.

Now they reside with the likes of Morrissey and Elton John at the troubled Sanctuary label and are releasing Black and White 050505, a record that represents their most natural and instinctive piece of work for some time.

Much of this reinvention has been credited to Jim Kerr‘s new found state of bliss at his Sicily residence, and the influence it exerts on him. Certainly when musicOMH caught up with him he sounded relaxed, and was even prepared to begin with football talk, more specifically of his beloved Celtic and their lack of early season form, crashing to a little-known Slovakian team.

“I’ve been online looking at the Glasgow media”, puzzles Kerr, “and we’ve been scratching our heads, dying of embarrassment! It’s such a shame as the club’s in as good a shape now as it can be, there’s not a sugar daddy but it’s a huge club in a tiny league, which means it’s in a kind of limbo.”

Doesn’t talk of football make him pine for Glasgow though? “I was there the other week actually. Since I’ve been 18 though I’ve always been a restless traveller. Me and Charlie (Burchill) went hitchhiking when I was 16-17 and we ended up going all the way through Europe. At that time Glasgow had an image of being hard, grey and pretty miserable.” Was the band a way out? “No. I really enjoyed the family, the friend. I just couldn’t keep still after that first tour of Europe. Glasgow is going through a renaissance now though; it’s a real hotbed for music. Another thing to bear in mind is that I’m a Scotsman who doesn’t drink. There’s this one culture there, and it involves getting hammered!”

In addition to hitchhiking, Kerr blames band activities for his restlessness. “We toured extremely hard, in fact we probably overdid it. You think you have an abundance of energy but it runs out after a while! My first 18 years were shaped by Glasgow, but in life after that as a person I’ve been influenced immensely by different countries. When you get into a different language you get into a new mentality. I actually regret that I didn’t do more of it, and I’d rather experience a country for what it is than some place that’s a UK enclave.”

“Bloc Party (were) raving about us on the TV, which is nice.” – Jim Kerr on the appreciation of the next generation.

The band’s single Home seems to tackle the singer’s situation head on. Or does it? “I’m not quite sure where ‘home’ is! It’s kind of ironic that Sicily has played a big part in the return to making music again though. If anything, Different World (a track on the new album) is more about Sicily than Home – it’s a musical postcard. Home is more a feeling you carry around with you. It’s like ‘I’m home, but I’m thousands of miles away’. As for the writing, we just put it together wherever we are. Sicily’s influenced the music more in the sense that if you get up in the morning and it feels good, you’re gonna have positive energy to do things.”

Kerr agrees on the ‘less is more’ approach of the new record. “Certainly, we were looking to make dramatic music but we’re keen not to fill it all up, the space. There’s an abundance of ideas, people were bringing so much to it. It is much better if you can have light and shade, and a lot of the time the songs begin from not much.”

A prime example is the closing track Dolphins, a bleak texture with Kerr’s voice almost a cracked whisper. “It really goes on a trip. I have to give credit to Jez Coed for that one. Charlie had the basic idea, then Jez said ‘we’ve gotta take it somewhere’ and he managed to blow it up, but not over the top. The voice was done in a hotel room using some cheap microphone, but we couldn’t get that “shiver” thing going, I was almost under the mixing desk in the end!”

“Sometimes I used to think, ‘What is the point of any hope?'” – Jim Kerr on The Troubles.

Few bands were as politically charged as Simple Minds in the 1980s, but in the light of recent developments in Northern Ireland will Kerr see songs like Belfast Child in a different context?

“That’s really interesting, cos over the last few weeks I was thinking, ‘would we even sing it again?’ and then I thought yeah there is a point, cos it’s a great song. I don’t have an answer to your question though; no one’s asked me that! Essentially it is a hopeful song, although sometimes I used to think, ‘What is the point of any hope?’ Sometimes it seemed wishful thinking. But now I read what the news journalists are saying and it’s like, ‘what was it all about in the first place?'”

Does the continued success of contemporaries U2, New Order, Depeche Mode and the like inspire him? “Well I think they’re an inspiration to record companies and people like that more! Sometimes the climate is more welcoming. Four years later we’re suddenly back in; all it takes is someone to drop your name as an influence. My daughter’s now 20 years old and was telling me the other day about Bloc Party raving about us on the TV, which is nice, and James from the Manic Street Preachers also said some good things recently.”

And with that he’s on to the next interview. There’s little doubt Kerr cuts a mellower figure than the one that toured himself to a standstill in the ’80s and in the process made Simple Minds one of the biggest bands on the planet. Twenty years on, the desire to make music and perform clearly remains.