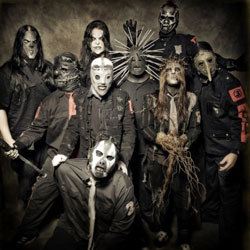 Just when you thought that they could not progress or evolve beyond just wearing “scary” masks and howling like violent creatures of the underworld, the nine-piece band have surprised everyone by moving closer to the basics of rock music.

“Just crank that up in your home stereo,” boasts percussionist Chris Fehn (aka #3). “You’re going to be very impressed by what we’re able to achieve.” musicOMH caught up with Fehn and bassist Paul Gray (#2) to find out more…

The band that put Iowa on the rock ‘n roll map has come a long way, Maggot. All the way to Los Angeles in fact, to legendary producer Rick Rubin’s Houdini Mansion, the rock ‘n’ roll equivalent of its Playboy counterpart, where Vol. 3: The Subliminal Verses was recorded.

“Everybody had a good time, but it was pretty much business,” says Chris. A business which they entrusted to Rubin, choosing him over Ross Robinson, who had produced their first two albums, and without whom, Chris admits, “There would be no Slipknot. Point blank.”

According to Chris, Rubin was the “obvious choice other than Ross. I’m not sure exactly how he got involved. I know he came to see one of our shows in Los Angeles a while back.”

He also produced percussionist Shawn “Clown” Crahan’s excellent side project, To My Surprise. “We’re very lucky that we’re able to work with good producers like Ross and Rick,” Chris says. “And it’s definitely another step for the band as far as just trying something new and keeping everything fresh.”

“There would be no Slipknot. Point blank.” – Percussionist Chris Fehn on the debt Slipknot owe to producer Ross Robinson. They didn’t use him for their new album though…

The choice was also driven by the band’s new desire for melody. “We know what a good song consists of. It just shows the maturity of the writing that we do now. We can write a heavy record every day if we want to, but this time we really wanted to do some other things with melody and stuff like that.”

Rubin’s magic touch has worked wonders. “He basically told us, ‘Your sound is very constrained. Don’t be afraid to go towards that other spectrum and do things that can still be heavy but in a different way.’ So that opened the door for us to try a lot of new things like melody, acoustic guitars, violins and pianos, all this stuff that we would’ve never thought of trying before,” says Chris.

Did Rubin need to put pressure on to get them going?

“Not with nine guys! The only thing we were worried about every once in a while was how much time we had. We ended up writing some of the best songs at the last minute.”

Chris reveals that part of Slipknot’s sound broadening was related to how singer Corey Taylor had demonstrated his vocal range on his side-project, Stone Sour.

“Corey’s a great singer, so we wanted to utilise his talent. It turned out unbelievably.”

Stone Sour may have provided a good exercise in retraining Corey Taylor’s voice but his involvement in that band also heightened rumours of a break-up, especially with Crahan and drummer Joey Jordison also releasing side-project albums and publicly speaking about tension between band members.

“No, it’s not going to be the last.” – Chris Fehn counters rumours that Slipknot’s new album will be their epitaph.

“They made those statements when we were arguing and pi**ed off at each other. And it’s not true,” explains Paul.

Both Taylor and Crahan even predicted the third album to be Slipknot’s last, though.

“No, it’s not going to be the last,” Chris insists. “We’ve realised what a power Slipknot is and how many people we’ve reached. I’m sure these guys, after this cycle, will maybe do their stuff again, but then we will come back and do another record.”

Judging from the band’s current enthusiasm and the excellent result of their reunion, perhas the time apart actually helped? Paul agrees:

“It was very beneficial ‘cos we had spent every day together for eight or nine years. You get on each others’ nerves after a while. So when we came back, everybody had ideas flowing. It was nothing, you know? We’re family, so you’ve got to fight and then make up. And we made up.”

“We needed that time apart to find the love for Slip again and realise that this is really what drives us to continue,” says Chris. “It is kind of a rising up again for Slipknot. We had a lot of time away from it and it made us stronger than ever. It’s like a full-circle finally.”

The band is now doing what it likes best – playing live.

“Next year is pretty much solidly booked,” Chris explains. “We’re a high-profile band and we’re in demand quite a bit, so we’re definitely prepared for it. We’re older now. We know what it takes to be on the road – we know how many pairs of socks to put in our suitcases!”

The band is also packing its brand new masks, redesigned “just to keep things fresh, keep evolving as a band.” Are they scary?

And to keep things even fresher, the band has a second set of masks which are “more revealing”, according to Paul. So one set of masks is scary and the other?

“Scarier!” they both proudly cry out. “But more real,” Paul adds.

The masks not only guarantee them some anonymity, but help turn these (almost) boys-next-door into real monsters of rock.

“When I put that sticky, tight thing on, I know it’s Slipknot time,” Chris concludes. What can you say to that?