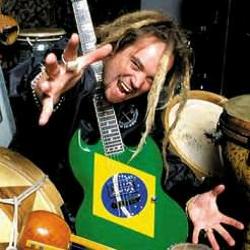 Heavy metal music legends don’t come much grander in stature than Max Cavalera, a founding member of the immensely influential Sepultura, and currently the central figure in the the more diverse but equally successful Soulfly.

musicOMH caught up with the Brazilian thrasher in London to discuss the themes behind the band’s fifth opus Dark Ages, the “colours” of their music and what can only be described as punk theology.
Given his credentials, Max Cavalera is a considerably less imposing individual than one might expect. Perched on the end of the hotel bed in which his jet-lagged eldest son is recuperating from a 16-hour flight, he explains how the unique way in which he views Soulfly’s back catalogue:

“Well, this sounds a little bit crazy, but I kind of think all of my albums have colours. Soulfly 1 was green; Primitive was yellow or red; Three was like earth – brown; and Prophecy was gold. Dark Ages is black, you know – it’s the dark one.”

At this point Max does “scary” necro metal hands, and then cracks up at his own pose before continuing:

“When I was working on Dark Ages I set an entire tone for the entire record on purpose. I wanted darker lyrics, darker music, darker everything… but all still in the Soulfly way.”

Dark Ages may appear apocalyptic (Michael Whelan’s Gulf War-inspired artwork) and sometimes nihilistic (furious battle hymns such as Fuel My Hate), but Max still chose to make space for positivity in his creation. Nowhere is this more evident than in the recital of Psalm 91 in his native Portuguese.

“I find passages of the Psalms as well as many other parts of the Bible to be really apocalyptic and exciting… I think it’s a very punk thing to not do clichs and what is expected. So, to dedicate the Soulfly albums to God – in my eyes that’s a punk thing to do ‘coz nobody else is doing it. It’s really easy to be all like, ‘Oooh I’m evil’ with an inverted cross and all – anybody can say that.”

“To dedicate the Soulfly albums to God – in my eyes that’s a punk thing to do ‘coz nobody else is doing it. It’s really easy to be all like, ‘Oooh I’m evil’ with an inverted cross and all – anybody can say that.”
– Max Cavalera on his own punk theology.

“At the same time though, I got really frustrated with people trying to connect me to religion, especially in America where they tried to stereotype me as this ‘Christian’ guy, and I’m like: ‘What?! Are you f**king crazy?!’ I do hate a lot of ‘religion’ but people like Christ – yeah they inspire me. I mean if you look at Christ He was hanging around with the lowlifes, prostitutes and the losers you know, not going around with those high society motherf**kers you see trying to sell Jesus today!”

Although Max is particular in clarifying that he doesn’t subscribe to a particular established “religious” tradition, he still holds key philosophical concepts close to his heart:

“Salvation is really important, and for me [salvation] is when you figure out your purpose in life – why you’re here – and actually put that into action. But that’s very hard, man. It’s a struggle to figure that out but that’s what’s life’s about.”

Max goes on to explain another tenet that was instilled in him from an early age:

“When my Dad died and my family went poor and my Mom and my brother and sister were living in a one-room shack in my Grandma’s garden, my Mom would say to me: ‘I don’t know how we’re gonna get through this but we’re gonna do it.'”
– Max Cavalera on why hope transcends circumstance.

At this point I am uncertain whether the irony in the title of Korn’s sophomore album title has been literally lost in translation, or if Max is having a stab at being rather ironic himself. Either way, he explains that the light and dark in Dark Ages is merely a reflection of himself:

“It is who I am at times. I have both light and dark in me. Sometimes I have a really bad day and I can only listen to Napalm Death. It’s like, ‘Don’t even show me a Cure CD or I’ll kill you!’ But on another day someone will give me a Slayer CD and I’ll say: ‘No, today’s not a Slayer day, save that for tomorrow.'”

Our talk together is brought to a somewhat abrupt end by the buzzing of a mobile telephone (which Max insists is not his!). But before the dreadlocked South American brushes off his camouflage fatigues and shakes me cordially by the hand, there is time for him to expound one more time:

“I think it was John Lennon who said: ‘Life is what happens to you while you’re busy making other plans’, and that’s what happens, man! So I try to live my life by enjoying the moment, like when I’m on stage with all the energy from the crowd to the exact opposite of that when I go off into the mountains in Phoenix and need to be by myself… You just have to be true to how you feel at the time.”