Sparks: “I dislike Krispy Kreme Donuts being allowed a franchise in Harrods. The real end of the British Empire” – Interview 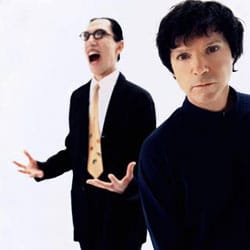 Ron and Russell Mael have been producing music together for more than 30 years. A whopping 19 official albums have been released by the electro duo under the Sparks moniker. The latest, L’il Beethoven, has been described elsewhere on this site as “the best kind of concept album”. Sparks call it, in typically flamboyant style, “their genre-defining opus”. Something of a cult these days rather than the chart act of yore, the brothers have just been announced as part of Morrissey‘s Meltdown 2004 festival in London.

It’s difficult to tell if Russell Mael still enjoys Sparks, the band that brought us such delights as Angst In Your Pants and Thank You For Flying Aeroflot and troubled the upper echelons of the UK and US charts during the ’70s before finding cult status amongst a fervent fan base.

“As you always want to challenge yourself in the studio, it does become a difficult task each time we start a new project,” he says. “Recycling what you’ve done is always easy in the studio; coming up with fresh approaches after 19 albums is a challenge.”

Gaps of years between record releases seem to back this up – but Russell has a different explanation. “The gaps between the recordings are not dictated by the difficulty in recording an album. There are time factors between Sparks recordings when we become involved in non-Sparks projects.”

“Krispy Kreme Donuts being allowed a franchise inside of Harrods… The real end of the British Empire. Shame.” – Russell Mael in mourning for Britannia.

Amongst these are short films – Ron’s even included one on the “deluxe” edition of L’il Beethoven, called Fear Of A Blank Page.

With such a body of work and side projects on the go too, it’s hardly any wonder that Sparks are now being talked of as “influential” in all the right circles – could they follow fellow electro guru Gary Numan back to mainstream success after years in the wilderness? Would Russell prefer mainstream success to being “influential”?

“Being at no 2 in the UK charts AND being influential is best,” he responds. But he’s not keen on those enjoying chart success just now. “I don’t rate pop music highly at all at present. It’s stale, sad, lacking in ambition, lacking in scope, lacking in flair.” But… “Outkast and Eminem are doing their part and they aren’t bands.”

A collection of influential people will be appearing at Morrissey’s Meltdown 2004 – a London festival previously curated by Scott Walker, Nick Cave, John Peel and David Bowie. Sparks are to be amongst them – what will they be doing?

“Yes, we will be playing at Meltdown this year on June 12,” Russell confirms, sounding pleased. “Morrissey has asked us to take part in this year’s festival. We’ll be doing a special show, the first half being a performance of the entire Kimono My House album. The second half will be our latest album done in its entirety.” You heard it here first.

“We’ve never flown Aeroflot and probably won’t until they grease down those engines a bit.”
– Russell Mael on the perils of Russia’s flag carrier.

For those who’ve not heard the new album but already know Sparks’ early works through the compilation Plagiarism, Russell would like to explain that it’s “like comparing apples and oranges. Plagiarism is a re-working of songs from our catalogue, but done in substantially different ways from the original recordings. It has no connection to Lil’ Beethoven. Lil’ Beethoven is Lil’ Beethoven.”

So there. And if you want to know what the album sounds like, Russell has this to say: “If one can describe the sound of a group, then it’s probably based on comparisons of what has come before it. That ain’t good. The fact that it’s difficult to give a quick description of our sound with the Lil’ Beethoven album is a positive thing.” So you’ll just have to listen to it!

Not surprisingly, for anyone who has yet to hear Sparks at all, Russell advises that they start with the new record. “This album says everything you need to know about the band. Start here and then work your way backwards through the 18 other choices.”

“I am against stealing.” – Russell Mael on MP3 downloads…

Russell says his influences include early The Who, early Kinks and The Move, but his lyrical inspirations nowadays are less important, as “Ron writes most of the words” as well as the music.

He does have a favourite gig venue though.

“Sodra Teatern Theatre in Stockholm is where we filmed the Lil’ Beethoven concert for a soon-to-be-released DVD,” he tells us, shamelessly plugging. He’d also like to put it on record that he likes Pret-A-Manger, though not as a gig venue. And he’s not done with cultural references yet. “I dislike Krispy Kreme Donuts being allowed a franchise inside of Harrods. The real end of the British Empire. Shame.”

Having crossed the Atlantic more times than he cares to remember, what does he find most memorable about that city that claimed Morrissey as its own, Los Angeles? I’m heading there for the first time this year and decided to pick this culture-vulture’s brains…