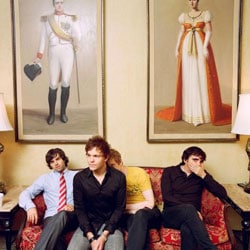 With their two last albums reaching the Top 10 of the Billboard 200, it’s safe to say that Spoon have finally broken into the American mainstream spotlight after more than 15 years of hard work.

In the past two decades they’ve joined and split from a major record label. They’ve appeared on American TV and radio. They’ve even scored a major Hollywood movie. We caught up with bassist Rob Pope to talk about the band’s success, their self-produced seventh studio album, and how to avoid conducting a boring interview.

“It’s snowing like crazy here,” Rob says, calling in from Lawrence, Kansas, where he currently lives. He’s eager to break the ice before starting in on the question and answer routine. Rob achieved a significant level of success with his former band The Get Up Kids, but in 2006 a mutual friend put him into contact with Britt Daniel when Spoon were looking for a bass player.

“When I joined up with the band, I hadn’t really met them before. I sat down and had lunch with Britt at SXSW in 2006, because a friend of mine had thrown my name out there as a potential bass player.” Before long he was in a studio with Spoon, recording a song (The Book I Write) for Will Ferrell’s 2006 movie, Stranger Than Fiction.

Ga Ga Ga Ga Ga brought Spoon into the Top 10 of the Billboard 200. The band decided to take a different approach for their follow-up, shedding longtime producer Mike McCarthy to man the soundboards themselves for Transference.

“I heard about bands from record store clerks, from my friends, and from mail order catalogues.” – Spoon’s Rob Pope, reflecting on how music used to reach its audience in the days before the interwebs

“We didn’t want to do the typical approach of locking ourselves in the studio five months straight with a producer. That we’ve done in the past and we did on the last record,” Rob says. “We did a little bit of work with Mike (McCarthy) in Austin, and just because of scheduling stuff and wanting to try something new and not work with a producer, we wound up not using him nearly as much as we have in the past. Britt did a lot of stuff at his house in Portland, and we wound up keeping a lot of that stuff just because we thought it sounded great and it felt good.”

Spoon’s hometown of Austin, Texas is a cultural hub: it hosts the annual SXSW movie and music festival, PBS’s seminal concert programme Austin City Limits (which spawned a separate annual music festival in 2002), a dozen institutions of higher learning, and about 750,000 Americans. All of which is fairly important information to consider, since American independent music owes a lot to both the American university system and to college towns. Think of Talking Heads meeting at the Rhode Island School of Design before making it big; The Pixies at UMass; Vampire Weekend at Columbia.

Now, Spoon is spread out across the USA. Drummer Jim Eno and multi-instrumentalist Eric Harvey still reside in Austin, but singer Britt Daniel now lives in Portland. Recall that Rob is calling in from Lawrence, though he speaks of plans to move to Portland as well. The band shares new recordings and song ideas online until they can find a common space to rehearse. “We’ve been getting together in various places all over the country to rehearse,” Rob says. “Since we don’t all live in the same city, it just requires more planning.”

But Rob speaks with a tinge of nostalgia for the days before the internet age, when music had to spread by different means. “I come from an era where the first three American tours I did were all house shows. Very punk rock! Not even playing clubs, you know. That’s how the name of a band would spread in those days. It’s kind of different with the internet now, where every band has a MySpace page after their first band practice. Back then, I heard about bands from record store clerks, from my friends, and from mail order catalogues.”

When asked how he managed to succeed over the years in such a flooded market, Rob was hesitant. “That’s a really difficult question, because a lot times I feel like, ‘Yes, I’ve worked really hard’, but there’s also kind of a luck element to it. Ultimately, you’ve got to be in a band that’s great and that can grab people’s attention. And that’s a lot easier said than done.”

After nearly two decades, Spoon has gained enough momentum to break into the top of the charts and onto national radio and television programmes. Promoting Transference, they ran the circuit of late night television, including a visit to Saturday Night Live and a spot near the end of Conan O’Brien’s run on The Tonight Show. “We had a really great time; it couldn’t have been better. It sucks that (Conan’s) off the air right now, but I think in the long run this is going to be better for him – he got so much attention for this. In the last decade, that was where the bands I liked always played. It was always like, ‘Oh yeah, I’m going to see them on Conan – wow, that band’s starting to do really well’. When we got done playing, he came up, and all he wanted to talk about was guitars and gear. He’s a genuine music fan, so that’s truly endearing.”

Other spots didn’t go as well. Spoon were asked to play live on a prominent west coast radio station, and “That was kind of a disaster,” Rob says. “We were recording in a studio and the guy interviewing us was in a different studio via a live feed. And the company we had rented the gear from took it to the wrong studio, so we were late getting set up. It was just this big rush. I didn’t really feel like the guy interviewing us was playing along. Britt did the majority of the interview, and it was just kind of like a dull interview. He didn’t really want to engage us with anything, he was just asking two-word answer questions.”

For one of the most consistent bands in recent memory, a bad radio show appearance is nothing. They’ve gone from indie to major label and back again. From word of mouth and college radio to Hollywood movie soundtrack and national television. Now, with a self-produced album under their belt, Spoon are ready for anything. But music performance is a challenging career path for anyone – the ups and downs are usually quite unpredictable – and Rob had only one thing to say about that: “It’s a great life experience, whether you do it for a summer, or whether you do it for 15 years like I’ve been doing.”

Spoon’s album Transference is out now through ANTI-.