St Vincent: “Don’t work with people who you wouldn’t want to have dinner with” – Interview 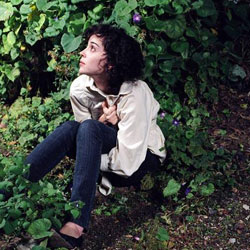 St Vincent is an occasionally storm-battered but usually idyllic corner of the Caribbean. St Vincent is also a bloke called Vincent who was canonised and whose name was then appropriated for various churches. More recently, St Vincent is the band name of Annie Clark, a 25-year-old Oklahoma-born multi-instrumentalist who’s served time in the touring armies of both The Polyphonic Spree and Sufjan Stevens. Clark’s ambitious debut album Marry Me finds her looping samples teased from an elaborate collection of instruments, to create a diverse range of moods and emotions in her songs.

Her soprano voice soars over guitar, piano and a shambling assortment of percussive elements. But Clark’s trump card is her idiosyncratic way in which she she structures her music. With a fusion of jazz, pop, classical and folk influences all wrapped up and overdubbed into cinematic production, it sounds like nothing else.

We meet her ahead of one of her first London gigs. Jetlagged, she’s catching up on sleep in a people carrier outside the venue; we rouse her with a knock on the window. She reclines in the driver’s seat. As she’s here to sing songs from it, we start with a chat about her album.

“I was focusing on the humour of it,” she offers, when asked why she decided on Marry Me as the title for her debut. The track of the same name offers the chorus, “Marry me John, marry me John, I’ll be so good to you”. “I’ve definitely got people screaming ‘MARRY ME!’ at me at gigs, and that’s charming,” she says. “One day I probably will just take someone, you know, as a piece of performance art. ‘You thought you were kidding? Get up here and let’s do this!'” She has just one further stipulation before entering into performance art wedlock. “Their name has to be only one syllable,” she says; further syllables would ill-fit the song structure.

The middle child of nine brothers and sisters, Clark grew up in Texas. By the age of 12 she had her first guitar, though she points out, contrary to any female singer-songwriter stereotypes she may be lumped with, “I don’t own an acoustic guitar.” Her live shows instead see her create huge wailing walls of electric guitar sound, interspersed with everything from horns, strings and skit beats. On record the effect is to make her sound akin to a large band rather than a solo artist. How she translates her material to a live setting is something she’s still getting to grips with – sometimes she appears solo, sometimes with other players in tow.

“I recorded the album before I ever played any of the songs live,” she recounts. “I recorded the album a lot by myself, with overdubbing and multi-tracking, and I didn’t really give it any thought as to how I was going to perform it live.” She adds that she enjoys playing with a full recorded sound and a stripped-down, live sound. “It makes you have to have songs that can stand on their own two feet and not just be the result of a lot of production.”

Perhaps because of her far-flung influences, her songwriting is well able to stand on its own feet. By way of illustration, she trots off some of the artists and works who’ve lately entered the world of St Vincent: “I was listening to a lot of Nick Cave, Ethiopian jazz collections, D’Angelo‘s Voodoo, Wilco‘s Yankee Hotel Foxtrot… I was reading (Michel) Foucault’s Discipline And Punish when I was writing Paris Is Burning.”

“My mode of operating is, don’t work with people who you wouldn’t want to have dinner with. Of course over here it’s pints…” – Annie Clark gets choosy before getting boozy

She sees a direct relationship between her own development as a person and her output as a musician. “As I’ve developed and thought about what I wanted to write, it seemed more and more clear to me that the music and lyrics ought to work together, not like here’s three chords that go along and I’m singing about my feelings on top of them. Not that that’s bad… But I wanted to make something that was cohesive.” As an example of what she means, Clark suggests a jazz standard from the ’30s. “If you look at Lush Life that Barry Strayhorn wrote when he was 15 or something, and Johnny Hartman sings, I’m particularly fond of the Hartman / (John) Coltrane recording, the lyric is so interwoven with the melody. There should be a playful dichotomy between them.”

Relationships between herself and those around her matter as much as that dichotomy, she says. “My mode of operating is, don’t work with people who you wouldn’t want to have dinner with.” She pauses. “Of course over here it’s pints…”

Here in Europe’s largest city, she’s a long way from home. But that’s suiting her just fine. “I grew up in Anywhere, USA,” she says, half-smiling. “When you know there’s a world out there that’s very big and very interesting – you maybe get a glimpse of it in books or TV – it makes you work harder to seek out the world that exists.”

She’s been seeing it since an early age, but her first memories of travel give something of an insight into her music’s shades and shadows, and her later delight in Nick Cave’s music in particular. “We would take family trips to New Mexico when I was little and I have very specific, vivid memories of driving through New Mexico in a lightning storm,” she says. “I guess my dad had a sick sense of humour, listening to that song The End by The Doors, in the pitch black… New Mexico is very desolate. There would be these periodic bursts of lightning that would illuminate the sky for just a moment and you could see these really ominous plateaus in the background.” Later, her uncle, a musician, took her travelling to China, Japan and Russia. Life on the move seems to suit her.

“All I wanted to do as a musician is give back to this collective consciousness and give back to these heroes that absolutely inspired me,” she says. “If your own work gets to contribute back into that pool of people seeking and experiencing life, then that’s fantastic. Music is so powerful. It just is.”

St Vincent’s album Marry Me is out now on Beggars Banquet. Annie Clark tours the USA with full band during February 2008 ahead of an appearance at Coachella, on the Saturday night.