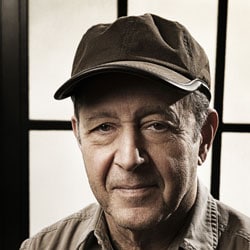 The last time we spoke with Steve Reich, the composer was looking back at his musical heritage at the approach of his 70th birthday. Now, five years on, he is looking forward, bringing his music further towards the realms of rock and pop without forsaking his roots. We begin by talking about WTC 9/11, his musical response to the events of 9/11, released by Nonesuch to mark the 10th anniversary of the destruction of the World Trade Center.

Reich’s family lived just four blocks from the disaster area, so the piece could have had an intense personal resonance for him, had he chosen to respond in that way. Reich being Reich, however, WTC 9/11 is a carefully considered musical offering. “You will know from the booklet notes that when it happened, my family was involved, and my son, granddaughter and daughter-in-law were all in the apartment,” he explains. “At that time I was working on Three Tales, as I’ve mentioned elsewhere. Then for seven years I wrote the You Are Variations, the Daniel Variations, and various other pieces. Then I got a call from David Harrington in 2009 for a third piece. I just love working with the Kronos Quartet, but when they asked, I had no idea – zero – what they were talking about. They made it clear that the speech samples were to use a method where the last syllable was to be prolonged, to make a pitch, and I became very interested in using that technique.”

The link to 9/11 came shortly afterwards. “Two months later a light bulb goes on and tells me I’ve got unfinished business,” he recounts. “Now I could see how to proceed, and I had to contact the phone controllers, and wanted to interview friends and neighbours. I also wanted to include the story of the women who read psalms over the dead for seven months, which was a beautiful thing to come out of an ugly thing.”

Several composers have submitted their own response to the tragedy, and Reich’s label mate John Adams‘ response was a kind of aid to the grieving process, On The Transmigration Of Souls. “John and I are very different composers,” says Reich, “and he was using his thoughts in a totally different way. For what it is it works very well.” His own epiphany for the start of his piece, just like It’s Gonna Rain, had an element of chance about it. “I was just having a shower in the morning and I had left the phone off the hook, and I could hear the sound clearly. The piece begins with that, with David Harrington doubling the telephone with an ‘F’, then John Sherba coming in with an ‘E’. At the very end it goes back to that telephone. It’s quite a different view of things sometimes very close up but comparing with a shot from a balloon of the global view.”

We have been carefully briefed not to ask questions about the CD cover, a topic of great debate due to its vivid imagery of the plane approaching the second tower. With Reich conscious this has already detracted from his music enough, it feels more appropriate to ask how the composer feels his home city has responded to the tragedy. A slight pause follows this, a notable event for someone who speaks with rapid continuity. “Most people have forgotten about it,” he says, “but on the other hand my wife says her values shifted that day, and that she doesn’t get as upset by small matters.”

There were changes, however. “What we did note in the immediate aftermath was an outpouring of generosity. Restaurants were giving away free food to police and firemen for months afterwards, and there was a real sense that we were all in this together. One thing that you would only notice if you were there, though, was the terrible smell – of burnt flesh, burnt wires, and burnt computers. There was a very marked after effect. Then of course we had the repeated events around the world, very different but all linked, and you had your own in London. Everybody around the world said, ‘It’s not a question of ‘if’ anything will happen, it’s a question of ‘when’.'”

The composer is in typically forthright mood as we talk, brusque and occasionally impatient, but polite and expansive in his answers. Fascinating, too – as he explains why performing around the world is still important to him. “As you know my ensemble is retired and I’m out of the band leading position, so what I do now is travel alone. Ensemble Modern, who I played with at the Proms, they are like my other ensemble. Other times I tend to coach other ensembles, I did go to Latvia where I met some very tuned in young musicians. I’ll sit at the audio desk, so if I go somewhere with a performance either I make a small contribution, or I sit at the audio.”

Now he is exploring more of a rock music set up, aiming pieces such as 2×5 squarely at a band dynamic. There is also a strong chance this aspect will be explored in a piece the composer is writing for the London Sinfonietta. “That piece may include electric guitar and bass,” he says, “as well as a large group of woodwinds and brass. They wanted a counterpoint of 13 on live and 13 on tape. I’m having a hard time getting this going, I’m afraid, as the birthday year is why I’m so active on tour. With 2×5 that piece is about working with rock musicians. I have with this piece switched to a small drum kit, and I love using the electric bass because it’s possible to hear the lines interlocking if you write more than one for the instrument. If it’s pizzicato it would be muddy but the bass has a short lasting sound, a punch. It’s a very percussive instrument.”

As well as WTC 9/11, Reich’s new disc includes the Mallet Quartet. Given his familiarity with percussion instruments such as marimba and vibraphone, how does he keep fresh inspiration when writing for them? “I had a very particular inspiration for this one,” he says. “I found that the vibraphone took over in my thinking after Music For 18 Musicians, but then the marimba sprouted a lower octave when I wasn’t looking! The challenge was that using a mallet, you’d get a sound that was too deep, so the importance of the type of mallet was paramount.”

To get the right sound for the lower octave, Reich says he exchanged MP3s with Adam Sliwinski of So Percussion, who made the recording, until the pair were happy with the sound. Does the composer find new musical formats and delivery methods enhance possibilities for future plans? “Those services have killed the recorded music industry,” is the passionate response. “I think if you spoke to people about their mechanical royalties, musicians would declare themselves less than thrilled. As the saying goes 90% is either wired or stolen, that means if you sell 10,000 you’ve sold 100,000.”

“The realities lead to a more active concert life,” he states. “The practical effect is that the recording has become a business card. For well known bands it is so different. When I spoke to Bryce Dessner of The National he said ‘we’re doing pretty well,’ but when the Stones and all these people die the whole metabolism will have died. People love music and love distributing it, and sometimes it is wildly discussed to no point. But the other plus is that you don’t have to go to a recording studio any more. Sometimes all you need is a laptop, some carpet and curtains, you can include your friends when they’re available, and often produce good quality music.”

Reich’s musical discoveries have continued well into his ’70s – so is it now that or a case of reinforcing the music he already knows and loves? “It’s a combination of both. Of the new music I have heard I really like Michael Gordon‘s Temper, and I am perfectly into his decision to get away from tuning on the keyboard. Radiohead‘s In Rainbows really got to me. The National, too. I find people are always sending me stuff; using different instruments for me propelled me into a new situation. It’s nice to have the multiples of the same instruments, though. You have to create a new ensemble. The Double Sextet on my previous disc began with me rejecting the group eighth blackbird because they had one of a kind, but I thought of doubling that and coming up with a kind of chamber orchestra. Instrumentation is my instrumentation!”

There is no danger of him using synthesisers in the near future, mind. “Synths I have always disliked because they are products of sampling,” he explains. “The works of mine that are products of sampling come about from the idea of bringing non musical material in to the music”. Has it been gratifying to hear his works more widely recorded now around the world, and has it thrown any of them into new light? “Not just the recordings – performances too, and yes, it has. Colin Currie‘s group on the South Bank completely knocked my socks off. My group could never have pulled off such a dynamic, expressionistic performance. I was very jealous! I believe there is a recording to come of that.”

Another surprise was from an idiom in which he does not write any more. “The recent recording I heard of Kristjan Järvi conducting my orchestral music, I would have thought this is going to be a dud, but it isn’t. The orchestral still is not my medium, but they do the best job one could ask. The Desert Music is often a small ensemble but he did the original version and did it very well. I find that musicians can play my music now. All the problems my ensemble had to solve have been laid bare and mastered by a generation of players. The assurance and energy they have now was impossible before, and they play it with an energy that is truly thrilling.”

Steve Reich’s latest disc of compositions including WTC 9/11, the Mallet Quartet and Dance Patterns is released through Nonesuch on 19 September 2011.