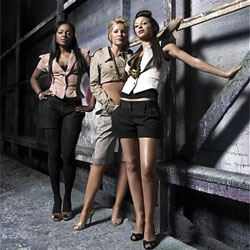 Their line-up’s just changed – again – but the pop powerhouse that is Sugababes looks well set for continued success awhile yet.

Their fourth studio album, Taller In More Ways, topped the album chart in October 2005 despite the departure of founding member Mutya, at the same week as the girls hit number one in the singles, downloads and airplay charts.

Now it’s new Sugababe Amelle Berrabah’s turn to shine with the trio. musicOMH caught up with the girls in Paris for a discussion of pop survival, producers and underwear…
“You have to show either on top or at the bottom, instead of everything atthe same time.”

Heidi, the blonde Sugababe, should give some lessons on how tolook sexy without seeming vulgar and in-your-face to many of today’sflesh-flashing starlets. Dressed in jeans and a velvet blue military jacketfrom Top Shop, Heidi wants to point out when undressing can be trulyjustified.

“We did a photo shoot for Pretty Polly where we’re all wearingunderwear because obviously that’s what Pretty Polly sells.” Obviously.Selling a single is also a good reason to undress in videos, but they’re nottrashy like the Pussycat Dolls, are they? “They’ve got something,” says newmember Amelle, the brunette. “I think they’ve got an edge,” agrees Heidi.

Edginess is something the girls seemed to have acquired over the years, butespecially on their latest album, Taller In More Ways. Producedby Dallas Austin, it marks an important step in the career of a girl band.It almost gives them the credibility that the Spice Girls never had. “Wewent to Atlanta to meet him,” remembers Heidi. “We’re all fans of what he’sdone,” continues Keisha, the only remaining original member of the band.

“Everything happens for a reason. I think we’redefinitely in a better position now…” – Keisha on the departure of Mutya

Everyone is a fan of at least one thing Dallas Austin’s done. He’s producedMichael Jackson, TLC, Duran Duran and countless others. It seems as if he’sone big music encyclopedia. “We asked him loads of questions. Boy, he’s gotstories about Michael Jackson!” says Keisha. And boy, did he push herbutton! “I had a crush on him for about two or three weeks,” she laughs,assuring us that the single Push The Button wasn’t about Dallas. “Seriously,I think he’s amazing. I’m in awe of him.” Working with such a big name was a nerve-wracking experience. “We werereally nervous, but he’s a really nice guy,” continues Heidi, “By the timewe started recording, we felt really comfortable and relaxed.”

The stresscame shortly after the album’s release. Mutya announced that she was leavingthe band. Seemingly out of the blue, her decision only continued to fuel therumors about her strained relationship with Keisha. But Heidi claims it wasjust boredom that provoked her departure.

“It did happen out of the blue,but it was not really a shock. We could see it coming.” Mutya became a motherand outgrew the band. “I think she just wasn’t happy doing it anymore. Shehad a baby and she’d been in the band ever since she was 12. She felt it wastime to move on. We’d always said that we’d never carry on doing it if weweren’t enjoying it any more.”

Keisha obviously wants to play down the rumours that she and Mutya were onlyon singing terms. “I think even if Mutya had made the decision before we didthis album, she would want to finish the album anyway to prove a lot ofpeople wrong. A lot of people were saying that we were going to split upsince the day we basically started. They thought we couldn’t come back withanother successful album. So I think that she kind of wanted to satisfysomething within herself. Everything happens for a reason. I think we’redefinitely in a better position now.”

Ooh, that says a lot about theirrelationship, doesn’t it? Hopefully, things will go better with Mutya’sreplacement, Amelle, first spotted by their manager at a showcase she didwith her sister in another band. The young singer from Hampshire is still abit incredulous at her luck. “I still can’t believe it, really,” shesqueaks. “I’m so happy because I’ve always liked singing and I loved theSugababes.”

All in, recruiting someone who alreadyknew their songs by heart but who also fit the look was a genius way to not waste time. “Our management gotAmelle to record some of our songs,” says Heidi. “We were really surprised.”And Amelle’s big voice made them nervous, according to Keisha. “Once weheard her voice, Heidi said, ‘Could you imagine if she’s this model orsomething like that?’ We’re little!” What a relief – they can swap clothes.

“We know that we don’t sell our records withsex appeal.” – For Keisha it’s all about the music…

Music, however, comes first. “We know that we don’t sell our records withsex appeal.” Keisha has obviously forgotten about their wardrobe in theirvideos. “For us, it’s just about not being bored, trying different things.”And to be fair, they don’t exactly wear the micro-minis andmore-than-midriff-bearing tops that the Pussycat Dolls favorr so much.

“Ithink they would’ve done well even if they were wearing bags over theirheads,” says Keisha, probably thinking of the first time they heard thecatty girls’ first single. Heidi remembers it too. “We heard that song, actually,when we were making this album with Dallas. We were in London and he put iton and said, ‘This is a new girl group and it’s a really good song.’ And wewere like, ‘Man, we should’ve done this song!'”

Maybe next time. “We’d liketo work with him in the future,” says Heidi – perhaps to finish some of thesongs left over from the Taller sessions. “We’ve done some really good songsthat didn’t lake it on the album just because they were too R&B. We’d liketo maybe go back and do something with them.” Surely Dallas is available.