Suzanne Vega: “Even if you’re not in love at the moment, you will be – or you have been” – Interview 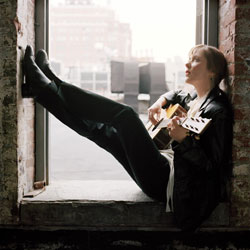 “I ran into Bono and he told me he was writing an opera,” says Suzanne Vega, halfway through an explanation of her song Rock In This Pocket. “I don’t know if he ever finished it.”

That’s what it’s like when you’re the global face of poetic neo-folk: Bono is your homeboy. Twenty-five years since the unexpected success of her debut album paved the way for the likes of Feist, Cat Power and Beth Orton, Vega has begun a mission to rework her own back catalogue, starting with the album Close Up Volume 1: Love Songs. In the new recordings, her coolly insightful love songs have been stripped of extraneous production to reveal the sinew beneath.

Vega makes no attempt to hide the fact that the project was partly motivated by pragmatism, after she found herself with no record label and some of her albums going out of print. But the suggestion that her reasons for returning to her earlier work end there draws an impassioned response. “They were always my songs and I always sang them every night and these are the songs that people love and they ask for, and I sing them all the time,” she says, in a rush. “A lot of them are going out of print and you can’t really buy them any more. It gives me something that I can say, ‘This is my body of work.'”

It’s a body of work that many of us grew up with, and this writer can’t be alone in having her early ideas of love shaped by Vega’s half-folksy, half-knowing lyrics. So, Suzanne, what is it about love songs? “I think love songs are compelling because it’s one of the most universal feelings that people can identify with. Even if you’re not in love at the moment, you will be – or you have been. Even if it’s just a crush on someone in second grade, which is not so different from what a more mature adult love feels like. And as to whether it informs people’s fantasies of what it might be like, I can only imagine that it would. Some of the songs are very fantastical as it is – they talk about what it might be like to be in love. I am interested in that aspect of it.”

Like the rest of us, she turns to songs by others to explore her own feelings. “Leonard Cohen‘s songs are so gorgeous and mysterious, and you think, OK, that’s what being in love is like for him, but he always throws other things in as well so it’s never just simple. Bob Dylan has some great love songs and songs about desire… And Curtis Mayfield has a song called Give Me Your Love that I love, and if you listen to the lyrics it’s so beautiful… Mostly I listen to love songs nowadays to find out what they’ve experienced and if it’s the same as my experiences.”

“I think over time, I’ve become more connected with my feelings than I used to be” – Suzanne Vega

Although Vega plays down the idea that going back to her old songs brought up old ghosts – she has played most of them over and over again for years, after all – they have given her the opportunity to reflect on what she knows about love now that she didn’t know then. “First of all I think as a young girl I felt very cynical about love,” she recalls. “But as time goes on and you lose people in your life, you realise that love is the thing that matters most of all. It’s not something to be cynical about or be embarrassed or inhibited by. It takes all forms and it takes all shapes – it’s really much deeper and wider than you can ever imagine at the age of 20. It can be the guiding force of your life and there’s no shame in having a deep and wide and full love life. I don’t mean that in the sense of just having lots of boyfriends, I mean how do you connect to the community, what is your feeling towards mankind? You feel it in that sense, which is not something I felt 25 years ago.”

Twenty-five years ago Vega released her self-titled debut album and surprised her label, who were expecting a modest return, by selling over a million records and finding a worldwide audience. Vega has rerecorded that album’s biggest UK hit, Marlene On The Wall, for Love Songs. “I was almost racing through it when I first did it, and that’s the one that has settled over the years,” she says. “I watched a video on YouTube of myself performing it, and the whole song takes two minutes because I’m singing it like a train going through.” This time round the song is slower, calmer and more reflective. “I don’t feel as nervous about it. Back then we were all influenced by the whole punk thing and the faster you could do it the better.”

The rapid-fire delivery of the original is the exception, not the rule. Part of what gives Vega’s songs their edge is her air of deliberate calm – even the most emotionally tumultuous stories are delivered in her distinctive, steady monotone. The lyrical shrug from Marlene On The Wall – “Even if I am in love with you / all this to say / what’s it to you?” – is typical of the songs’ reluctance to be swept away by their own drama. According to Vega, this emphasis on intellect over emotion is the habit of a lifetime. “As a child I drew attention to myself because people used to think of me as being weird. There was all this discussion about feelings and why did I not express my feelings,” she remembers. “I think over time, I’ve become more connected with my feelings than I used to be, but I think that’s partly what has shaped my style over the years – being able to say, here’s a moment where there’s something intense going on but I want to write about more than just what I feel about it, I also want to talk about what’s actually happening.”

With this tendency for brutal honesty, has anyone ever been angry or upset about a song that Vega wrote about them – or that they thought she had written about them? “Not exactly… When I wrote the song In Liverpool I was dating someone from London who said I shouldn’t be writing about Liverpool. I was like, ‘What do you know?’ He said, ‘They don’t want you writing about them.’ He was completely wrong, because now when I sing in Liverpool I get lines of people queuing to hear that song.” Considering In Liverpool is a weirdly upbeat-sounding song about insanity and loneliness, this is faintly alarming, but maybe it really is grim up north.

Close Up Volume I: Love Songs is as much a gesture of defiance, of taking control, as it is an exercise in reinterpretation. After a quarter of a century in music, Vega is reclaiming her influential style as her own. “It’s all in flux,” she concludes. “It’s all a grand experiment.”