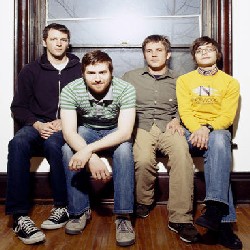 Minneapolis based quartet Tapes ‘n Tapes are the latest alt.rock band to emerge from North America on a wave of Internet fuelled, word-of-mouth hype (see Arcade Fire, Clap Your Hands Say Yeah before them).

A long list of acquaintances on burgeoning Internet site MySpace, well received gigs at this year’s SXSW festival in Austin, sparkling feedback from influential websites and media types and a sound that recalls the much heralded likes of Pavement and Pixies have all combined to ensure that this quartet have been one of the most talked about bands of 2006.
With this in mind, musicOMH grabbed the opportunity to chat to them with both hands just before just their second ever UK show at Nottingham’s Social…

I’m introduced to the band members by their tour manager and invited to sit down for our conversation. On first impressions, these are four impeccably polite, unassuming, unmistakably American, and dare I say it, nerdy, young men, who one feels have stumbled across this media inferno through no action of their own but by pure chance. They don’t come across like rock stars, and certainly not ones people have been salivating over of late, but just lads who enjoy playing their instruments and writing tunes.

I begin by asking how it all began, how Tapes ‘n Tapes were conceived. Josh Grier, founding member, singer and guitarist, explains: “After I graduated from college, a buddy of mine and I moved up to Minneapolis and started messing around and did some recordings.”

“It was fun, it was a lot of running around and playing shows, and we got a lot of great exposure out of it”
– On the whole SXSW experience.

Grier then explains to me how his friend Steve left the band due to not wanting to be in a group without a human drummer. But soon after they managed to recruit just that, a real drummer, Jeremy Hanson, as well as a new bassist, Erik Appelwick, which saw original four-stringer Matt Kretzmann take up keyboard duties. Tapes ‘n Tapes as we know them today were thus formed.

And what about musical influences? Pixies and Pavement are just two specific names that have been branded around – is their any substance in these claims?

Apparently so, claims Grier: “People say Pixies and Pavement, and I don’t think I can deny those,” he admits. “But there’s a lot of other stuff like Flaming Lips, The Beatles, Bruce Springsteen, pretty much anything…Wire, Wilco…” he continues, hoping to present his band as more than just a tribute act to said duo.

On lyrics, and things he writes about, Grier is less committal: “You take them for whatever they are, I think everybody interprets them in their own way, and that’s kind of how I hope they’ll be heard,” he utters, deflecting my query head on.

He’s equally unenthusiastic about describing what his band sound like, struggling to find a sales pitch to the uninitiated. In response to such a query, he stalls: “Indie rock, I don’t know. Loud, soft…what would you guys say?” he says, putting the question to his colleagues. “Eclectic,” they all utter in unison, relieved to have found a term they all agree on, but leaving us none the wiser as to what they actually mean.

I decide to change tack and move on to broader questions, in search of some more substantial answers. The Internet. It’s been a major factor in the rise of the band, their unihibited outlet to the world. Grier is quick to agree that it has indeed been something of a God-send for them.

“Nobody I think would know who we were if it weren’t for the Internet”
– On the value of online media to up and coming bands.

“I think it’s been essential. I think the blogs, Pitchfork and all that stuff – nobody I think would know who we were if it weren’t for the Internet. It’s not like we were going to get written up in papers without people knowing about us,” he explains.

As a result of the online publicity they received, their self recorded album The Loon (out in the UK in late July) started shifting by the bucket load in the States (self sold from their apartment, no less), and made them a must see act at SXSW earlier this year. And the hysteria that ensued after the conference effectively made Tapes ‘n Tapes the name to drop and probably the hottest band on the planet. But what did they make of all of the whole experience?

“It was fun, it was a lot of running around and playing shows, and we got a lot of great exposure out of it. When we were there I don’t think we realised how much people seemed to be paying attention,” Grier offers.

Paying attention is something the record labels were certainly doing, en masse – the aftermath of the festival witnessed a scrum of executives all vying for their signature on a recording contract. “We had a ridiculous number of labels coming to talk to us”, Grier reveals.

They eventually whittled it down to the most appealing, and in the end decided to go with XL, the UK-based home of The White Stripes, The Raconteurs, Thom Yorke‘s solo output, and Nashville teens Be Your Own PET. Was there any particular reason to go with them?

“It seemed like a good fit,” Grier informs. “The bands were good, they were really nice, there’s a lot of creativity allowed – all the bands seem to have total creative control, that was really important for us,” he continues.

“All the bands seem to have total creative control, that was really important for us”
– On signing their much publicised record deal with XL.

It’s perhaps the latter point that is the most significant here. This is a band who clearly enjoy and love what they do very dearly, and aren’t about to sell out to the music industry any time soon. The hype has caught them unawares, it seems, and one gets the impression that as long as they’re able to write songs their way and play to audiences of whatever size, they’ll be content.

Perhaps this will change six months down the line, when it all sinks in, but for now, these are four introverted characters who have been thrown into the public spotlight and still can’t quite believe how it’s all happened. Fame – and indeed doing interviews – is clearly not what they envisaged when they first picked up their instruments, something which their short and often tentative answers suggest.

Grier, for example, recalls a moment at SXSW when Zane Lowe, in an interview, quoted an online blog saying they were the best band in the world. Nonplussed, he replied saying he thought there were “better bands around.” Other figures currently in the media spotlight, you feel, would have not been quite so modest nor taken the comment so wholeheartedly at face value. What’s more, somewhat naively, he tells me of his bafflement at being asked in an interview about appearing on Late Night with David Letterman back in the States, even though it hadn’t been officially confirmed.

Nevertheless, the music is certainly strong enough to do the talking, and as long as they can ride out this wave of hype, there’s no reason why they can’t go on to be merely a very good band who put out records and play gigs, as opposed to one to save rock ‘n’ roll as we know it, change lives or even precipitate the return of the Messiah – which I’m sure they’ll settle for quite happily indeed.