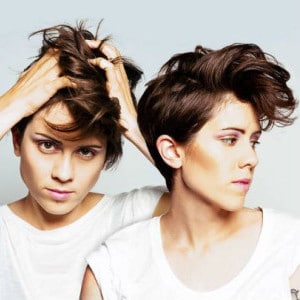 With their much-anticipated seventh studio effort Heartthrob out in the shops this week, we thought it only right we catch up with Tegan Quinn – one half of Canadian twin-sister duo Tegan and Sara – to quiz her on what’s evidently become a pretty hectic schedule for them of late. Supporting The Killers last November on their UK tour was the first time the girls have been back in the UK since 2010, when they played a massive headline show at Camden Roundhouse, as well as a slot at Glastonbury. A set at Coachella is lined up for later this year, and truth be told, their star has never looked brighter; the Heartthrob album already going Top 5 in both the US and their native Canada.

Tegan starts by highlighting some of the main differences they’ve experienced between American and British music festivals: “UK festivals are just massive – most US festivals such as Bonaroo aren’t nearly as big as Glastonbury or Reading. British audiences are extremely enthusiastic, like to get crazy at shows, and generally have a great taste in music.”

We then ask her to give us the back story behind her and Sara’s infamous stage banter. “Some people kind of think of it as our shtick. Early on in our career, we mainly did it to fill time as we didn’t have enough music to fill in all the time. None of it was premeditated.”

“There are fan sites which are purely devoted to our banter,” she continues. “There’s a whole system of people online who trade stories and create MP3s. Apparently, there are a lot of famous stories about funny things like our dating lives, our teens, our mums and our cats. Sometimes I think that our fans know us better than ourselves”.

Tegan then begins to cite some of her past musical influences. “With Heartthrob I was listening to a lot of Cyndi Lauper, but also some early Madonna. I’ve kind of got obsessed with Kate Bush again. I had a lot of the older stuff on vinyl and I was so impressed with the interplay between the vocals and the melodies”.

“During the making of Heartthrob, we were listening to a lot of current stuff as well, everything from Alicia Keys to Katy Perry. I feel pop music right now is actually quite interesting,” she adds. “Near the end of the writing period I went through this nostalgic phase, when I was writing the album tracks Closer and Drove Me Wild. During that time, we listened to a lot of what we listened to in the ’90s – everything from grunge and punk to dance music. A lot of dance music in the ’90s was really relevant to us.”

On Heartthrob’s US release, the album soared to Number 3 in the Billboard 200, behind Andrea Bocelli and Justin Bieber.

But Tegan doesn’t seem to be too bothered about coming behind a fellow Canadian in the American charts. “We were making a load of jokes last week about that. It’s been great that we’ve been successful with this album. We try not to be a band that obsesses over the number of records we sell, how many tickets we sell or how many awards we get nominated for. These are things which are certainly relevant to the topic and we definitely have goals and expectations for each record. But mainly we are thrilled with the fans, who love the record.”

Musically, Heartthrob is a departure from past Tegan and Sara records, carrying more of a stadium-ready synth-pop sound. Although its melodies are bright and euphoric, the album’s lyrics have not strayed from the emotional rawness of their older records. The band believes that this is their most personal record yet. “Although we knew that our fans loved the old sensitive, vulnerable and sad side of Tegan and Sara, Sara wanted to cover new ground. So we decided that we would juxtapose that side of our music with more poppy and upbeat sound, as that was the direction we wanted to go in at the time”.

Tegan & Sara have reeled in a number of heavyweight producers for this album, including Greg Kurstin (who has produced for P!nk and Lily Allen), Mike Elizondo (Dr Dre and Regina Spektor) and Justin Meldal-Johnsen (Nine Inch Nails and Beck).

Greg Kurstin contributed to more than half of the tracks on the album. “When we sat down and decided that we wanted to make a more poppy record, our idea was to try and find producers who had not only worked with big acts, but also had a foundation in indie rock. When I met with Greg he was making The Shins record but he had also worked with Kylie Minogue, Ke$ha, P!nk and Kelly Clarkson – it just felt perfect. Greg seemed to understand the world Sara and I were living in.”

Tegan goes on to explain the role Kurstin played in making some of the songs on the album. “If I played you the demos for songs like Goodbye Goodbye and Closer, it’s very clear that Sara & I were very much leading the songwriting. Sara’s version of Goodbye Goodbye, other than a few chord changes, is extremely close to the album version. Despite this, Greg was able to take those songs and push them to the extreme. Musically, Greg was able to accomplish things that Sara and I were not able to. He brought a really unique vision to songs like Now I Am All Messed Up and I Was A Fool. They were acoustic, very subtle, and very emotional. Borderline depressing tracks which he managed to transform into pop songs”.

On performing the new album live, Tegan remarked: “The new songs are all really fun to play live. They are all very challenging. I feel like I’m constantly on my tiptoes reaching up when I am performing them.”

The twins have toured with some huge bands in the past, including The Black Keys, Neil Young and Paramore. Who would be interested in going on tour with next? “If you asked me that question a week ago I would have said I’d love to do a tour with fun. Now we’re doing a big two and half month tour with them, which I’m really looking forward to. As well as being a huge fan of their music we’re also friends with the guys in the band. Later this year, we are also doing a big festival tour in Australia with Matt & Kim, The Temper Trap and a whole bunch of other artists. It’s like I don’t even have to voice who I want to tour with, it just seems to end up happening. It’s all very exciting.”

With the amount of touring the band has already done, there must have been one gig which particularly stood out from the rest. “There was a point in 2007 after we put out The Con, when things really started to change. I remember one night we were playing in this city a couple of hours from our home town called Edmonton and it was a big show, probably about 3,500 people. We were playing in this really beautiful theatre and the ushers kept making everyone sit down even though fans were still trying to stand up. This caused a lot of frustration and distraction in the audience. I was getting ready to play Nineteen, one of the tracks off The Con and told the sitting audience to ‘close their eyes and imagine they were standing’ during the song. We started to play the song and everyone had their eyes closed. During the first chorus, the craziest thing started to happen – people started standing up with their eyes closed and the crowd erupted during the instrumental bridge. By the end of the song, all 3,500 people were standing on their feet and the ushers just looked so helpless! After that show, I sensed that something big was about to happen with our music.”

We move on to talking about Tegan’s current home town, Vancouver. “I personally think that Vancouver has a beautiful cultural and music scene as well as a vibrant art scene. It is a beautiful city and there’s something really unique about it. The main reason why I live there though is because it is the warmest climate in Canada. It’s where my family and friends live and ultimately I just cannot deal with snow, which you never seem to see there.”

To round off our chat, Tegan attempts to sum up Tegan and Sara in a nutshell for those who haven’t been fortunate enough to hear their music yet. “I think that over the years the one thing which seems to connect all the people which come and see us play is that Tegan and Sara is more than just music. I think that even within the music, there are stories and emotions that are very universal. I think being a fan of Tegan and Sara often means being a fan of us as people, being part of the culture, and finding something in us which you find relatable in yourself. If you are interested in getting to know Tegan and Sara, you must be really interested in becoming part of a culture. I think we create a whole scene; and are not just a band. We consider our peers our fans and not necessarily other musicians. Our audience makes up our scene.”

Tegan and Sara’s new album Heartthrob is out now through Warner.

Tegan and Sara MP3s or CDs

Tegan and Sara on Spotify