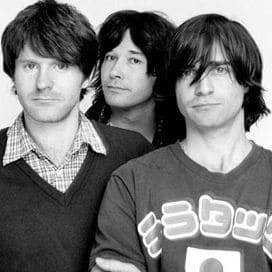 Unfortunately, the rise of The Aliens has recently been curtailed by a tree.

Frontman Gordon Anderson fell out of one, breaking his collar bone and forcing the cancellation of their UK tour, which promised much on the back of the release of their extraordinary debut, Astronomy For Dogs.

The Aliens formed out of the ashes of The Beta Band. Anderson left before the peak of their fame, due to serious mental illness that eventually resulted in electro-shock treatment.

Having been friends with him since they were boys, Beta Band keyboardist and DJ John Maclean and drummer Robin Jones jumped at the chance to join a recuperated Anderson in a new band.

The result is one of the most refreshing albums likely to emerge this year. Owing debts in equal measure to psychedelia such as Jefferson Airplane, The Beatles, Spirit and The Doors and the funky electronica that informed The Beta Band, The Aliens have emerged as a real antidote to skinny jeans and all those jagged guitar bands.

We chatted with John Maclean, some time before Anderson’s failed attempts at an arboreal life.

Hi John, where are you?

I’m in a caf in the centre of London. Where are you?

Northampton. It’s not much fun here. So we’re about a year into The Aliens’ existence now. I read recently you were reluctant to form another band after The Beta Band. What made you change your mind?

Working with Gordon and his songs, and the idea that we wouldn’t jump into it the same way we did with The Beta Band. We wanted to have a bit more freedom about it, and more fun.

When and how did you get together?

As The Beta Band was ending we started working with Gordon again. It was actually originally supposed to be just for the Alienoid Starmonica EP. We made it with our own money for our own amusement, so it wasn’t a case of “let’s form a band and do the whole thing again,” but it kept growing and growing. Gordon had a back catalogue of strong songs, and we wanted to pick the strongest and see if they could do well with a band behind them.

Do you have any regrets about how The Beta Band’s career unfolded?

No, not at all. You can always think “Oh, I wish we’d done this differently ‘cos at least then we’d have made some money,” but we never really compromised, and made a lot of crazy decisions. But that was just part of being in The Beta Band. No regrets, no.

Who would you say are The Aliens’ musical forefathers?

Oh the list is probably too long. Each one of us has a long list of influences, and it’s all about our three sets of influences working together. Gordon’s always been into classic rock: The Beatles, Neil Young, Stones, all the big guns. Whereas I’m more interested in weird stuff like Serge Gainsbourg or funk or hip-hop, and Robin’s influenced by people like Yes, ELP and stuff like that you wouldn’t expect anyone to be influenced by! So when these three sets of influences come together you get something new.

The new album is largely up-tempo and positive musically, yet is fairly melancholic lyrically, there’s a lot of heartbreak there. What are the main themes of the album, for you?

Well with The Beta Band we would take sad songs in a happy direction, which made them unusual. But on this album the sad songs are sad and the happy ones are happy. It’s generally the many moods of Gordon Anderson. A lot of albums you hear nowadays are on just one theme, and they’re all young 17-year-olds playing happy rock, or people singing sad, melancholy soul songs. I suppose we wanted to mix it up and get a full persona.

You’re getting a reputation for putting on a great live show, was that a major ambition of The Aliens at the outset?

Yeah, and that was always the mission with The Beta Band. And I think we even succeeded in becoming better live than we were on record, which is no bad thing. With The Aliens, it will take a while to get production up to the level it was with The Beta Band, with visuals, lights and costumes and things like that. But it’s definitely going to develop, that’s half the joy of being in a band.

“I remember when The Beta Band began there were bands like Menswear and all these sub-Oasis bands, and I can’t tell the difference between Menswear and Razorlight..”
– John Maclean.

So we might see a Funkadelic-style mothership sometime soon?

Ideally yeah! If enough people are willing to pay for it then we’ll take it as far as we can.

You’ve said elsewhere that the current music scene is very similar to when The Beta Band started out. How is it similar?

I suppose I was talking about all the white-boy, skinny-indie bands. I remember when The Beta Band began there were bands like Menswear and all these sub-Oasis bands, and I can’t tell the difference between Menswear and Razorlight. I don’t want to slag them off but it’s not the music I’m interested in. I don’t see anyone covering new ground.

There are no contemporary bands that you rate?

Umm, no. I’m not really in the scene to listen to new music. I followed hip-hop for a long time and then went slowly off it when it became less and less interesting sonically.

Have you got a favourite track on the album?

I love playing Robot Man live, because I feel that’s the one that’s got the most of all of us in it. It’s melodic and dancey at the same time, which are the two main things I like in music. We need to do more stuff like that and get the crowd moving.

What are the long-term plans for The Aliens, a second album?

Yes, and I hope the second album will be more collaborative, as this one was mainly to give a vehicle to Gordon’s songs. It’s going to be different. Whereas the first was a big and very ambitious sounding album recorded in a large studio in London, the second album we could record in a cottage in Scotland, maybe something a bit more experimental.

What level of success would you be satisfied with?

To cover our costs. The Beta Band ran into a lot of debt and it became harder to stick to our principles. With The Aliens, we want to run it like a business. We’re not bothered about making vast amounts of money so we can all buy Ferraris, but we’d definitely like to cover our costs and be able to up the production of stage shows and videos.

So the ambition’s there.

Absolutely. We don’t want to keep playing pub venues and have no videos. We want to let the whole thing grow.

The Aliens MP3s or CDs

The Aliens on Spotify