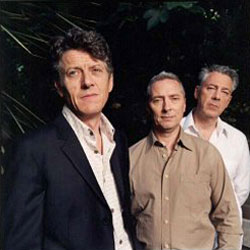 What David Beckham is to headline-seeking, The Blue Nile are to keeping a low profile. The Scottish trio only release an album every five to 10 years, yet it is to a constant, loyal audience who adore their brand of melancholic, perfectionist music.

And it’s not just ordinary punters who wait with bated breath for each Blue Nile instalment, with everyone from Tom Jones to Melanie C having covered their songs.

musicOMH caught up with frontman Paul Buchanan for a deep and meaningful and predictably found him somewhat phlegmatic about success.

Paul Buchanan is a puzzled man. He’s just been told that The Blue Nile’s single I Would Never is at Number 49 in the midweek charts, and that more promotion would be great to get it to move up a place or nine. Such aims are common within the singles market, but then Buchanan’s band have never been ones for exploiting the short format. In fact you could also argue they haven’t exactly exploited the long format, with their recent High album being only their fourth release in the space of two decades.

In that time they’ve jumped around from one label to the next. Presumably that’s due to their recording inactivity?

“Well not really,” says Buchanan. “It’s all a machine, the record company thing – I just accept that and feel quite resigned to it. Sometimes the time gap between albums was due to strains we were having getting the music together rather than pressure from the companies. Of the labels we’ve been with, one went bankrupt and another got bought out. Sanctuary have been excellent to us though.”

“We wanted to make a record that would be irrefutable.”
– The Blue Nile frontman and perfectionist Paul Buchanan on why they take so long to record albums.

With this much talked about gap between albums, one might have thought that the band would feel under pressure to deliver. According to Buchanan, this is not the case:

“I think it’s even simpler than that – it was the feeling that nobody would really be interested. We wanted to make a record that would be irrefutable. The only trouble from apromotional sense has been in getting radio to play it – not that it bothers me too much, mind. But Radio 2 have been very supportive. It’s also about whether people want to buy an album having read about it. I know I would.”

It seems as if success is something that the band can take or leave. Buchanan agrees:

“Partly because we were so isolated, I can genuinely say we were nevertrying to achieve material or literal success. We were very keen to makerecords that were timeless, and in a small way we’ve managed to achievethat. We’ve always been hardcore in our approach to recording. In fact wewere so hardcore we didn’t have to act hardcore!”

Paul goes on to talk about the early days of the Nile.

“We made a single but couldn’t get a proper band together. We used to do very odd coverversions in small bars and travel around in a 15 VW Beetle. Then when we made a single that Linn got hold of it, and gave us a small amount of money together with the freedom to record what we wanted.”

“I can genuinely say we were nevertrying to achieve material or literal success.”
– The Blue Nile’s Paul Buchanan on their reticent approach to stardom.

In a self-characterisation, The Blue Nile’s music can be described as very unhurried, unfolding at a natural pace.

“It probably reflects some sort of commitment from us as people not to go along with the party. If you drive along the motorway, pretty soon you start going the same speed aseverybody else. It’s like that with music – music is so public now, hooked on to advertising and lifestyle. Yet people are individuals, and that’s who we are trying to reach.”

Buchanan agrees on the very personal nature of his songs.

“Some sort of little process occurs – things you observe or notice merge into your own state of mind, and a tiny sort of alchemy goes on. It’s an autonomous process; I don’t pick any subjects beforehand. I think the best songs are an expression of feeling rather than thought. Never in my life have I sat down and thought, ‘Today I’m going to write a song about x!'”

So do the words or music come first?

“They come together. It depends on the extent of someone’s participation as to which gets involved most though, as to what they read into the songs – the imagination of the person listening. It can be a physical or emotional monologue.”

“You don’t want to get to the point where you can’t walk about freely!”
– With four albums in two decades, there’s little danger of that for The Blue Nile.

Speak to a Blue Nile fan and they’ll tell you that one of the special things about their music is its sense of transcendence. Buchanan says that achieving this is one of their constant aims:

“I think that’s what we’re always looking for, which is why we discard a lot of music. It’s the same with photographs – you take a lot of pictures, but it’s only a few that you keep. In public we’re always embarrassed to talk about these things, but transcendental moments can happen in music, in sport etc. If I use intuition I have a better chance of stumbling on something.”

The Blue Nile are touring in February 2005, with a fairly comprehensive itinerary taking in Britain plus some shows in America and Europe. Paul enjoys playing live, although he admits that he was…

“… very nervous to start with. Now I’m actually happiest doing gigs. I take the approach that you should never forget you’re in a privileged position, and I tend to pick up on whatever energy is coming out of the room. I’m looking forward to doing America – Hats did well there of course. Although having said that you don’t want to get to the point where you can’t walk about freely!”

There’s no danger of that, as Buchanan is happy to be in a state where some people recognise him, but “not too many”. Those that do will recognise the frontman of a band whose light continues to shine brightly, and is seemingly in no danger of going out.