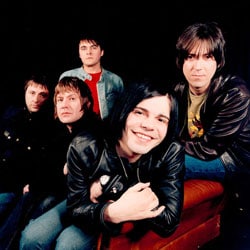 Even for those who didn’t live through the Madchester excitement ofthe early ’90s, it’s not hard to appreciate just how consistent TheCharlatans have been over the past 16 years. As they unleash their ninth opus, Simpatico, and prepare for another round of touring and summer festivals, we caught up with founder member Martin Blunt (no relation to James Hillier-Blount, we hasten to add) to discover the secrets of longevity…

“We were likea band of brothers when we started out – there was a really specialconnection with the five of us,” says bass player Martin Blunt, the man who founded The Charlatans. “But there was never a planto have this career in music, you know; just to get there, get themusic special, make a connection and move on, and fortunately, we’vejust moved on to our ninth album.”

But it’s not been as easy as that; loyal followers of the band willknow of the past – the armed robbery conviction, the tragic accidentthat killed keyboard player Rob Collins, not to mention the recentrelocation of Tim Burgess to LA. It’s nothing short of a miracle thatthey’ve managed to weather the storms and stand the test of time in theway that they have.

I ask whether they’ve thought about writing theirautobiography. Martin isn’t averse to the idea. “We’ve had a couple ofbooks written about us and one was authorised,” he says. “But maybe weshould sit down some time and do a warts and all – the real story!”

When it does get written, it’ll be some story. But there’s stillsome mileage left in the Charlatans saga. Reviews of Simpatico have, surprisingly, commented on its dark content. “I think thelyrics are very dark,” Blunt concedes. “The music is mellow but whenyou put the two together it catches you off guard, which I reallylike.”

“I really like his lyrics,it’s like Alan Bennett with music.”
– Martin Blunt on Dirty Pretty Things’ Carl Barat

But it’s not just the lyrics which have raised eyebrows – there’salso a noticeable Clash influence evident on the album. “I thinkthat was more from Tim, he’s always been a really big fan of The Clash,and I think he’s heard albums like Sandanista and London Calling.”Blunt explains. “I never really get Sandanista myself because I thinkthere are too many tracks on it! I think some of them are stuck on.It’s like when CD’s first came out when you could get 74 minutes ofmusic on a CD. A lot of bands fill that up but you don’t need to dothat. But I think London Calling and Combat Rock are pretty outstandingalbums.”

Perhaps in keeping with the Clash influence, there’s also someexperimentation with reggae on the album. “There is a twist on there.The other band which we all agreed was fantastic was the LCDSoundsystem. One of the first tracks we did was City of the Desert- that’s got a reggae tip on it. But it’s not like, oh, this monthwe’ve been mostly listening to… There’s a twist on there becauseit works well.”

Fans of the band should rest assured however, that The Charlatanshave not abandoned the sound which has characterised their music overthe past 16 years. New single Blackened Blue Eyes is classicCharlatans. With a track written by Blunt and keyboardist Tony Rogers,it was sent over to Tim who apparently “straight away got the lyrics onthere”. In fact, it sounds so much like the Charlatans that apparentlya friend of Blunt’s, on hearing it on the radio, thought it was someoneelse ripping off The Charlatans. “I didn’t know how to take that,”Blunt puzzles. “Is it a compliment?”

“The trademark Charlatans sound is more from the boys at theback.”
– Martin Blunt on his band

Of course it is. But it does probably explain Tim Burgess’s need tostrike out on his own a couple of years ago with solo album I Believe,which sounds surprisingly un-Charlatanesque. “That was why it was asolo album, because it really wasn’t anything that was going to besuitable for the band,” Blunt says. “I think the songs were verypersonal.” Did you like it? I ask him. There is a slight pause. “It hadits moments. He needed to do it.”

So if not Tim Burgess, who does brings the Charlatans sound to theband, in Blunt’s opinion? “Tim brings the twists on moving forward,” hereplies. “But I think the trademark sound is more from the boys at theback. We were also really fortunate to find as likeminded a person toRob Collins as Tony Rogers [Rob’s replacement on keyboards]. That Ithink dealt us a good hand so that we could carry on at thatpoint.”

Speaking of influences, I ask how bands like Arctic Monkeysand Franz Ferdinand affect The Charlatans’ music, if at all. “Itake an interest – I’m still a music fan,” Blunt affirms. “I wouldn’tsay I was affected by them, but I can see how good they are,particularly the two bands you’ve mentioned.” So you like them then? “Ohyes. I actually saw the Arctic Monkeys at SXSW with Carl[Barat] from the Dirty Pretty Things. I really like his lyrics,it’s like Alan Bennett with music. The same with Franz Ferdinand -they’re good.” But it’s not just the British bands which are ticklinghis fancy. “The last good album I heard was a band from Canada calledBlack Mountain. I really enjoyed it.”

“I enjoylive more than anything. It’s the best thing in the world that peoplehave actually gone and got tickets to come and see you.”
– Martin Blunt thanks The Charlatans’ fans

With a tour booked and ready to go, The Charlatans are about to gointo rehearsals. I ask how easy it is to start playing together again.Apparently not that easy. “Nothing is taken for granted,” he says.”It’s not about being slick, but to realise where you are so youhaven’t got to think about it. I always like it when it’s a solid setwhich works really well.” And fans who have already bought tickets onthe tour might also like to know the following: “We rehearsed a trackoff the new album, Muddy Ground, and went straight into You’re SoPretty afterwards and they run really well together.”

Blunt obviously enjoys the playing live side of his work. When askedhow long he could go on tour for, he’s enthusiastic. “Forever! I enjoylive more than anything. It’s the best thing in the world that peoplehave actually gone and got tickets to come and see you. With us I dothink even now, there’s something a bit more dynamic live.”

To witness some of that dynamism, see the band on tour in the UKthroughout April and May or catch them at the T In the Park and V Festivalsin July and August.