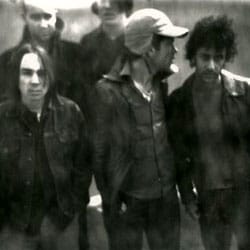 The Crimea’s Tragedy Rocks is the sort of album title that immediately makes you sit up and take notice, and the same can be said for the music of the London quintet.

Their debut album evades easy categorisation, exploring as it does a good many styles along the way, but with song titles like Lottery Winners On Acid and Gazillions Of Violins it was never likely to be otherwise.

Having just begun a tour of the UK, their opening night at Harlow isstill fresh in the band’s memory. “It was the Wild West!” says Davey,”there were thirty kids all walking across the dual carriageway on the way,and then when we were playing the electricity went out and we had to powereverything from our van. It was like being in The Libertines! We’vegot Liverpool, Northampton and Cardiff to come and the reaction’s beengreat so far. I don’t know if you’ve seen The Beatles, how peopleused to react to them? Well, no-one’s given us a panning, so long may itcontinue!”

“No-one’s given us a panning, so long may itcontinue!”
– The Crimea’s Davey MacManus.

Such humour punctuates the interview, the group seemingly enjoying eventheir promotional work. Davey does much of the talking, naturally, but thenhe’s the one singing, writing the songs. When he’s not talking and writingsongs he also writes books. The creative ventures don’t often overlap,however. “It’s so much harder to write a lyric, with a book you can justwrite down anything on a piece of paper but with a lyric it has to fit themusic, sound right”.

His lyrics are fiercely original, an approachreflected by the song titles. “Yeah. Well, I looked at the words of theBackstreet Boys!” (Cue laughter from Andy and Joseph.) “No, Idefinitely try to have original lyrics. People just don’t make an effort ina lot of pop music. Some guy sent in a review saying that we were a bitmorbid but if you look at the song Girl Just Died, the lyrics say thatpeople have an obsession with sex and death. I say, “Let’s embrace it”, notpretend it’s not there!” MacManus writes incessantly. “Erm, yeah. I thinkso. But then you could say that I talk a lot of shit!”

So incessantly in fact, that he commits to a regular blog that can befound through The Crimea website. His lengthy but involving texts includenotes on the Pakistan earthquake and its relative disappearance from thenews. “Well you know I’m a bit of a natural disaster junkie, when it wasgoing on I thought it was important to talk about it, wanted to talk aboutit. With the earthquake it just seemed so ridiculous that 112,000 peopledied and yet 2,000 or so people died in New York on September 11th. I’m nottalking it down, but it just makes the point that when stuff happens in thewestern world so much more is made out of it by the media.”

“I looked at the words of theBackstreet Boys”
– The Crimea’s Davey MacManus on lyrical inspiration.

Returning to the band, Davey talks about their recent touring exploits,which have seen them spread their wings to bring their music to a wideraudience. “We went on a tour with Billy Corgan in the States for awhile; we did 12,000 miles in three months. With no air conditioning! Youhave to share a bed (nudge nudge, wink wink from Andy and Joseph) and justwake up at four in the morning covered in sweat. We went down south in ElPaso, where it really does feel like the Wild West, more like Mexico. We’veplayed there this year and last year – really loved it!”

A recent high profile performance for the group was at the Digital MusicAwards, but Davey has mixed feelings about the experience. “It wasbrilliant, it was a shock you know, they managed to get us in at the lastminute. I was pretty nervous, not used to being on telly and so you couldsee the whites of my eyes a bit, but no, it was a good experience.”

So what do the band aim to portray in their music? Ever helpful, Daveyresponds with “Er, I don’t know. It’s like Kylie Minogue beingshagged by…Tchaikovsky.” “From behind!” smirks Andy. And are they, as manymight suggest, similar to The Flaming Lips? “Well”, ponders Joseph,”I think there’s a certain mentality that’s similar about us”. “I had thatYoshimi”, adds Davey, “and I personally really like The Flaming Lips andthink some of the psychedelic comparisons are justified, to a point.” “Atthe end of the day it’s down to you guys,” offers Andy, “you’re the oneswho hear all the music and form these opinions. We don’t think about it toomuch.”

“We’re from all over – Dublin, Zimbabwe, Andy ishalf Russian and half Welsh…”
– The Crimea’s Davey MacManus on his internationalist London band.

Moving on to other bands the Crimea respect, Davey responds that”Ash were really good, Charlotte Hatherley and Tom Vekas well. I listened to a band called Stars recently who I reallyliked, and Eels too.” “Girls Aloud!” comes the shout from themiddle. “That was Andy, by the way!” excuses his lead singer.

The Crimea are described as hailing from Plaistow, but that proves to bepretty far from the truth. “We’re from all over – Dublin, Zimbabwe, Andy ishalf Russian and half Welsh” (I think they’re being serious…) “So Plaistowis just a stopping point for us. It’s a horrible place actually.”

Meanwhile the band, though touring heavily, remain focussed on theirnext move. “We’ve just been working non-stop ever since we got the dealwith Warners. Music is our only way of fighting back, we don’t want to be apoxy band that receive a load of good stuff for our first album and thendon’t do anything about it.”

Fighting talk then, from a band prepared to make sacrifices fortheir music to succeed.

The Crimea MP3s or CDs

The Crimea on Spotify