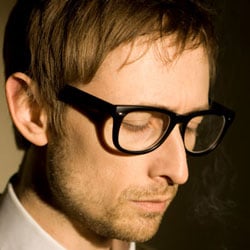 “I woke up this morning and I had a hangover, and you know when you have a hangover and you don’t think you deserve it?” Neil Hannon is feeling lightly peeved. It’s the morning after his solo concert at the Tabernacle, and he’s drinking tea to offset that special morning-after feeling.

“So I’ve been doing interviews, and it’s fine at the beginning when you’re on a coffee high, but then you start to unwind. I think I just drank a lot of wine during the gig. That’ll be it”.

Hannon is in typically impish mood, here to promote new album Bang Goes The Knighthood, and there is an inner contentment about what he has achieved. “It’s certainly a ‘satisfied that I know what I’m doing’ sort of state,” he concedes. “I was in Ireland to record it; it was the first one I’ve done outside of London. But of course I came to London to do the orchestrations, and it was fantastic – because due to the recession, all of the best musicians were free! So we had a real crack team, an ensemble of great brilliance. We got all the six tracks with orchestrations done in a day, and we had a spare hour and went to the pub afterwards.”

Orchestration is a discipline that comes naturally to Hannon, but it’s not exactly his first love. “I didn’t do it this time, I have to say,” he admits. “Part of my new ethic is not to do things just because I can. I could do it, but it takes it out of me and takes a lot of time, so it’s much easier to get Andrew Skeet on the phone, send him some tracks and say ‘make this one sound a bit like The Days Of Pearly Spencer’, or something like that. And he does it, and it’s brilliant. I like to be able to know what I’m talking about, but don’t have to do it all the time!”

For this album the The Divine Comedy is more of a one-person concern. “Part of the reason I’m doing it solo on this album is that all of the songs were written on the piano,” he explains, “so… what was I talking about?” He trails off – clearly the tea is wearing off. “Oh yeah!” He’s back in the room. “So basically they work perfectly well with just one man and a piano. Some of the older ones aren’t so easy in a one man scenario. I killed myself trying to practise the solo on If…; it makes my head ache. But it’s all about practise I guess. Damn. It makes me think of my daughter learning the violin, she’s so lazy – just like me.”

The Divine Comedy – At The Indie Disco, from Bang Goes The Knighthood

Really? He nods. “It takes a certain type of mindset to sit down with what other people are telling you to do. I was never the type to do what other people told me to do, but I worked my arse off on things I wasn’t meant to do!”

Bang Goes The Knighthood contains several songs pertinent to the current political and financial climate in the UK and Europe, and none more so than The Complete Banker, which tackles the banking crisis head on. “I’m just surprised I got there first. I mean, I left it on the shelf for about a year and a half.”

It was an instant response, then? “I wrote it in a state of apoplectic rage”, he says laughing, “which is not something I do very often. I’m not John Lydon, and anger to me is not an energy, it just gets me hot under the collar and I feel slightly queasy. If somebody cuts me up at the lights I don’t feel good about beeping them, I just feel bad about it for about 10 minutes afterwards. With that one I just really tried to put the boot in, because it got me so frustrated that we all just seemed to take it lying down.”

It sounds like he’s almost as angry with the public as with the perpetrators of the financial meltdown. “For years and years capitalism has been absolutely rampant and everybody said ‘Be quiet, it’s good for everyone. All this money will be created and trickle down’. And it’s absolute bollocks! Because these people are naturally greedy bastards, they go too far and the whole thing collapses, and we have to pay for it. And nobody says ‘boo’; they just say ‘oh well, this is what happens’. It’s just crazy!”

So what of the new, much vaunted UK coalition government of Tories and Lib-Dems? “To be honest, I hate to say this, but I’m quite pleased and I think they’ve done a good job. At last the UK has come to terms with the idea of what continental Europe has been doing for years. There is no one party that is right, and no one overarching ideal. It’s the death of 20th century politics, which was hard right wing, hard left wing. People don’t work well under one scheme or another, you need to be allowed the freedom to express yourself and operate a business, but you also have to look after the people who aren’t very good at it, because not everybody can do that. There is no shame in having an ordinary job, you know?”

“I wrote it in a state of apoplectic rage, which is not something I do very often.”
– Neil Hannon on the genesis of The Complete Banker,  from Bang Goes The Knighthood

He sees the new set-up as an improvement on the previous incumbents, at any rate. “I think it’s a good thing that people are willing to meet in the middle and have some common sense. I was never a Tory, that’s for sure, but if their heart’s in the right place then it might work out OK. It’s certainly better than fucking New Labour anyway, which was a big swindle. I voted for Blair twice, I couldn’t believe it.”

Turning to lighter matters, and the cover picture on the new album, which sees Hannon in the bath with his dog Leia. He talks of her with real affection. “She’s getting on a bit now, so it’s only right that she becomes iconicised, if that’s the word. She was very good and patient, and it was slightly weird being sat in the bath with a dog. It was warm and furry! We were there for half an hour, and she was ever so good. We did a lot of shots, and to begin with I thought we’d screwed up, but then that one shot, you couldn’t take your eyes off it. There’s something about the way we’re all looking, the strange wide-eyed innocence. I expected people to go ‘what the hell is that’ but they haven’t. I was finding a way of summing up the title in an un-pornographic way!”

The MP3, of course, does not allow for cover art. “I hate that”, he says with some feeling, “but the saving grace is that vinyl is having a resurgence. If you look at the download sites the covers these days are all of someone’s face, because when you’ve got a tiny bit on iTunes that’s all you can get. We went completely the opposite way with The Duckworth Lewis Method; we went as small and detailed as possible, just to piss people off!”

One of the standout Duckworth Lewis songs from their concept cricket album in 2009 was Meeting Mr Miandad. Has the cricket legend heard about it yet? “No”, says Hannon, slightly sorrowfully. “Thomas (Walsh, aka ‘Duckworth’ to Hannon’s ‘Lewis’) found a lot of conversation happening on the internet in regards to that song, so they were definitely discussing it. Sadly I don’t know what they were talking about! So if there is anybody out there who has got in touch with the real Javed Miandad, please let us know. There was one interesting thing, someone I was talking to had been at dinner with Mike Gatting and he said about Jiggery Pokery, and he said ‘I know about that, and I’m never listening to that song!’ I feel bad, because I think he comes out of it quite well, and we end up saying we hate Shane Warne, so we’re definitely on his side.”

“It all worked out splendidly I have to say, but I have to reiterate that we had no master plan.”
– Neil Hannon confirms England winning the Ashes was not necessarily down to the work of The Duckworth Lewis Method

Continuing his appraisal of Duckworth Lewis, he proclaims, “It all worked out splendidly I have to say, but I have to reiterate that we had no master plan. Because we had no expectations we had no qualms or stress, and…” he goes quieter, overtaken by a sudden faux modesty “…suddenly it’s one of the top three albums in the UK, according to the Ivor Novellos.” Indeed; the songwriting awards featured a nomination for The Duckworth Lewis Method album earlier this month.

Duckworth and Lewis will be reunited on stage at Richard Thompson‘s Meltdown at London’s South Bank Centre in June. “At the moment we’re just trying to work out how to fill 90 minutes! We’ll see what happens.” And what of the rest of the year? “We’re promoting this album, and somehow I have to oversee Swallows & Amazons at the Bristol Old Vic in the autumn,” he replies. It’s his first attempt at a musical and was originally submitted to Nicholas Hytner at the National Theatre. “I’m also meant to be writing an ‘opera short’ for the Royal Opera House,” he remembers. “They do a series of 30 minute operas by people who are not expected to write operas, though I probably fall into the category of people who would be expected to write operas. And who wouldn’t want to write an opera?”

More than anything, though, Hannon enjoys playing piano alone. “I can do anything, and no-one can tell me that it’s shit! I’ve been playing a song that I wrote last autumn for ages, and nobody’s heard it – and it’s great! Well I think it’s great, but it’s a lovely feeling knowing that it’s not in the public domain. I don’t know about other art forms, because I can’t do any of the other ones, but I do like that feeling, the initial moment of creation, when you think there’s something happening. Suddenly it’s like, ‘quick I need some lyrics – what’s in the paper?!'”

The tea is drained, but Hannon seems to have enjoyed the interview. Which is pleasing, given it’s for musicOMH, a publication that was born of a Divine Comedy fan site. “Yes, I’m a patron saint of sorts!” he exclaims. “I can’t believe it – look what I’ve given birth to!”

The Divine Comedy’s new album Bang Goes The Knighthood is out on 31 May 2010 through Divine Comedy Recordings. The Duckworth Lewis Method appear at the Royal Festival Hall, London, on 17 June as part of Richard Thompson’s Meltdown; The Divine Comedy play at Somerset House, London on 17 July. Full details can be found at thedivinecomedy.com.