The Duckworth Lewis Method: “It was written in the stars” – Interview 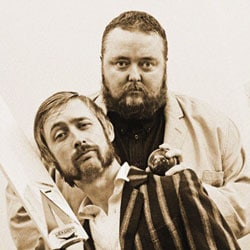 Neil Hannon does not and will not tweet. “I’ve never tweeted in my life,” declares the man also known as ‘Lewis’ for the purpose at hand. “Whenever I say anything remotely amusing, Thomas tells me, ‘THAT’s why you should be on Twitter.’ But I just want to tell you! I want to make you laugh. We’re having a conversation!”

Thomas Walsh, aka ‘Duckworth’ this afternoon, has other ideas. “I’m convinced every major news story on BBC, ITV, Channel 4, all of it is quoting Twitter. Gordon Brown twitters, doesn’t he?” No, but his wife Sarah does. “See!” says Walsh, triumphantly. “They’re quoting verbatim from Twitter, mis-spellings and all,” he continues, before Hannon rejoins with “And children are going to think, ‘That’s how you talk, that’s how you spell’. The world is coming to an end.” He bats it back to Walsh, who concludes, “If a billion people spell “great” as ‘G-R-A-T-E’ in one day, the world will blow up.”

For this summer, Neil Hannon and Thomas Walsh aren’t just completing each other’s sentences. The two have collaborated in making The Duckworth Lewis Method, a whole album about that most summery of sports, cricket. It’s a concept of sorts that in lesser hands could have been bowled out for six. But Hannon, originator of The Divine Comedy‘s word-rich chamber pop, and Walsh, with a back catalogue of heart squeezing melodies with Pugwash, have created a world of historical context, unabashed nostalgia, sports fan geekery and melodic perfection.

But why cricket? Why not, say… rugby? “Because we like cricket!” offers Hannon brightly before falling back with a fit of the giggles. “We’re both avid sports watchers, but we couldn’t do football,” he says, gesturing at Walsh, “‘cos I’m a Man United fan and you’re Liverpool, and never the twain shall meet.”

“I tell you why it was,” counters Walsh. “There may have been some tiny brain cell somewhere in our heads that said, ‘This could be fun’.” “Yeah,” nods Hannon as Walsh continues. “We didn’t plan anything. We didn’t sit down and say, ‘Let’s write about cricket.'” Hannon: “I have the feeling it happened when you were making a joke and sang ‘I’m the nightwatchman’; we all fell about laughing, and that’s where it all began.” Really? “The fact is, neither of us can remember how it began,” drawls Hannon, elliptically.

“An album of football songs? We’d kill ourselves…” – ‘Duckworth’

The pair met at Father Ted writer (and ardent tweeter) Graham Linehan’s wedding. Walsh’s band were the wedding band and Hannon, who’d written the series’ theme tune (Songs Of Love), asked to borrow his guitar to play it. “Months later I got an email from Graham, and Neil’s email (address) was in there,” recalls Walsh. He was looking for a singer to “add something classy” to a charity single he was recording. Hannon accepted the invite. At the end of their first session a cricket report came on the radio; Hannon asked Walsh to turn it up, assuming he didn’t care about the sport. But he did. Two cricket fans stared into each other’s eyes. “It was written in the stars,” Hannon swoons.

They settled on an album, rather than a single, perceiving sport singles to be of the moment, and to have no longevity. “And an album of football songs? We’d kill ourselves,” states Walsh. “There’s not really enough subtleties in football,” agrees Hannon. “And cricket goes along with historical themes, historical moments; cricket is this timeline to great things that have happened,” continues Walsh, “while football just… happens.” “I don’t know why football music doesn’t attract me,” muses Hannon. “It’s got that loutishness, hasn’t it?” replies Walsh, continuing “You don’t really want to sit down with a glass of Pimm’s and listen to a record of football songs. That probably wouldn’t happen.” They could quiz each other till those cliched cows come home; this is less an interview and more an umpire’s benign adjudication.

“My other great sporting love is Grands Prix,” announces Hannon unexpectedly, “but that would be a bit of a ‘LET’S ROCK!’ kind of album, wouldn’t it.” Walsh instantly recalls a song about Jackie Stewart called Faster, from 1979. So we should expect a Formula 1 album next? “No,” says Hannon flatly. “The only other sporting album I would make would be ‘Duckworth Lewis 2: The Other Cricket Songs’. Cricket’s just something that you could write songs about forever.”

Despite this, their work methods ensured there was no leftover material. If ideas didn’t work they were instantly discarded; if they clicked straight away, they were developed. The Age Of Revolution, says Hannon, “sounded like a hit single”; they spent time perfecting it accordingly. By contrast Rain Stops Play, more of an interlude than a song, was knocked together in minutes.

The project’s lyrical high point is Hannon’s piano-led tour de force Jiggery Pokery, about “the First Test of the Ashes series, 1993” told from England batsman Mike Gatting’s bemused point of view as he faces Australian Shane Warne for the first time. “There’s something about Mike Gatting’s face that’s staggeringly melancholy,” muses Hannon. Walsh reckons he looks like Bungle from Rainbow. “Can we not put that in!” giggles Hannon, trying to keep a serious face and utterly failing. “No, no, I mean it’s just this big warm friendly face, you know?” protests Walsh innocently.

“When I’m writing is when I’m happiest, when I’m left alone. I yearn for that regularly…” – ‘Lewis’

As for the song’s music, Hannon likens it to a pantomime. “There’s a bit of Roobarb & Custard in there, isn’t there. I’m not saying I ripped it off, but it’s not the most staggeringly original music I’ve ever come up with. But that wasn’t really the point,” which was that he wouldn’t have released it as a Divine Comedy song. “That would have been too close to the bone; people would have said ‘He’s gone right up his own arse’, you know?” So Duckworth Lewis has allowed it to see the light of day. On “the babooning” middle section – listen to the song to see what Hannon means – guest stars Phill Jupitus, Matt Berry and Alexander Armstrong ham it up; they’re all palpably having a ball.

Walsh then treats us to an extensive detour around his own songwriting process; he writes from 4am to 7am, with a sandwich, “in the nip”. “My writing style is much more ‘day job’,” interrupts Hannon, steering us clear of unbidden images. Walsh will write nothing for 10 months of the year and then “splurge everything out”; Hannon writes every day. They agree that their different working methods explain how they write well together. “When I’m writing is when I’m happiest, when I’m left alone. I yearn for that regularly,” sighs Hannon, wistfully. “You urinate regularly?” tinkers Walsh.

The Duckworth Lewis Method album is the first release on Hannon’s own Divine Comedy Recordings. “It’s all gone swimmingly!” he says. “Who needs record companies?” Walsh recalls friends of his “out there, touting their records round the majors, and I’m phoning them up and saying ‘Stop it!'”

Instead of record companies they big up Barbara Charone, legendary press guru to a glittering roster of A-listers including Madonna, who’s “ridden roughshod over the broadsheets for us”, as Hannon puts it. “She’s a legend,” agrees Walsh. They’ve enjoyed a feature spot on Radio 4’s Today programme and they even popped up in a video on the SCC’s website. “We thought we wouldn’t get any press, so we’re delighted,” grins Hannon, “but the icing on the cake is that all the reviews are good as well. People actually like the record, which is the main thing.”

The Divine Comedy and Pugwash are still going concerns, a state of affairs that will likely leave The Duckworth Lewis Method as a side project, a Twenty20 match to their test cricket. But it’s given its inimitable creators a veritable trophy cabinet of enjoyment. What are the odds on the making of Duckworth Lewis 2?

The Duckworth Lewis Method is out on 6 July 2009 through Divine Comedy Recordings. The band play at the Latitude Festival in 16 July 2009.