The Field’s Axel Willner: “We have one foot in the techno tradition and one foot in… something else” – Interview 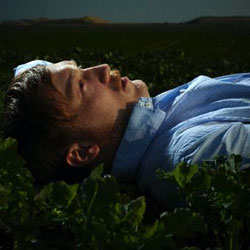 Stockholmer Axel Willner created and is The Field. He slipped out his debut album of ambient techno, From Here We Go Sublime, in 2007. Through word of mouth over the following months, more and more people discovered that its title was curiously descriptive of a quite stunning album. Fast forward two years and Willner has broken cover to unveil the follow-up, Yesterday And Today. This time he’s co-opted two additional musicians and formed a band, creating a richly textured, organic sound, but one that remains rooted in sequencing and electronica. But after From Here We Go Sublime’s salivating critical reception, has pressure for a follow-up changed his creative approach?

“Everything’s totally different right now,” he agrees. “Before, I was mostly making music for myself. It was fun, without any expectations or pressure. I still do of course, and it still is, of course, but for the first time in my life I got exposed to touring constantly, more or less, for a year. That stilts a lot of creativity. So it was very hard to get started (on the follow-up).”

We’re sitting in a yard in London’s Hoxton, sipping beers, for a quick chat between soundchecks. Willner is a shy, softly spoken presence. He tells me he doesn’t write on the road. “The (creative) process is pretty simple; me sitting in the studio. I’m a pretty fast worker when I have a feeling to make something, but when I don’t it can take forever. I can’t just sit down and try to write,” he continues, frankly admitting that he’s not a very disciplined person. “I have to be in a certain state of mind. People try to put deadlines on me but…” he tails off, shrugging.

He has a studio at home, but he’s just moved to Berlin – following in the footsteps of fellow Stockholmer Olof Dreijer, of The Knife, albeit with a detour via Cologne. But while Dreijer headed to Berlin for artistic reasons, Willner is candid about his own. “I fell in love,” he smiles.

Both of The Field’s albums call to mind a rich array of early ’90s sounds, both for the Slowdive-like narcosis of their blissed-out vibe and the huge sound of My Bloody Valentine, and for their instrumental make-up that owes much to the dance music of the time. Slowdive’s music was aided and abetted to a degree by their choice of narcotics, and there’s been speculation as to which substances Willner uses to create his particular catatonia. “Alcohol,” he says, sipping his beer. “So many people think it’s so spaced out and on drugs, but it’s alcohol.”

“We have one foot in the techno tradition and one foot in… I dunno, something else.” – Axel Willner

He remains a big fan of the UK shoegaze scene, but suggests it did not begin and end in the early ’90s. “I don’t know why Seafood isn’t mentioned,” he says, referencing press comparisons between his music and that of ‘the scene that celebrates itself’. “I think they’re probably one of the most important UK acts for me,” he continues. The Cooking Vinyl-signed band only emerged in 1996.

Willner’s recording technique has attracted much geek interest. He uses, as he puts it, “a half-finished program created by a Finnish guy that’s now (formed) a pretty huge community”. It’s a tracker program called Jeskola Buzz. But he didn’t go down that route to be different from everyone using Logic, ProTools or CuBase. “I used it because I knew it. I found things that I liked that these other super-developed programs don’t really have, or that don’t really fit me.”

Beyond the lonely studio environment his music making methods now involve other humans, this time including a collaboration with Battles drummer John Stanier on the title track as well as the two band members. “The creative process is still mostly me, but the guys who were playing with me last year are still playing with me, and we liked how the acoustic elements developed,” he explains. Yesterday And Today derived from From Here We Go Sublime’s live shows, the live process affecting and altering the methodology of his recording process.

But isolation is still necessary for the generation of ideas. He recorded Yesterday And Today on what he describes as “a remote island” 90 minutes’ ferry ride from Stockholm. “It wasn’t that easy to come to it. There are only a few residents and it’s farms, with a few horses.” He was on the island without a car – he doesn’t have a driving license anyway – and with bad phone reception.

Yesterday And Today finds space for The Field’s cover of The Korgis‘ Everybody’s Got To Learn Sometimes, a track previously covered by Yazz, Erasure, Zucchero and Mark et Claude. Willner first heard it performed by Beck, however, in the Eternal Sunshine Of The Spotless Mind soundtrack. He likes soundtracks; of all the music he could be into, he rates the music from John Carpenter’s film Escape From New York just now. And what else? “Super happy music,” he smiles. “’80s pop. I listen to so many different kinds of music.”

All these eclectic influences have added up to a unique sound. I ask Willner how he’d describe it. “We have one foot in the techno tradition and one foot in… I dunno, something else. People have so many different opinions about it.”

The Field play Bestival on 13 September 2009 and tour the UK in November, including London’s Luminaire on 17 November. The album Yesterday And Today is out now through Kompakt.