The Frank And Walters’ Paul Linehan: “It’s all part of reaching out to people so you feel less alone yourself” – Interview 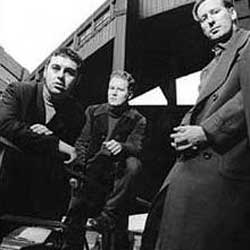 The Frank and Walters

The Frank and Walters are, at the time of writing, indulging in a promotional tour for current album Beauty Becomes More Than Life, taking in the UK, the USA, Ireland and continental Europe. It is their biggest push for success since they were in the Top 20 of the singles chart and were supported by Radiohead and Suede.

But some things never change. A battered Mercedes van serves as a tour bus. The only luxury is a ‘phone.

Vocalist and bassist Paul Linehan is in the driver’s seat and he’s started the engine. “I can’t drive!” announces the man with the famous basin haircut in a nervous Cork accent. I’m wondering where he plans to drive us to with no driving license and start to look around for a seatbelt. Soon it becomes clear, after much twiddling of knobs, that he’s trying to turn the heater on. The noise and my dictaphone don’t get on too well, so it is agreed that we should freeze for a few moments.

The Dictaphone’s on, a start needs to be made. So, how is it that a band that was supported by such giants as Suede and Radiohead remains largely unknown still? Paul has a theory.

“I think in 1993 we shot ourselves in the foot. We used to dress in a wacky kinda way and we didn’t really take the music business seriously. We always took our songs seriously, but we didn’t realise what we were doing at the time. It left some of the music business thinking that we were just a novelty band, so when we came back with Grand Parade (their second album), those people didn’t give that album a proper listen; they thought it’d be another novelty record – and the first album wasn’t even!

“There are two obvious singles on Grand Parade that should have been in the top 10 – How Can I Exist and Colours should’ve made it, they were not only pop but had some depth as well. We were in the wrong place at the wrong time.”

The Franks found a following in the USA with Grand Parade though. “The album was ignored by the press in England but it was received very well in America. We hadn’t been to America with Trains, Boats and Planes (their first album) and funny clothes, so people didn’t think of us as a novelty band there. They had a very unbiased look at our music, so it was totally critically acclaimed there. It was a brilliant album.”

T’wasn’t always thus; Trains, Boats and Planes was thought highly of in England even by NME and Melody Maker, those bastions of vitriol, and Paul is delighted that the most recent album is getting good reviews again. “Maybe they’ve had a chance to listen to Grand Parade by accident or something and they’ve finally realised that we’re not a novelty band, that we’ve got a lot of depth.”

This depth is particularly apparent on the Rob Kirwan-produced Beauty Becomes More Than Life, an album with which The Franks have changed their musical style quite dramatically. They’d previously been about guitars – increasingly synths are finding their way into their music.

“We got a bit bored by the guitar…” – Paul Linehan

“Rob is very much into dance, so anything that’s dancey on the album, that’s bass and drums, was his influence, but we put the keyboards on because we wanted to experiment. We didn’t want to make another Grand Parade album, which was guitars-driven, so we embraced technology for the new one.”

Where will this embracing end? Decks?

“I haven’t got around to decks yet,” says Paul, as far as one can tell entirely seriously, “but you never know; if I met some fella who showed me how to do it, like, then yeah. We’re making another album at the moment that’s a lot more electro.”

Rumours were circulating recently of The High Llamas‘ Sean O’Hagan producing the new Franks album, surely sending The Franks into electronica well and truly, but the suggestion seems to ruffle Paul; he claims he’s none the wiser about that. “I like his work though,” he adds, “I think The High Llamas are brilliant.”

It is fact that if such a thing as Britpop ever existed then it is well and truly a dead concept now, all the guitar bands involved lining up to reinvent themselves in one way or another. Is the guitar band dead? Paul doesn’t know, and for him The Franks’ move away from guitars is entirely coincidental to such a general shift in the indie scene. “For us, we got a bit bored by the guitar, so the next album was likely to be music by numbers for us; it would be like arrested development. So we kinda had to move on and experiment with synths and effects.”

Fans shouldn’t worry though. “Once we’ve been down this avenue for awhile we might resort back to the guitar, and love the guitar.”

Paul sees no disadvantage in just being a guitar band and thinks that it is no more difficult to break through with just guitars now than it ever has been. “If you look at Travis, they’re a very guitar-based band. I hear just guitars on their songs, and they’ve got through. I suppose a lot of success is down to luck, doing the right thing at the right time.” The rest of the time, of course, you can be on a hiding to nothing. I’m curious to know why such a gentleman as Paul is in the cut-throat music industry at all.

“It’s about expressing ourselves. We’d probably get more money from being on the dole than we would being in a band!” – he descends into giggles – “It’s our dream. My personal ambition,” – back to serious face again – “is to write a unique album, one that’s ground-breaking, that’ll mean something to someone out there, and to express myself. It’s all part of reaching out to people so you feel less alone yourself.”

“We’d get more money being on the dole than we would being in a band!” – Paul Linehan

High principles indeed. This fundamental human longing, a desire to connect, is the backbone to The Franks’ music. But there’s more… “Without wishing to sound pretentious, I do believe in art and I do believe that music is a medium for art and it’s the only way to bridge the gap between yourself and everyone around you, reach out using music as a language. When someone comes up to you and says that they feel the same way about something it brings you closer, you feel less isolated.” All this is spoken softly, seriously, all words beginning with ‘th’ lose their ‘h’. Paul Linehan is really very endearing.

Beauty Becomes More Than Life, it seemed to me, was about love and someone who was endearing to him. “Yeah,” says the album’s principal architect, “half of the album is falling out of love and the other half is falling in love. ‘Until The End’ is about being in love, commitment, Take Me Through This Life, Simple Times and Castaway too. Songs like Today and Time We Said Goodnight are about falling out of love.”

I wanted to know how one goes about writing an album like that. Paul answers in practical terms. “I write the chord progressions and the melody, Ashley (the drummer) and myself do the lyrics, Niall adds his riffs and counter-melodies.”

Having released the album, the first high-profile gig to promote it in the UK was at London’s Borderline in September. It was a truly remarkable experience. “That was one of our best gigs ever,” affirms Paul, “I enjoyed it so much, because that day I had a migraine and I felt absolutely terrible. I took some tablets and by about six o’clock I felt better, and then I felt good to be feeling well – I was on great form.”

At one stage, we in the front row were yelling at Paul to stop the gig while a girl floundered about on the floor looking for her AWOL glasses. Paul laughs at the memory.

“The Frank and Walters’ fans are caring, concerned people. When they asked me to stop singing I thought someone had died, but when I found out that it was about someone’s glasses, like, it showed the kind of fans we have, and that’s grand. Franks fans are gentle, caring people.”

And they are increasing in numbers. “Our fans are very loyal. But at The Borderline there were people who were too young to be there first time around, unless they were 2!”

So how long do we wait on the next album to quench the thirst of the new following?

“Not long. We’ve demoed six songs already. We’ve worked out the direction of it. I’ve got hundreds of songs written, with half the lyrics. I just give Ashley a shout and we’d go in and finish the other half. I play them to Rob and the lads and they’d say they like this one or this one, then we’d go and record them.”

On the night of this interview, Islington gets to hear a set of The Franks’ songs, then it is America’s turn. Right now though Paul has to “chill out” and prepare himself for the forthcoming gig, so I leave The Franks’ tour van and return to The Garage to find it absolutely packed, just as The Borderline was. Some may dismiss this band as forgotten indie heroes, but they’re wrong. Don’t write off The Franks just yet.

The Frank and Walters’ album Beauty Becomes More Than Life is out now through Setanta.