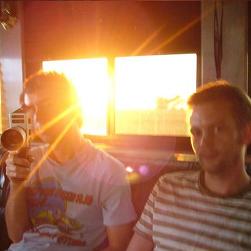 Despite accusations of redundancy The Go! Team still don’t sound like many other bands. The Brighton collective scaled a tremendous amount of hype back in 2004, only to sink back to Earth as more traditional rock bands out did them in terms of long-lasting reverence.

They’re still a heap of fun though, and their best songs can sweep the world up in the joyous exaltation that led to all the excitement around them in the first place. You may pretend to be above The Go! Team’s kitschy glee, but our muscles are biologically programmed to move to their music.

We recently caught up with bandleader Ian Parton, and talked about his band, where he sees it going, advertisements and documentary films.

So when you started The Go! Team, did you expect to have three albums out?

I didn’t expect to have one album out, really you got to take it one step at time, I mean when we first started the idea of having a single out was far off and the idea of having an album was just hilarious. And the reception from the first album was unexpected as well. But I still don’t think we’ve nailed it, we’ve yet to nail the potential. It’s a perpetual songwriting thing for me, I’m never completely happy.

You said you never nailed it, do you think you’re closer with Rolling Blackouts?

I think its closer to classic songwriting, I mean the original idea I had for the record was pretty schizo, I wanted it to sound like changing channels on a radio. But it turned out to be a lot more traditional, very melodic, because really I think a song should be driven by melody. It should just guide you and reveal its personality. Whenever I hear a melody I think in visual ways; imagining a brass band or a desert or a chase – I’m constantly trying to think of what world the songs exist in.

You mentioned brass ensembles, and for this record you used the real thing, be it orchestras or choirs instead of a synthesizer, why is that?

I just find it liberating, I wouldn’t feel comfortable using a brass-sounding keyboard. I’ve always had a love for brass, I think its underused – possibly because it’s a pain in the ass or that it doesn’t look really cool – honestly I think the ’80s and Phil Collins might’ve given it a bad name. So I guess I’m trying to reclaim it on the lines of Public Enemy and how they made brass much tougher.

Yeah, that’s partly why I use school children because I think they give off more energy, some of them are out of tune, and it actually sounds more effective when someone in screwing up.

You said that you guys didn’t feel as pressured with Rolling Blackouts as with Proof of Youth, how did that impact the sessions?

Well there wasn’t really any time issues… but there’s always pressure with songwriting but I totally factored it out, I was just in the realm of melody, I was just going off instincts. I wasn’t worried about the critics or reinventing ourselves, I was just writing songs.

You said one of the reasons Rolling Blackouts was delayed was because of the touring you were doing, do you prefer to be in the studio or on the road?

I like both to be honest, they’re totally unrelated in a way. To me it’s just about jumping around, in the studio it’s more about the release of everything you’ve been working on and the more philosophical side of examining what you’ve written. On the stage that perfectionist demeanor goes away and we just go for it.

That sort of connects back to what you were saying about the children’s choir.

Yeah I think so, on stage we’ve always tried to just go crazy, even if it’s in front of 30,000 or 50. And that’s largely to with Ninja, she’s a bit of a nutter and that keeps things energetic on stage.

You do seem to have a lot of fun on stage.

Yeah, we’re all coming at it from different angles as well, we all see The Go! Team a little differently, for me it’s all about the noise we’re generating and how powerful the drums are. But with Ninja she’s more concerned about dancing – but not in a choreographed way – she’s always said she pretends like she’s in her bedroom.

One of the other things that happened during the recording was you having a child, did you find any inspiration in that?

I wouldn’t say inspiration really, because then you get into that sort of “isn’t he wonderful? Isn’t he lovely?” kind of thing. I wouldn’t dedicate a song to him or anything, but it does effect pacing and scheduling. But I don’t think it impacts the music, he does recognize the songs when they come on the radio, and he’s only 2. It’s pretty weird; he’s got like a sixth sense.

Your songs have appeared in a lot of advertisements, but not many people seem to know that The Go! Team are the band responsible for them, does that annoy you at all?

I should say I’ve turned down a lot of adverts, I recently agreed to that NFL one because it was a pretty cool advert. It’s the one where they’re on the bus with headphones on, wigging out to The Go! Team and it was an anti-obesity thing which I thought was right on. And I thought it was funny because I’ve never done any sport ever throughout my life. But I have turned down quite a few advertisements, I’m very anti-advert in general but I suppose I had to mellow out recently. And the video game thing is cool, we’ve become known as “theme from littlebigplanet,” I think games are cool although I don’t play them myself. We’ve been in a few movies, we were in Whip It, and the idea of being in a movie is good. But I don’t want to become known through advertisements, we’ve had some offers over the years that are just cringe-inducing, and I don’t want to become known through bullshit adverts. I turned down a health insurance advert, mainly because of Michael Moore’s Sicko, and these guys were like the fucking main culprits so I thought ‘no way.’ It’s kinda thankless because people don’t know the ones you turn down. But yeah, we’ve done a few.

Do you think maybe your music is the reason you get so many offers?

I realized early on that our music would get offers because of its positivity, and I knew as soon as that was hijacked by a product it would ruin the whole thing.

You put a Coke label on top of a Go! Team song and it changes its face.

That’s why I’m so hot on not doing ads; there’s been quite a few cases with sound-alikes too which is something I have no control over – because in the end everyone is selling the concept of happiness. And that’s why I’ve always been iffy about it.

Three albums in, and a fair amount of acclaim, do you see yourself manning The Go! Team 10 years from now?

No not really, there’s talk going around right now that this might be our last year. It might well be, unless we get together in some reunion.

What do you see yourself doing?

Well I used to make documentaries, but I think I’ve done the world better with music than some shit discovery channel movie about people getting murdered in their sleep. I think music is a lot purer, you have a lot more control of it, you have a direct vision – TV is pretty nasty business, executives want you to dumb down everything. I’d try to resist going back into TV if I could.

I just saw the Anvil one, I don’t know if it’s my favorite but it was good. It’s funny how documentaries claim to be about one thing but end up being about so much more, that one was asking the question why you put up with so much shit for the art.

Questions were posed by Luke Winkie.