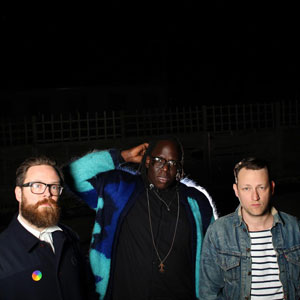 It is a rare occurrence for an interviewee to have, only weeks prior to the conversation, escaped from the very brink of death. All things considered, The Invisibles singer and guitarist Dave Okumu (who recently suffered a serious electric shock onstage in Nigeria) sounds alert, bright and positive. “Things are going remarkably well,” he says, “almost miraculously well in fact. Just to be here feels amazing – it was a very close shave. It was so horrific and traumatic for everybody. My leg is broken in two places but that really feels like getting off lightly. It could have been so much worse. In a strange way, I feel like a better person for it.” It really sounds as if this freak, terrifying accident has been something of a transformative experience for Okumu. “I was watching an amazing interview with Maya Angelou the other day – shes such a remarkable person. She talks very clearly about the transcendence of suffering as a way of understanding ourselves. These things can destroy you or you can find some sort of redemption within them.”

In addition to its physical and mental effect on Okumu himself, what impact did the accident have on the band? In response to this, it would be easy to expect a list of unfortunate events – cancelled shows, loss of income, the inability to promote a just-released album that also happens to be a near-masterpiece – but Okumu is more sanguine, reflective and philosophical. “Its really reaffirmed the bond between Tom, Leo and me. Thats made us better people. We understand how much we care about each other. Its unfortunate that suffering highlights these things but I think its pretty much hardwired into humanity. All the relationships and connections in my life have been accentuated by this. Everyones support has been an incredibly valuable thing.”

Relationships appear to be of fundamental importance to Okumu. “Ive always felt that relationships are everything from a young age. Thats what makes life worth living. Ive also always been interested in the dynamics of relationships within music.” This notion is evidenced strongly in Rispah, the bands second album, which feels a good deal more empathetic and fluid than its predecessor. “That was at the forefront of our mind. We wanted to make something that represented the band. When we made the first record, we werent really a band as such, but we became one through the process of recording and touring it.” Yet the new album also maintains the bands intelligent, artistic use of the studio. “Theres definitely a balance to be struck between letting the sound of the band come through and our love for detail, layers and textures. This record feels really good because I think weve struck that right balance.”

The album, much like Okumus newfound sense of serenity, was borne from trauma and tragedy. During the process of making the record, Okumus mother, by his own description the most important presence in his life, died. “We were deep into the process when my Mum passed away,” Okumu explains. “Some of the lyrics were finished but there was a sense of it being very fluid and nebulous. Your job as its author is to try and recognise when it is complete. But when my Mum died, there was a complete cut-off.” Clearly, Okumu means this personally as much as in terms of his work. “Its often said that your life has two halves and that theres usually a traumatic event to mark the transition. The second half is about recontextualising the first half. When my Mum died, everything started again and I had to recalibrate and rediscover.”

“It could have been so much worse. In a strange way, I feel like a better person for it.” – The Invisible’s Dave Okumu on being elecrocuted

This experience, it seemed, went well beyond anything Okumu could have predicted. “I just completely disconnected from music – I could neither listen to it nor play.” This sounds like the worst possible thing a musician could feel. “Well, a kind of survival mechanism kicks in and you do what you need to do, you allow things to happen and try to make sense of them.” Okumu talks about a strange state of self-observation. “There was a part of me detached from myself and watching myself – a bit like CCTV. I felt very present within myself. That came to be through committing to grieving. I had a real fear of grief – did I even know what it was?” Grief is one of the hardest things for anyone to go through – many people just try to carry on as normal and cast it aside. “Ive seen a lot of people who have avoided grief. I had this preconception that grief was something really grim, but actually it was the most natural response. It was an act of love, it wasnt exclusively about pain and loss. It was the only thing I wanted to do – the only way of honouring her and myself. It created a heightened state of awareness – a state of grace.”

That sense of awareness certainly comes through on Rispah, which is a nuanced, thoughtful, intensely personal record. Recordings of traditional Kenyan ritual singing at Okumus mothers funeral occasional punctuate the proceedings, and Okumus mother even gives the album its name. Its not the most immediate of recordings, instead demanding a good deal of patience and attention from its audience. Is Dave concerned as to how the songs will be interpreted by others? “When youre sharing what you make, youve got to let go. If you make it public, theres a sense in which its no longer yours. Am I alright with that because its such a personal thing? Thats a really important thing to come to terms with!”

In addition to the personal upheaval Okumu experienced and the role it played in shaping Rispahs atmosphere and tone, there have been other important transitions too – the band making a move from Matthew Herberts Accidental label to Ninja Tune. “Working with Matthew was quite appropriate for that time. We wouldnt exist in this form if he hadnt given us that opportunity. His label is a tiny and beautiful thing but we did outgrow it.”

Not only this, but the band also worked with a different producer. “We had to think about the next stage – we were growing both in terms of our independence and in terms of clarity in what we wanted to do. This music only really works if we do it on our own terms. We started making the record ourselves, whilst continuing to tour but this was quite fragmented and challenging to sustain. We got to the point where we thought it would be great to have a producer – someone who could make it more efficient and structured. Out of left field came our good friend Rick File – weve known him for a number of years and we contributed to an album he made under the name We Fell To Earth. We thought of him more as an artist than a producer, but hed been getting much more into the production side of things. He was very well placed to work with us – our needs are quite specific and any producer needs to understand the band dynamic. He would give us the space we need to take control but also put his foot down when it was necessary.” After talking so much about tragedy and upheaval, its great to hear Dave explain that the recording process was actually supremely enjoyable. “It may not come across to many people,” he says, “but this record was such fun to make. It was such a joy!”

The Invisible are also a band that face pretty significant scheduling and organisational challenges, given the busy lives of all three musicians. Drummer Leo Taylor plays on Adeles world-conquering 21 album and has also played and toured with Hot Chip. Tom Herbert is an articulate and powerful jazz bassist, and works regularly with Sebastian Rochfords acclaimed contemporary jazz ensemble Polar Bear. Even Okumu himself has veered beyond his comfort zone, working as a producer for part of the forthcoming album from Jessie Ware. How on earth do they find the time? “Its taken us a while to balance these things,” Dave explains. “Were proud of our involvement in different projects. Historically, so much great music has come from that openness. People I admire have that outlook and its absolutely in our DNA. It has required a change in priorities, though. I want to do so much that sometimes I have to make tough decisions. Ive had to start saying no to lots of things in order for our own thing to flourish. We no longer fit this into the cracks between other projects – its now the other way around.”

Does Okumu ever get time just to relax? “I need to remember to take time off,” he half jokes. “I guess this has something that has just been forced on me. This is what it feels like to stay in just one place for an extended period of time!” Given the justified acclaim and attention meted out to Rispah, things are sure to get a whole lot busier once again following the enforced convalescence. Theres a strong sense that there is an awful lot for Okumu still to do. He is, after all, a survivor.

The Invisible’s album Rispah is out now through Ninja Tune.

The Invisible MP3s or CDs

The Invisible on Spotify