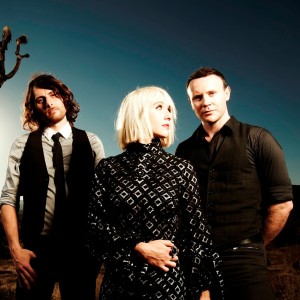 On the day that we call Rhydian Dafydd, bass player and co-songwriter with Welsh trio The Joy Formidable, they have just arrived in Manchester for the final night of their support slot with Muse.

It is a sign of just how far the band have travelled from the slog of years of countless shows up and down Britain – building an incredibly loyal fanbase in the process – to playing the biggest arenas in the country with some of the world’s biggest rock bands.

They are certainly not daunted by playing alongside a band with the theatricality and expanse of Muse. They are equally adept in vast arenas or shoebox sized clubs. “We approach it the same. A gig is a gig. You have to be committed to everything,” explains Rhydian. “Obviously when you’re playing to your own crowd, people that have really invested in your music, nothing really beats that. Having said that, it’s a challenge playing to utterly new audiences. We’ve really been enjoying it.”

These are exciting times for The Joy Formidable. The band have just released their second album, Wolf’s Law, which represents a significant leap forward from 2010’s debut effort The Big Roar. With the recording completed last summer, the band have had a little time to reflect on what they have just created before the world hears it. The overriding emotion seems to be a sense of contentment  “I think the main thing is that we’re very proud of it. It always has to be that way for us. No regrets. We have to be creatively fulfilled by what we’ve done.” There is no fear or trepidation ahead of the album’s release. “Everything else is out of your control,” says Dafydd. “You’ve just got to stand behind the piece that you’ve written and we utterly do.”

There is a real assurance about Dafydd’s answers that suggest the band is incredibly focused on what they are doing. Wolf’s Law is exactly the album they wanted to make.

“There’s a lot of breadth on the album, it’s very intricate,” he offers. “There’s a lot of dynamic going from really heavy tracks to really delicate moments. It feels like a real growth from the first album but still with the same voice. It’s not contrived.”

That voice is one that is singularly created by the band themselves. The Joy Formidable are a very tight and insular outfit. While they were recording the album, they isolated themselves away in Portland, Maine intent on creating a record that both defined the band and themselves as people. The songwriting focuses on the central core of Daffyd and singer and guitarist Ritzy Bryan. From primitive beginnings, the songs grow to sometimes enormous proportions. Like their debut, Wolf’s Law was produced by the band on their own. This time though there is one significant difference, the addition of legendary engineer Andy Wallace on mixing duty. Dafydd is effusive in his praise for Wallace and his part in honing their sound. “He’s at the top of his game,” he says. “I’m a massive fan of his mixes and I have been for years and years. Particularly his work with Jeff Buckley, Rage Against The Machine and Slayer. He’s always got a really good drum sound. We’re really picky when it comes to that so he was a perfect guy.”

When we ask him about their initial ambitions for the album, Dafydd stresses how important it is to not have any preconceived notions about what you want to achieve with the album. “I think it’s important to let it evolve naturally. You just have to get your inspirations out when and if you feel them. That’s the truer creative process for us and that’s exactly what we did.”

Wolf’s Law is something of an enigmatic album title. As Dafydd explains, the title is something of a reaction to the debut and is central to the overall themes of the record. “The Big Roar felt like a very frustrated and claustrophobic record. We recorded it in our bedrooms and it was very scatty and very tight. On the first album, Ritzy especially was going through some difficult periods. There were all manner of hard times.” The recording of the album was entirely different. “With this album we had some time to actually focus out ideas and grow as people.” Dafydd goes on to explain the origins of the title and how it relates to the record. “First and foremost, Wolf’s Law is a medical term that relates to healing. How your body reacts to stress.”

The Joy Formidable have taken that theory developed by 19th century German anatomist and surgeon Julius Wolff and adapted it to their album. It has become something of a mantra. “For us, it’s something bigger than that”, says Dafydd. “It’s symbolic of reconnecting with ourselves and with nature – finding solace again. It’s done in a focused way – it’s still aggressive and the voice is the same. It’s multi-tiered. We’ve been reading a lot of Native American mythology. We were fascinated by some of the travels we’ve done just prior to the album in places like Monument Valley.”

The fascinations with mythology and, particularly landscapes and the elements are a common theme of the album. Lead single Cholla is a buzz saw sharp rock song that is all about a cactus and its symbolic connotations. Not your usual lyrical fare for a British rock band. The band were compelled to write after experiencing some of these cultures and ideas.

The first anybody heard of the band’s new material was with the teaser video for the song Wolf’s Law. Interestingly, this is a song that does not appear on the album. Its video – with its strong imagery of vast landscapes and natural images – is strongly linked with the themes of the album though. Dafydd stresses that this was not intended to be a single. “That was essentially an art piece. We wanted to put a visual out there that would set the tone for what’s to come. It’s quite funny how people thought that it was the first single back. It’s nice to play with people a little bit.”

Listening to the album, you get the distinct impression of the boundless ambition coursing through the band. It is a far more ambitious and dextrous work. As Dafydd explains the band were intent on pushing as many boundaries and conventions as they could. “We scored for the first time on this record with orchestral sounds and string sections. We’re excited by the writing and composing and challenging ourselves about what is this idea of being in a guitar band. Anything is possible.”

Another key track in understanding the stories and ideas behind Wolf’s Law is the staggeringly powerful, stirring grandeur of The Leopard And The Lung. It is a song indicative of the band’s passion. “I think we always write from the heart and every word means something”, says Dafydd. “That song talks about Wangari Maathai, who was a Kenyan environmentalist who brought a lot of awareness to women in Kenya during a very difficult period. Again, these themes of nature come to the forefront.” The admiration in his voice is palpable as he talks about Maathai. “She was always trying to raise awareness for the natural landscape in Kenya. She saw the trees as the lungs of the earth. We were really blown away by her story.” He sees parallels between the strong redoubtable character of Maathai and the band itself. “That tied in with the voice of the band, which is intensity. I don’t think it always has to be a massive sound or sense of grandeur but there does have to be an intensity in the message. Passion and soul for what you’re doing, that goes through all our material.”

Throughout our conversation, talk repeatedly turns to the strong relationship formed between the band and their fans. It is a relationship forged over years. Unlike many new bands, The Joy Formidable’s success has come after years of toil and numerous setbacks. “It’s a real honest community vibe”, exclaims Dafydd. “We’re absolutely appreciative of how much people have invested in us. I think it’s really important to give back and make people feel appreciated. We’re not interested in being ant kind of flavour of the month, we’re interested in permanence. We’re interested in being great and classic, writers that will stand the test of time, the fans really get that.”

Dafydd has a certain degree of sympathy for emerging new bands that are thrust into the spotlight. “It comes down to every decision you make, not just your writing. I think how you hold yourself, your appreciation of the people who ultimately pay your way and come to your shows is important. For some bands, they don’t go through that. They get thrown into the limelight and haven’t built up a fan base as such. If you haven’t been through that, you don’t really appreciate why you’re there in the first place. That hasn’t been the case with this band. We’ve built it up in what I think is the right way.”

The strong relationship between the band and their fans is something that drives them on. “I always wanted being in a band to be a two-way thing. There are a lot of artists that get up on stage and there’s almost a barrier between them and the audience, they’re just spectators. I think that it should be a conversation and you should be learning from each other and getting involved. I love that aspect of music.”

There have been rumblings that 2013 is set to see something of a resurgence of UK guitar music. Dafydd bristles ever so slightly though at the suggestion that The Joy Formidable can be pigeonholed as simply a guitar band or a rock band. “We’re not interested in finding a formula and replicating it. It’s fucking boring. There’s elements of this band that are heavy as hell but also there are delicate piano sounds and jazz influences. It’s important to try to break down those barriers. The main thing is that you stick to your guns and know what kind of band you want to be instead of just trying to fit into anything.”

The Joy Formidable’s Wolf’s Law is available now through Atlantic.

The Joy Formidable MP3s or CDs

The Joy Formidable on Spotify