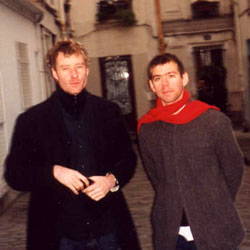 The National take brotherly love to new levels. Not one but two sets of siblings make up four fifths of the New York band, augmented by vocalist Matt Berninger.

On the back of third album Alligator musicOMH caught up with a Dessner brother, Aaron, as The National ended an exhausting world tour that’s seen the band’s profile raised across Europe.

So a swift whisky or three would be well deserved, then…

Touring the UK is starting to catch up with The National guitarist Aaron Dessner. It’s the band’s last full day of a demanding programme, and he’s admitting to having had “a little too much whisky” last night, the first of two sell out affairs at London’s 100 Club, also caught by musicOMH.

He talks of the venue as “great, but is took us a little while to get used to how they have the stage there. By half way through the gig, though, everything was fine and we felt more relaxed.” These two slots bring down the curtain on a five week tour, with just a couple of radio shows before their long awaited return to New York.

“We’ve toured Europe maybe three times before” says Aaron, “but this time it’s been bigger, everywhere’s been sold out or almost sold out. We’ve reached a wider audience this time around and we’ve done a lot more promo stuff too. It’s not just the UK either, we seem to be a lot bigger in France, Germany, Spain and Belgium too.”

“We’re not alcoholics, but alcohol does play a part in our music…”
– Aaron Dessler explains the plus side of being under the influence…

As intimated in musicOMH’s album review, The National sound includes arrangements of such an intricate nature, and I’m interested to know how these songs are reproduced on stage. “There’s a lot more energy live, a lot of strings and piano and maybe less of, say, the clarinet lines, but we try and include as much as possible. Although I write a lot of the music we collaborate with Pad (Padma Newsome), an Australian composer who’s basically in the band, and tours with us playing viola and piano. We take a lot of care over our arrangements.”

And what of the words? Are they all from personal experience? “Matt (Berninger) writes all the words, and he takes a lot of care to be not overly literate but to leave a lot open to interpretation. There are personal things, surreal fantasies, and he likes to write about human weaknesses, using lines stolen from conversations or character studies – there’s some desperate but beautiful people on the album. He’s got a lot out of his system writing it!”

Of the more than occasional references to alcohol, Aaron refutes suggestions of too much excess, declaring, “Well, we can safely say we’re not alcoholics, but alcohol does play a part in our music, it’s a kind of euphoric mix of whisky and adrenalin. Maybe some of it was recorded when we were drunk, which is why it sounds a bit off kilter!”

Regarding the group’s approach to recording, Aaron demonstrates the insight that informs their musical arrangements: “My brother and me play guitar, and I write the finger patterns all over the album, with Bryan Devendorf drumming all around them – it’s an urgent drum sound. To get everything the way we wanted it we used a really old one-inch tape machine, we didn’t want a studio sound. That means the album is just the sound of a band in the studio, nothing more – we didn’t want the velvet box’ sound.”

As the band were completing the record in their native Ohio, George Bush was returned for his second term in office, a period Aaron recalls vividly. “Although we all live in New York we’re from Cincinatti originally, and I voted absentee in Ohio as I have a driver’s license there. Frankly it was a very difficult time. In fact the song Mr November is partly about John Kerry, part Matt – the anxiety and pressure leading up to the election and also the end of the album.”

The guitarist remains baffled at the outcome. “It was so hard, we couldn’t work for a couple of days as we were too depressed. It turned out the economic and cultural areas all went for Kerry, and the Bible belts for Bush. It’s amazing looking at the political map now, with blue all around the edges and red through the middle.”

Aaron’s mood cheers when attention switches to his flight home. “We’re all knackered at the end of a long tour” he says. “It’s been great, and we’re all looking forward to tonight, but on the other hand we can’t wait to finish.” Some eight hours later it’s hard to tell the band are fatigued, such is the intensity of their performance. As far as this tour’s concerned, it’s most definitely job done.