The National: “We were searching for something that was more transportive” – Interview 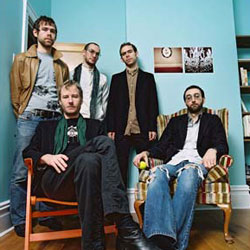 The National are in town to promote Boxer, their long awaited successor to their breakthrough album Alligator. musicOMH caught up with the band for the first time in two years at the end of a long, hard day promoting and asked, “What took you so long?”

The guys look knackered. Slumped on a sofa Matt Berninger, lyricist and lead singer, and Aaron Dessner, guitarist and bassist, with The National are near the end of the first of two days of back-to-back media interviews.

They flew in on the red-eye from New York that morning and by the time I walk into the room at half five have the hunted look the terminally exhausted acquire when their brains are worn out by too many questions.

It is the downside of being The Next Big Thing – and when you have The Sun chasing you for an interview, you know that you have finally earned that accolade. “Take as long as you need, we’re in no hurry,” Berninger says graciously.

“No hurry” seems to be the band’s motto. Their triumphant third album, Alligator, was a word-of-mouth hit, tearing through the consciousness of listeners and consolidating their reputation as one of the most exciting new bands around. Lyrically dextrous and musically accomplished, they have been compared to everyone from the Tindersticks and Nick Cave to The Smiths and The Pixies.

The new album Boxer has been a long time coming. Why the wait?

“It takes us a long time to write songs that we like,” Berninger explains. “We don’t just get together and crank out songs. It is a pretty slow process.” Delays were caused by a punishing tour schedule, with the band crisscrossing the Atlantic several times and playing to packed audiences in increasingly larger venues.

The popularity of the live shows is why they sold out so fast when the new tour was announced. “Playing live is exhilarating but very stressful,” Berninger adds. Anyone who has seen his intense performance will understand why. It’s like gestalt therapy: no one leaves unscathed including the band it seems. “We needed to convalesce,” Dessner chips in. “What was very frightening and difficult for us after all that time on the road was wondering if we could again make songs we felt as excited about as we had before.”

They need not have worried. Subtler and less paranoid than the frighteningly accomplished Alligator, Boxer lacks the harsh edginess of songs like Lit Up and Friends of Mine. Its politics has also moved on from the polemic of Mr November to the reflective observations of Fake Empire and mesmerising Squalor Victoria. All together the album has an emotional resonance and maturity that shows a band at the height of their creative powers.

“At certain points during the recording and writing of this one, we realised it was going to be very different from Alligator,” Berninger says. He admits a “fleeting anxiety” that the difference may disappoint fans hoping for more of the same, but adds defiantly: “We would never be able to operate that way. Even if we tried we wouldn’t be able to channel songs that would meet people’s expectations.”

As Dessner describes it, writing is a laborious collaborative process in which he, brother Bryce (guitar) and brothers Bryan (drums) and Scott (guitar, bass) Devendorf, trade tapes with each other, musical thumbnails that each works on until all are happy. “We pass them back and forth and then we get together and start to shape it, seeing what has an energy,” he explains.

“I spend more time trying to avoid bad lyrics. So often things that I think sounds like a great lyric, I write down and put a star next to it and think, ‘Oh my god, that is going to kick ass somewhere.’ But no matter how you come to it, it sounds like an all caps Song Lyric.” – Matt Berninger

“With this album a lot of what I was doing and that rubbed off on my brother was meditative, hypnotic and rhythmic playing that subtly pulls you in and along,” he adds. “It is a lot less desperate and fierce than Alligator. It is more elegant. We were searching for something that was more transportive and less angry.”

Whether the album has transported Dessner remains to be seen: he hasn’t listened to it yet. “I still haven’t gotten to the point when I have actually listened to it,” he confesses, looking sheepish. “It’s not because I don’t love it, but it was very hard to make and it took every ounce of energy.” “Aaron” – Berninger interrupts in his best infomercial voice – “you’ve really got to check out the new National record.”

Berninger’s approach to his lyrics is equally labour intensive – behind Boxer are 50 discarded song sketches that he felt “just rang false” when it came to the cut. It’s a surprising admission: one thing that marks out The National is their easy on the ear, stream-of-conscious lyrics, which flit naturally from grand emotion to commonplace observation.

“It is definitely not stream of consciousness,” he explains with emphasis. The illusion is deliberate. “If it feels like there is not effort involved, I know a lyric is close to being finished, but it takes me forever to find the right lyric for a song. It is a collageing process, putting pieces together. Sometimes it is really frustrating and I kind of lose my mind a little bit and get pretty critical.

“We needed to convalesce. What was very frightening and difficult for us after all that time on the road was wondering if we could again make songs we felt as excited about as we had before.” – Aaron Dessner

“I spend more time trying to avoid bad lyrics. So often things that I think sounds like a great lyric, I write down and put a star next to it and think, ‘Oh my god, that is going to kick ass somewhere.’ But no matter how you come to it, it sounds like an all caps Song Lyric.”

The single Fake Empire, the album’s opener, proved to be one of the hardest to write, metamorphosing through many variations until the band felt happy. “There are many variations of that song that were just not working,” Berninger explains.

Recording Boxer, the band broke deadline after deadline. “There were many times when we though that we were meant to be done by this date, but we kept pushing the date until we knew that we were confident with each song,” he adds. Berninger’s own favourite? Slow. “It has a particular weird charm and beauty to it,” he says.

He is right, but let’s hope the title is not prophetic of the wait we will have before their next album.

The National’s Boxer is out now through Beggars Banquet. Tour dates and further information can be found here.