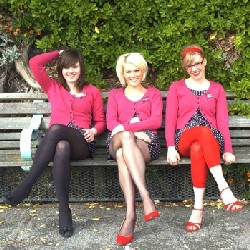 Of all the bands making musical waves in 2006, the most distinctive – both musically and aesthetically – have to be all female trio The Pipettes, who formed around three years ago in their native Brighton.

Wearing matching polka dotted dresses on stage and creating a sound reminiscent of Phil Spector/Joe Meek produced girl groups of the ’50s and ’60s, they are a far cry from any sort of Libertines regurgitation or synthesiser happy, ’80s worshipping fodder.

And this is certainly something that hasn’t gone unnoticed by the public – their last two singles have both charted in the Top 40, and their debut album We Are The Pipettes is expected to establish them as a premier pop force du jour, to be spoken of in the same breath as the much vaunted likes of Lily Allen, Girls Aloud and Sugababes.

But where did all of this come from? How did a group of small-town girls find themselves in the position that they’re in today, one where they’re releasing a debut album on a wave of hype, with every show they play packed out with enthusiastic fans of both sexes?

It all began, quite unremarkably, in a pub, so the three confident and articulate girls tell me during our chat before their recent headline show at London’s KCLSU. Original and now erstwhile Pipette Julia and Bobby, guitarist in their backing band The Cassettes, were mulling over a pint and discussing ’60s girl groups and number one singles. Finding a happy medium between the two concepts, they decided to form such a group in an attempt to achieve just this, a chart topping 45.

With the subsequent recruitment of Rose and Becki, this vision to storm their way into the public’s consciousness was in place. Julia decided to leave the group, however, in early 2005. “About a year and a half later Julia wanted to leave to form another band, The Indelicates,” explains Becki Pipette.

This made way for Gwenno Pipette, a former Welsh TV presenter and singer, who was recruited whilst the band were on tour. “We did a gig in Cardiff supporting The Go! Team, and Gwen came to see us, and we kidnapped her and forced her to join The Pipettes!” Becki continues.

“I reacted immediately to what they were doing,” Gwenno adds. “It was just really nice to see girls like me being on stage and just doing what they want to do, and enjoying themselves as well, not being too self conscious about it – it was really refreshing,” she continues.

“We’re really bored with bands that just get up on stage and look like they’ve just rolled out of bed.”
– On wearing those now famous polka dots.

And what are they doing? I mean, who came up with the idea of these dresses?

“It’s to do with the fun of dressing up,” claims Becki. “We’re really bored with bands that just get up on stage and look like they’ve just rolled out of bed, and throw their guitar on and moan about their day. It’s just not very appealing in the slightest, and we wanted to bring a bit of thought back, in the same way that The Darkness did it, even The Hives as well on a more minimal scale…taking a pride in your appearance and actually performing, putting on a show.” “Yeah, putting on a show,” Gwenno agrees. “And treating your audience with a bit of respect as well, making the effort.”

What about musical influences? Have they just been locked up for too long in a room with dusty old LPs by The Ronettes and The Shangri-Las?

Rose Pipette explains: “Between us all we all have a really wide range of influences, from folk to hip hop to punk, and everything around that and in between. Obviously as a band we’re looking to write perfect pop songs, in a way. And that’s like something that binds us all together; we’ve all got this one big focus to achieve something.”

Pausing for thought, she continues: “I suppose in that sense we’ve obviously got all the late 50s/early 60s girl bands as a starting point, but around that there’s stuff before and all the way up to now that kind of filters through, I think. So we’re not just fetishist about this one time…”

“It’s quite funny when people don’t take us seriously really, because they haven’t understood the concept of what we’re trying to do.”
– A firm message to any potential doubters…

Indeed, this isn’t merely a kitsch re-hash of a sound of a bygone era; it’s more of an updated version for the 21st Century, MySpace savvy generation.

Says Rose affirmatively, speaking of the recording sessions for their album: “We were really keen on making sure that we created a sound that would just be ours, and it would be impossible for us to really replicate a Phil Spector record. We weren’t working in a studio full of analog equipment or any of that stuff, and we didn’t really want to make it that way, we wanted to make it something that would be relevant to now, and I think it was great that we had two producers that really understood what we were trying to achieve…”

Going back to the idea of the perfect pop song, the girls remain modest when asked about whether they’ve found the formula for that magical three minutes. “I think we’re quite hard on ourselves and perfectionist with regards to the music that we’re making,” muses Gwenno. “Who knows, we’ll never be happy, you can never be happy with what you’ve written.”

They go on to describe this perfectionist ethos in practice, a process that involves the three Pipettes as well as all four male members of The Cassettes.

“You just write about anything, and you bring it to The Pipettes forum, so to speak, and then it doesn’t become your song whatsoever. It just becomes a Pipettes song, and then once it’s a Pipettes song, anyone can go ‘that bit’s crap’, ‘we need to change that bit to this’ – it literally is that brutal. But it needs to be brutal, because if it wasn’t brutal, it wouldn’t become a good song,” Becki explains.

It appears this cutthroat attitude has paid off, too – their album is a sumptuous pick ‘n’ mix of fun, catchy, carefree pop songs that are sure to soundtrack many a summer heat wave and beyond. But of course, there will always be detractors claiming it ain’t all that, and in the case of The Pipettes, mere novelty and little more than frivolous nonsense.

“Popular music just seems to be disappearing into this horrible abyss, and we’re trying to claw it back!”
– All hail The Pipettes, self appointed saviours of good pop music.

And as you’d expect, they remain defiant. “You always get positive and negative reaction to what you do,” states Gwenno. “But because there are three of us we’ve got some kind of barrier towards anybody. And it’s quite funny when people don’t take us seriously really, because they haven’t understood the concept of what we’re trying to do,” she retorts.

Being different was all part of the original plan anyway, says Rose: “It was really big part as to why we started the band in the first place, it was almost like a reaction against a lot of what was going on in the music scene.”

But perhaps their role is a far more fundamental and important one. Becki agrees: “Popular music just seems to be disappearing into this horrible abyss, and we’re trying to claw it back!” she enthuses, outlining their manifesto in one foul swoop.

“Maybe we should make our own Pipettes show,” she continues, spurred on by her previous comment. “We do want a brand; we want to branch out – clothes, TV stations, fast food restaurants, rizlas…” Gwenno speculates, to chuckles all round. Malevolent laughter or not, it would seem that this great pop experiment is merely in its infant stages.

The Pipettes MP3s or CDs

The Pipettes on Spotify