The Rapture: “It’s about loving, having a good time, and having a party” – Interview 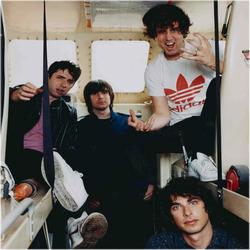 New York City’s favourite disco-punks The Rapture‘s breakthrough album Echoes, released back in 2003, won them critical acclaim and commercial success both in the UK and Stateside and has already proved to be a massively influential album of the noughties.

After almost three years away, they’re set to return to the fray in September with their Danger Mouse, Paul Epworth and Ewan Pearson (blimey, chaps) produced third effort, Pieces Of The People We Love.
Comeback 45 Get Myself Into It showed them in typically fine fettle, and displayed it’s been very much business as usual at Rapture HQ, as well as suggesting the anticipated long player should turn many heads once again upon its release.

musicOMH thought it was high time to catch up with the band to ask them about the topical POTPWL, what theyve been up since they’ve been away and their hopes for replicating previous success.

In a five-star boutique hotel in Shepherd’s Bush, I’m ushered into a room where all four band members have been sat doing interviews for most of the day during their brief promotional stay in London. I inform them the chat’s going to be, predictably, centred around the new record, and all four nod their heads almost in unison, preparing themselves for further interrogation.

I begin by suggesting the record’s title is quite a personal one, at least on the surface, and ask them if this was meant to be the case.

“I don’t think it’s supposed to be as personal as it sounds,” offers saxophonist Gabriel Andruzzi. “Personal means it’s above love, but it’s about loving, and having a good time and having a party – which is actually what we envisaged more,” asserts their fantastically named and very chatty drummer Vito Roccoforte.

This is something that’s certainly evident from the funky, hugely upbeat and disco friendly first single that’s been on heavy rotation in alternative circles in recent weeks. But how does the new record differ from the last one the whole?

“It’s about loving, and having a good time and having a party.” – The band explain the title of their new LP, Pieces Of The People We Love

In an effort to obtain a slightly more incisive response, I suggest that the new single might perhaps herald a more pop based direction for the band, after the relatively challenging offerings contained on their debut.

“I think the album is probably more poppy overall but Get Myself Into It isn’t the best example,” Roccoforte muses. “Maybe pop has come a little bit closer to what we’re doing at the same time, and I don’t think it’s that far out,” declares Safer, more or less agreeing with my suggestion. “We’ve grown, and the record is different than what Echoes was,” he continues.

“I think it’s a little more centred a record than Echoes was,” Roccoforte interjects. “We wrote like 30 songs, so like we had a lot of material this time to go into the studio with and we had a lot more songs to choose from. So the album I think has a little more of a focus to it.”

This should come as little surprise – a band who enjoy success with a particular record will undoubtedly have more time to play with and more money to throw around when they approach that invariably ‘eagerly anticipated’ follow up. The fact that it’s taken the best part of three years to see the light of day certainly suggests as much. But they insist they were hardly sitting on their backsides for all this time.

“I think the album is probably more poppy overall.” – On POTPWL in comparison to Echoes

“The three years thing is always funny,” Andruzzi states. “People say it’s taken us three years to make this record, but we toured for a year after (the last one), we took some time off because we couldn’t stand to be around each other, and then it took a little time to warm up! It took about a year of writing before we actually went back into the studio.”

“The whole album was probably a year and a half, from when we really started writing to when we finished,” Roccoforte clarifies. The band members then turn to their so far silent front man Luke Jenner, eager for input. What does he think are the differences between the two records?

He pipes up: “Mattie (Safer) sings on five songs on this record, and people aren’t really aware that he even sang very much before – whenever I bring that up in interviews, people are like ‘oh really?'” he cites, quite specifically. Safer nods in agreement, before informing me that he’s assumed vocal duties occasionally on the last two albums as well.

And were the band influenced by anything in particular during the writing and recording process, be it other bands, world events, the Californian (where the album was partly recorded) sun or anything else?

“In California it rained all the time!” laughs Roccoforte. “I found the greatest inspiration in the other three guys sitting here,” Safer declares, matter of factly.

“The shows here were just bigger and the response was better, and just more.” – On playing in the UK compared to the US

Roccoforte takes over: “I think the influences on this album were a lot, because everyone contributed a lot more equally their personal influences which are all different. It’s hard to pinpoint, but for each song everybody had a bunch of different references that they were calling from that kind of got mixed together.”

Much has been made of the high profile producers the band employed for this record, to perform this very task of mixing everything together. The Chemical Brother tweaking Ewan Pearson, along with men of the moment Paul Epworth and Danger Mouse found themselves behind the desk, and represent something of a fantasy trio people might come up with to re-work their favourite band. But how did this all come together logistically?

“We worked with Paul and Ewan in New York for five weeks, and then we went out to LA to work with Danger Mouse for two weeks,” Safer informs.

“The common misconception is that Paul and Ewan are two different producers,” Jenner states, trying to set things straight. “But in fact they’re just one team. Not in general, but just for this record they were. We did the majority of the record with them. As for working with Danger Mouse, we just wanted to mix it up a little and do something different.”

And what did these big names bring to the record? “They all brought some perspective,” says Safer assertively.

“Press makes a really big difference, and we just got a lot of press in the UK early on, and there isn’t the same kind of press network in the US.” – On their fast track success in the UK

He continues: “We were pretty good going into it as far as the songs were good, the arrangements were there, but I think they helped refine the focus at some points, or helped us step back for a minute, or stepped back for us and saw how to tie together things that were more or less working, but not. They were the ones that made sure that it sounded good – they were the engineers, and the ones that found how to marry it all together.”

And these songs of which they speak are soon to be thrust upon the public – along with the release of the album, a full UK tour is penned in for the autumn in support of it, their first for over two years.

They’ve got fond memories of the last time they toured these shores. “When we started out, we played a lot more in the UK than even we played in New York. The shows here were just bigger and the response was better, and just more,” Jenner reminisces. “Press makes a really big difference, and we just got a lot of press in the UK early on, and there isn’t the same kind of press network in the US.”

On whether they’re envisaging the same type of success as before, Roccoforte says tentatively: “You just never know, we like the album, we’ll put it out there and see what happens…”

However, he remains upbeat and positive as ever: “I’ve heard there’s a lot of young kids coming to shows, not only in London, but in a lot of towns they’re really starting to come out, so I’m excited!” And with their single and album expected to chart highly, several dates on their October tour long since sold out and a general buzz surrounding their return, I’m guessing he’s not the only one to feel this way.

The Rapture MP3s or CDs

The Rapture on Spotify