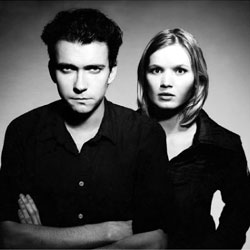 Danish duo The Raveonettes lay claim to the throne of The White Stripes and have much common ground with other bands prefixed by “The”.

Their debut album Whip It On clocks in at just 21 minutes, with no track over three minutes long. All the songs are in B minor and none use more than three chords.

It’s a dreary cold night in Kings Cross, London. Like something out of a sinister B movie, the odd car howls by, while homeless people take refuge on dark litter-polluted pavements. A fitting setting for Danish him’n’her duo The Raveonettes, who as we see later in the evening, have a penchant for the decadent side of living.

In its years as a platform for upcoming bands to showcase their talent in the capital, the Water Rats has played host to debuting artists from the likes of Alice in Chains, Oasis and most famously, was the stage for Bob Dylan’s first UK appearance on 22 December 1962.

Vocalist/guitarist Sune Rose Wagner takes no notice of this fact, his thin figure brooding at the bar, scanning the collection of youth, age and industry types in the venue.

Whilst his band has not been hyped to stratospheric proportions, there is a genuine buzz of expectancy tonight. His other half, vocalist/bassist Sharin Foo, pays no attention to her surroundings, and happily chats with her crew.

“I see us as an extremely good rock’n’roll band.”
– Sune, The Raveonettes

“I think that people are very curious about music in the UK,” reflects Sharin in the confined surroundings. “It’s definitely more than if you go to Denmark.”

Indeed, people are getting curious about this Scandinavian duo. They were requested by Supergrass to accompany them on their arena tour, and were tipped as one of the bands for 2003 by Rolling Stone (who have also declared them as “the best new garage band”). Likened to the Jesus and Mary Chain and Blondie, who are the Raveonettes and how are they reacting to the interest they are stirring up?

“It’s actually an old girl’s name, called Raveonell,” informs Sune. “When we saw it we thought it made sense. We changed the “ell” to “ettes” in homage to The Ronettes. We added the “e” and “o” for “rave on,” you know, Buddy Holly.”

What about the labels and comparisons?

“I think it’s great,” the guitarist continues. “Those are great names. but I don’t really see ourselves as part of some new garage scene. I see us as an extremely good rock’n’roll band, and like a classic rock’n’roll band. When the time comes people will be able to see that.”

“We’re kind of on a road movie
if you listen to the new album”
– Sharin, The Raveonettes

The band’s Whip it On EP, recorded in 2001 but only released commercially in January 2003, provides a taster for their imminently due debut album.

“We did most of it in Denmark, but we did some vocals and stuff in New York. It’s an amazing album,” deliberates Sune. “It’s really an industry buzz thing at the moment. It’s gonna be great to go out on the road.”

With the industry embracing rock’n’roll at the moment and bands like The Strokes, The Hives and The White Stripes ruling the airwaves, how do The Raveonettes feel about riding the bandwagon?

“I guess this whole rock and roll revitalization gives us some momentum to get the spotlight. But I think our music is pretty timeless,” replies Sharin, “I think it would have happened anyway if rock’n’roll wasn’t out there.”

I like all those bands,” elaborates Sune. “I just think it’s great that rock’n’roll came back, or is in fashion. I like a lot of music. I like pop music too,” he continues. “I’m a music lover; I just go for what I think is good. The White Stripes and the Strokes are definitely good bands. I think its cool.”

Some sections of the press have labelled the duo the “Danish White Stripes.” But as Sune argues, they are anything but. “I would say it’s because when people see photos of the Raveonettes, because it’s Sharin and I, of course they’ll think ‘okay, girl/guy, new garage label’. But the music has no comparison at all.”

“Live, what we do is more,” he explains. “We have a drummer, another guitar player, samples and stuff like that. I think it’s only when they see a picture they think, “Well it’s The White Stripes.”

So are Manoj (guitar) and Jakob (drums) now part of the full band? “The Raveonettes is just Sharin and I,” Sune corrects, “They help us out live to give that little bit of extra heaviness to it. But in the studio we use samples and the drum machine.”

And their influences are eclectic. “Everything from Buddy Holly and the Everley Brothers. From the early sixties to the Velvet Underground and Suicide. Just everything influences us, like film noir and beat literature. Everything we’ve come across,” Sune details. “Travelling around, being on the road,” Sharin adds.

On the Road. Jack Kerouac reader? “I do… a lot,” Sune confesses.

“We’re kind of on a road movie if you listen to the new album,” Sharin reveals.

Decadence and the darker side of living is indeed a Raveonettes forte as their EP tracks Cops On Our Tail, Beat City and b-side Somewhere In Texas document.

As for the band’s aspirations, what is their definition of success? Playing stadiums? A giggling Sharin replies, “I don’t really look at success in that sense, but we’re playing Wembley Arena!” – in reference to the Supergrass support stint. “I don’t know…”

“We’re going for the greatest hits!” declares Sune. “Then we know we’ve had success!”

The greatest hits set may be quite a way off for The Raveonettes, but if their intoxicating brand of raw rockin’ psychedelia is anything to go by, then 2003 should see them prove to the world that Denmark exports much more than bacon, Carlsberg and Peter Schmeichel.

The Raveonettes MP3s or CDs

The Raveonettes on Spotify