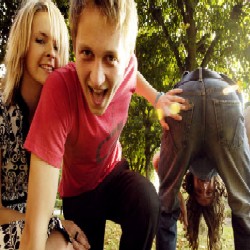 One of the more successful bands in 2005 were undoubtedly Home Counties trio The Subways.

Riding on the coat tails of their post Glastonbury fame, they released a fine debut album in Young For Eternity, and toured incessantly around Britain and Europe, even venturing to the Far East.

Indeed, the last time musicOMH caught up with Billy Lunn and Charlotte Cooper, they we gearing up to play in a pub in front of a 100 fans.
Now, they’re virtually household names, are selling out tours in advance and have even appeared on hit American TV series The OC.

So what’s changed in the world of The Subways? Before a recent show in Nottingham’s Rock City, we attempted to find out.

On first impressions, it seems not an awful lot. As I enter the dingy backrooms of the venue, I’m greeted like a long lost friend. Billy and Charlotte’s answers are not for a second dull, often full of thought, charisma and enthusiasm. They’re still exactly the same couple who I met in March, not at all jaded by the pressures of increasing fame, even appearing delighted to be in my company. And they’re still finishing off each others sentences, which you’d expect from a recently engaged couple.

I begin by asking them about new found fame and fortune, something they’re refreshingly modest about.

Although clearly pleased with their commercial and critical success, Billy is keen to stress that Young For Eternity is only an initial splash on The Subways canvas: “I’m completely content with the reception its had, but to us it was always an introduction. Our definitive record was never going to be our first record, because we’re a band that’s keen on developing and growing organically and gradually, by putting in the hard work and really honing our craft.”

“Reading and Leeds for me was a real turning point”
– Billy Lunn on one of 2005’s high points.

As for the sold out shows and sing-along inducing festival appearances, has any moment stood out as being particularly special?

“Every night’s a memorable show!” remarks Charlotte, smiling. This may well be the case, although Billy is keen to highlight a more specific event: “Reading and Leeds for me was a real turning point, because the album had just come out and all these people were there to see us, you know, climbing the poles to get a look at us – that’s the kind of thing we were doing three or four years earlier!”

Charlotte continues: “Every night there’s something really different or quirky that will happen that you’re totally not expecting.” “I think we’re always surprised, we’re always shocked, we’re always awed,” adds Billy. “Which is what keeps us going, really,” concludes Charlotte.

Last time we met, Billy was especially enthused about the prospect of heading to Japan to play a festival. So how did this turn out?

His eyes light up: “Japan was absolutely mental! We were the first on at Summer Sonic festival, and we got the biggest crowd – 12,000 people in one venue and 10,000 in another. It’s quite hard to describe the feeling when you see 12,000 people all jumping up and down at the same time singing the words – and they’re all signing in a language that’s not domestic to them. It’s like us singing something in French!”

Good receptions aside, it’s not all smiles and cuddles whilst on tour. Spending such a great deal of time together must precipitate a fair share of petty arguments and fall outs.

They’re quick to agree: “It adds to the spice of touring!” says Charlotte, putting a positive spin on things. “Me and Josh being brothers, we’re always at loggerheads,” Billy adds.

“It happens with any situation – if you’re put with people for a long period of time, you’re always going to get disagreements aren’t you?” offers Charlotte.

“I think we resolve it when we go on stage”
– The Subways guide to personal reconciliation.

Not to say that they don’t have a method of putting differences behind them. “I think we resolve it when we go on stage. If we have any disagreement we just look at each other, and we’re exerting so much emotion and energy – you can’t hold a grudge, you can’t hold anything, because it all just spills out through the guitars and the microphone and the drums and the bass. That’s what keeps us kind of balanced. If we weren’t on the road, we’d all have killed each other by now – guaranteed!”

With the UK, Europe and Japan already covered, their sights are now set on the rest of the world, in particular the illustrious US market. No doubt they’ve received a giant boost by appearing on The OC, where they play a gig at Newport Beach’s fictional venue The Bait Shop. With competition for such a slot as fierce as ravenous lions, how did they get chosen?

“The musical directors of the program just got sent our album, and they just liked it and they wanted us on the show,” reveals Charlotte. “But we looked at the list of bands that they turned down for us, and it was just weird!” Billy continues.

Care to enlighten us as to who they were? “I don’t want to say,” he remarks sheepishly, “But they’re quite big!” On the filming itself, he states: “It was such a weird experience for us. We were excited, anxious, a little dread – just because we weren’t sure what was going to happen. We were really paranoid, but we went there, and had the most fantastic day.”

He continues, mentioning the significant impact this may have for their Stateside prospects: “We were at LAX, and we were about to board the plane home, and we kind of turned to each other and said that’s probably the biggest showcase any UK band has ever had in America.”

But they’re not going to rest on any laurels, says Charlotte: “While we’re totally grateful for the OC performance, we don’t want to be known as the OC band. We’re still going to go over there and tour really really hard and build it up in just the same way.”

Which brings us to the topic of the future, and in particular new material. Even with such a hectic schedule, they inform me they’re constantly thinking about a follow up. “I wrote a song this morning, I’m constantly writing for this second record. We’ve got about 12-13 songs that we’re really, really confident with, and I’ve got probably 10 more that I want to work on.”

“We kind of turned to each other and said that’s probably the biggest showcase any UK band has ever had in America”
– The Subways on their appearance on The OC.

And it’s going to be a very different affair from the first record they tell me, saying they’ve got heavier, softer and even dancier stuff in the pipeline.

“We’re going to go in a totally different direction with everything – get a new producer, new people to work on the art work, and just totally make a departure. We always say there’s no point in making Young For Eternity 2,” Charlotte affirms. “We’re going to be Madonna without the copious amounts of clothes changes!” smirks Billy.

And with so much already achieved in such a small space of time, what are their plans and ambitions for the next year or so?

“I think just working as hard as we possibly can, without dying! And always, always trying to write the best songs we could possibly make. And just to come out of our shell a little bit more,” explains Billy, which equates to very good news for the rest of us. With overseas touring taking them through the festival season, and a new album slated for late 2006, their future remains as bright as ever.

The Subways MP3s or CDs

The Subways on Spotify