The Walkmen: “Some people just live on buses and have people to lay out their clothes” – Interview 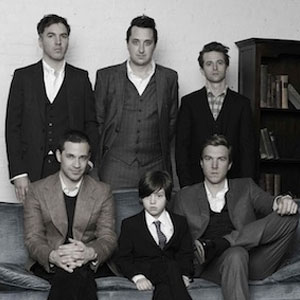 Every reasonably successful band has that song, the one that means a certain section of their audience won’t be happy until they hear it. Those songs are the sons and daughters of Freebird. For Radiohead, it was Creep. For Nirvana, (Smells Like) Teen Spirit. And on a smaller but no less niggling level, for The Walkmen, it’s The Rat.

Pete Bauer of The Walkmen says that while The Rat has become a little bit vermin-like for the group, they don’t begrudge playing it. “There’s always some loutish guy yelling about The Rat… while you’re playing it. It’s not that big of a deal or that big of a song. If it was bigger, I’d be more into it. There’s a lot of songs that have a feeling that’s unrelated to what it is to us.”

And The Walkmen have done much, much more than that indie disco perennial. They have a catalogue that stands out for its consistency and quality. Their new record, Heaven, slots into that nicely, showcasing a band a long way from the arrogant, angry punks of the Bow+Arrows days.

“We are very different,” Bauer agrees. “It’s (been) a long time. I’m surprised by how much has occurred in those 10 years. When Bows+Arrows was out, we were much more youthful, aggressive, arrogrant rock band. We definitely had a lot of that. It’s been a long time since then.”

For all the soul searching around old records and incarnations passed, The Walkmen have always revelled in nostalgia. They recently played their debut, Everyone Who Pretended To Like Me Is Gone, at four shows in the US to celebrate its 10th anniversary and, by all accounts, it was a blast.

“I feel like you run from certain old songs,” says Bauer, “but looking back we don’t care as much and it’s nice to play them again in a different light. Those were really fun for us. We had one show where I was trying to whisper the lines to Ham (Hamilton Leithauser, The Walkmen’s lead singer and lyricist), because he’d forgotten them…”

The present is exciting though and Heaven opens with The Walkmen in brilliantly meditative form, singing: “I don’t need perfection/I love the whole…” So how true is that? “I really love that line. I think it’s the best one on the record. You’re trying to get an experience of what is actually happening instead of shooting for perfection. It’s much more interesting than some high-minded idea of brilliance.”

Does that say something about how The Walkmen work in the studio? “You can definitely overthink things. When things go well and you can not stress it, that’s a better way to be. You have to let go and be surprised.”

The album was written as most recent Walkmen records have been, with songwriter and guitarist Paul Maroon sketching outlines for the rest of the band to fill in lyrics and parts. Sitting in a hot van on a warm summer morning, Bauer says that’s the secret to the band’s unity. “We didn’t see each other in person for an entire year. It helps a lot to not spend time all the time. The internet keeps this band going! Compared to old days, it’s night and day. You get your own life. You need to keep your own life.”

This evolution of the band’s working practices was, he says, necessary. “We went through a phase where we decided being in a band was a stupid thing to do with our lives. You start questioning. It’s fun. Then it stops being fun. Some people just live on buses and have people to lay out their clothes.”

Bauer says the rarified existence experience by some mega-bands makes for really boring songs. “It’s hard to write songs that mean something when you constantly travel. It becomes harder to have something to express. You go on these big rock tours, it’s so dark and dull.”

Have The Walkmen done a lot of support slots? “We’re the opener!” laughs Bauer “We’ve done a lot with Kings Of Leon and we’re doing Florence And The Machine this summer. We toured with (Bella Union labelmates) Fleet Foxes and that was a totally different story. It’s wonderful playing to 5,000 people that are attentive. But touring definitely feels like you’re in outer space. We keep it real and we have our own little thing going. It makes sense.”

“There are times when you get asked, like, ‘What drugs are you doing right now?’ Dude! I’m not doing any drugs! Who asks that shit?” – The Walkmen’s Pete Bauer on journalistic non-sequiturs

And what about having to do stuff like this, interviews with journalists babbling down a phone line? “There are times when you get asked, like, ‘What drugs are you doing right now?’ Dude! I’m not doing any drugs! Who asks that shit?”

Bauer also explains that the whole interview process often simplifies what creativity actually means, demanding narrative and explanation for things that don’t have the. “I have no idea what I’m talking about right now. I could say the exact opposite. It doesn’t relate to what we do or who we are. You have to do it though. You sit down and make something up about what the record is about. Naming a record is an ethereal thing. You’re lucky to make a record at all but It’s a little bit goofy to have to explain every creative.”

That said, he offers up quite an excellent explanation of why the album is called Heaven. “My idea of heaven is awareness. I was raised in a buddhist environment. It’s not a big deal, there’s nothing supernatural to it. It’s a serious, intense idea. Everyone else is episcopalian. That’s why I thought it was a good idea. It’s purely experiential. You don’t get to continue on as this whiney psychological thing. Everything we do has something to do with memory and dream.”

And what’s next for The Walkmen? Would they consider another experiment like their remake of Pussycats? Why, yes! “We talked about doing something a little more serious along the lines of Pussycats, a record or something that isn’t our songs or didn’t just feature us. When you do something like that it can be really fun. For us Pussycats was just a blast!”

The Pussycats sessions also featured an interesting face in the studio Ezra Koenig of Vampire Weekend, while he was still a humble Columbia student learning his chops in The Walkmen’s recording studio as an intern. “I remember seeing him and getting a CD-R of his new band,” Bauer recalls. “A couple of months later, they were as big as it gets. We see him all the time because he practices in the same neighbourhood. They were nice enough to open for us in Atlanta after they played Saturday Night Live. They stuck in and did this tour of dives with us.”

Heaven for The Walkmen may not be playing such dives, but it is a little bit about making great records. On the strength of Heaven, they can start being measured up for their halos. Now

The Walkmen’s Heaven is out on 4 June 2012 through Bella Union. They play London’s Village Underground on 12 June 2012 and The Green Man Festival in August. A full UK tour follows in October and November.