Tom Jones: “The only thing I didn’t like about my working class background was that I had to work!” – Interview 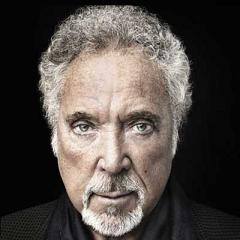 Tom Jones, these days a knight, is in London town – and the British summer has welcomed him with open arms. It’s sweltering in his hotel, the early evening sun blasting through to the reception area of his suite – but not to the suite itself, where the Welsh crooner can be found, grappling with his first beer of the evening.

Naturally it’s a Brains SA, his favourite. “You can get British beer in Los Angeles, but not Brains,” he smiles ruefully. “It is coming, though, I keep asking the fella at the liquor store. But not yet.”

He takes a satisfying swig – and offers us a bottle. He looks very well, having recently celebrated his 70th birthday. The hair is natural, and suits him – silver against a strongly rendered Californian tan. He has piercing blue eyes – possibly lenses – and a ready smile, which we see frequently. That doesn’t detract, however, from the seriousness of new album Praise & Blame, which he discusses at length.

“I’m used to projecting, but with this album I tried to contain a lot of stuff” – Even at 70, Tom Jones is entering new territory as an artist

He lays much of its success – musicOMH was amongst many to get all Tinkerbell with its star rating – at the door of producer Ethan Johns, whose previous credits include Ryan Adams and Kings Of Leon. “Ethan is a great producer,” gushes Jones, “and when we did What Good Am I, we didn’t have much reference, as it’s a Bob Dylan song – and Dylan throws everything away when he sings it. So he suggested I do it pretty low, and to try and contain it as much as I could vocally, which I’d never done before.”

He admits this was difficult, “because when I go up, the whole voice opens up, you know? But he said if you can just try and hold it down, let’s see what happens with it. And it worked, because it’s like the saying – less is more.”

The instrumental arrangements are key in this respect. “It gives me room,” Jones agrees. “Sometimes if you try to sing that quiet with a band it doesn’t always work. I’m used to projecting, but with this album I tried to contain a lot of stuff, and I think it becomes more personal”.

Was that so much against his natural instinct? “Yeah, it was. I’ve sung quietly before – I mean, The Green Green Grass Of Home is not a loud performance, because the song doesn’t ask for that. But when I start to go up, my natural instincts would be to get louder, but I don’t, so it’s – ” he pauses and smiles, pointedly – “unusual for me, that I don’t.”

He laughs and takes a glug of beer, before moving on to discuss how the songs, all covers, were chosen. “We wanted them to be meaningful songs, and Ethan was concerned about that as much as I was. When he first heard Did Trouble Me, it was a girl that did it – the name escapes me at the moment”. Susan Lerner it was who did the song, and Jones describes it as “more folky, and inevitably more girly. When we tried it he said, ‘I get it now’. And so it was testing the waters, for me and for him. I didn’t want it to be background music though. I wanted people to hear it and say ‘What is that? Let’s turn it up!'”

Much of the album’s material carries with it a religious air. “I wanted to make a gospel album,” he explains, “and I thought, ‘Wait a minute, it’s going to be Christian’. And then I thought, ‘Well I am a Christian!’ I’m sorry, but I am! I’m not preaching here, I’m not trying to get Muslims to become Christians or anything. But as soon as people hear it they know what it is, and it’s a gospel album. I don’t see anything wrong with that.”

As the title implies, however, it’s not a one way street of open adoration. “There’s questioning in it, you know? Like Burning Hell, which says maybe there ain’t no heaven. It’s not all like ‘I’m a good Christian’ and all that, there’s some powerful thinking in there.” A similarity to the Psalms of David perhaps? “That’s why I called it Praise And Blame. Good and bad, you know? If you have one there’s always going to be the element of the other. You can’t have praise all of the time, you’ve got to take some blame.”

“That’s about a person who gave his life and soul to music, and partying too much, and lost his wife and son through it. That’s what that song means – and it could have happened to me” – Tom Jones is close to home on the material in his new album

It’s a heartfelt statement, and an indication that these songs are among the most emotional he has yet sung. “Yes,” he says forcefully, “they are, and even though I was there, recording the songs, when I hear them even now I get caught up in them like a listener would. It does move me. Something happened, and it just came together – things happened when we were recording that I didn’t have control over. It’s strange. With some of those ballads, it surprised me that I’d gone that far. I didn’t have this vision of how it was going to turn out, but things started to happen as we went along. Ethan said we should do it live with no splicing, and once it happened it was like there was a magic – not on every take – but everyone was like ‘Wow!’ when we took What Good Am I and heard it back. These guys, they put a lot into it and it was tremendous.”

With past career about-turns in mind, such as Kiss, If I Only Knew and Sex Bomb, does that mean it’s become an instinct for him to take risks in music?

“Yeah, I think so. I like trying things I haven’t done before. Sometimes they work – and sometimes they don’t. Thank God I’ve never had things where people have gone ‘oh, fuck me’ – it’s never been that bad. But I did do an album with Wyclef Jean, and I loved it. When I was doing it I thought this is great, but then afterwards when it didn’t sell as much as I thought, I questioned it, and people said ‘It’s not you’. I always play stuff to my wife, because she’s a good critic, and she said, ‘Who are you aiming at with this?’ And I said, ‘Well I’m not aiming it at anybody, I never have!’ And she said, ‘Well there’s kids that do this stuff, and really good too! What are you adding to that?’ But she was right, and this album sounds like me – although I’ve taken a different direction.”

Jones is a natural and enjoyably garrulous talker, but when asked if he takes the same risks in life as he does in music, he slows somewhat. “Not really. Musically I have a fair idea about what it’s going to be like, especially when I listen to it back. But in my life, I wouldn’t push things. I don’t like getting upset, and I don’t like upsetting other people. Some people like to have that bit of power sometimes, and I wouldn’t want to do that. I wouldn’t want people to dislike me for no reason. If you don’t like the way I sing I’m sorry, but that’s the way it is! But I don’t like to do that, and so I don’t take risks in life generally. Certain things I do to get things done though, like flying!”

It’s the eagerness to please that is one reason he connects directly with the man on the street. “Well I come from a working class background,” he reasons, “and I like it. The only thing I didn’t like about a working class background was that I had to work! It takes a lot out of the day. But as for the way of life, I never had a problem with it. When I was living in South Wales I had a great time playing the working men’s clubs, but I knew I had to come to London to move forward. I still like going into pubs though. I’m a people person, and I like going out and meeting people. That’s how it’s always been with me. I’m not conscious that I need to do it – it’s how I am.”

He is based in Hollywood now, but feels he is able to visit his home country as much as he would like. “Wales is always in my head. I did a British tour last year and I saw a lot of my friends, but I know I can’t stay there – I know I have things to do. There is order to my profession, so I have to keep moving. If the show’s 8 o’clock, I’m there 8 o’clock.” And will he sing for as long as he can? “Definitely. I’ve never known life without it. I dread the time when I won’t be able to sing as well, if my voice is not working as well as it does now – thank God. I would never stop singing, I wouldn’t be able to. People have got to stop me singing!”

Tom Jones’ new album Praise And Blame is out now through Island, featuring the single Burning Hell and What Good Am I? He plays a Las Vegas residency in August, then sings at the Princes Trust Gala at London’s Royal Albert Hall on 17 November 2010. More details can be found on tomjones.com.