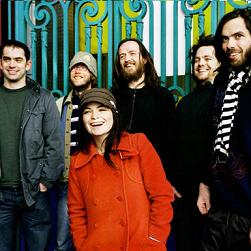 When we last interviewed Tunng, back in 2007, we spoke to Sam Genders, who spoke of the band’s penchant “to muck about, try different things and experiment”. Genders may have left, but that original spirit is alive and kicking, as we found when talking to lynchpin Mike Lindsay and now central vocalist Becky Jacobs.

We speak with them twice; first on a boat on the Thames, and secondly on the phone to the band’s studio, where they are recording. As Becky speaks, music can be heard crackling over the headphones. The Cure, Tunng-style – it somehow makes sense.

The studio, in Hoxton, is where they recorded new album …And Then We Saw Land. “We recorded the last three albums there”, says Jacobs. “Mike works here in the studio, and we’ve been rehearsing for this TV show in France, working on a cover of Close To Me. Mike and I did the Songs In The Key Of Old London night at the Barbican, and we did The Pogues‘ Rainy Night In Soho. We really wanted to do that, and especially this version – we’ve been back and forth on it, and it has Tunngish qualities now.”

The impression when Tunng talk about their recording session is of one thing – fun. Becky agrees. “We do have a lot of fun, and particularly when recording this we had a really good time. We reached a nice point with our voices working well together, and making them as strong as they could possibly be.”

But there were a few trials. “Mike wanted to re-record the songs when we’d done them, and I had to be persuaded to do that, as I couldn’t see the point of it, but it worked and we’re really happy to have got it to where it is.” Lindsay himself cuts a contented figure as he talks about his favourite new ploy on the album. “We got together a group of friends to form this big, 15-strong chorus which we added to some of the album, and recorded in disused school hall in Old Street. It was really good fun to bring those elements into our sound.”

Jacobs still regards the album with affection, thinking of the band’s upcoming live shows. “I’m looking forward to playing the new songs, we’re going to try and play them as much as we can. We’ve played the set that ends in Bullets a lot, so we really want to play the new stuff.”

This is the first tour where her elevated status as Tunng figurehead kicks in. “I’ve been a vocalist before I was in this band, and I think my vocals have reached a point where they truly are much stronger now”, she says with feeling. “I feel much more that it’s my real voice now.”

Recently Tunng performed a seemingly unlikely collaboration with Toureg tribesmen Tinariwen, who came over from Mali specially for the gigs. Jacobs and Lindsay took a lot from the experience. “It was brilliant,” she says, “and it was a lot of fun to do something different, it forced us to raise our game. Inevitably we had communication issues, as they don’t speak English, and I only work on a bit of French. The arrangement is much looser. No two versions of the songs we did were the same but that was important for us, and we had to be relaxed about it.”

Has the experience influenced the new album in any way? “There are no Malian influences on the record,” she says. “I’ve been to Malawi a long time ago. There was talk about us going to visit them but it’s not an easy area to get to. We’d love to do it, as they have this festival in the desert, and it would be amazing to go and enjoy that.”

It seems unlikely that African music could directly influence Tunng’s sound, given their perceived Englishness. “People have said that,” says Becky, “and I think it reflects our personalities as well as where we’re from. We all sing in our real voices – previously you’d have Sam’s Derbyshire accent – and that’s really important and quite folky.”

As well as four dates in the UK, recently completed, the band have big projects ahead. “After the UK dates we have hopefully a more comprehensive tour later in the year,” she confirms. “Before that we’re going round Europe for four weeks, bringing it to people who hopefully love it in other areas. Bullets was very well received in France, so that’s why we’re going there. We’re also doing lots of festivals, and we’re also going to Brazil, to do some art-ish project which sounds weird and exciting!”

The big change for the band since last album Good Arrows is the departure of Genders, but Becky agrees she has enjoyed the new dawn that has also brought. “I think that it has brought new opportunities. We’re all very close, but it wasn’t something everyone was very happy about when he left. He’s an amazing voice, but in that way he’s been more positive to me as everyone has pulled together as we’ve moved on to the next chapter. He still gives us a lot of support, though, which is good too.”

And who’s in charge in the new line-up? “Mike is really the person behind the sound of Tunng,” she continues. “He is a great mixture of being very relaxed and loose, but was also clear about what he wants. I think the recent records have become more representative of how we are as people and how we sound. We’ve done things more recently like Transmusicales in France, that raise your game as a performer and as a musician. I love performing as part of a band, it feels a lot more representative of me.”

At which point, on the boat at least, we’ve reached beer o’clock – and the Tunng twosome prepare to wet their whistles, in the same good humour as they appear on their records. Contented, yes – but still with a sense of drive for new adventures ahead.

Tunng’s new album …And Then We Saw Land is out now through Full Time Hobby. The band are on a European tour during April, then playing several European festivals over the summer. Full tour dates can be found on their website.